So today I'm making an exception to my unofficial 'no politics rule' because my heart is brimming over.

The hatred against foreigners in the UK that has followed the lies, jingoism, and misinformation touted by the Brexiteers during last summer's referendum campaign, is terrible.

As for what is happening in the US, I'm grateful that I have no family living in that country, but I'm terrified about the developments there. Trump and his policies are very dangerous for the world.

Brexit will also directly affect me and my family.

If you've read any of my novels, you will know that all of the books have one common theme: displacement. In The Englishman series Kaisa feels very much the foreigner in 1980s Britain, and as an outsider in the traditional and conservative Royal Navy community. My Nordic family drama, Coffee and Vodka , deals with the discrimination Eeva and her family face in Sweden. But being a foreigner in Britain today is worse than anything I described in those books.

So how is the Brexit vote affecting me personally?

I came to this country in the 1980s well before Finland was a member of the EU. In those days, because I had married a British citizen,  I was given 'Indefinite Leave to Remain' in the UK. This was just a little stamp in my passport but ensured that I could leave Britain and enter it again without a visa and didn't need a work permit. But when I renewed my passport, the then policy at the Finnish Embassy was that all old passports had to be surrendered, so I lost the only written documentation of my residence permit. However, by that time Finland had joined the EU, so I saw no reason to worry about my residence permit or citizenship.

At that time I was also not able to apply for British citizenship because I would have immediately lost my Finnish one, and the children their dual Finnish/British citizenships. Britain is my home, but I was born in Finland and would be devastated if I had to become an alien there. The Finnish citizenship rules have now been reformed, but as I said before, I saw no reason to change my status as a European citizen.

I didn't think I would ever have to worry about my own ability to stay and work in Britain. Until now.

As it stands now I have NO GUARANTEES that I can stay in Britain, in my home, where my children were born; where I've worked and paid taxes for the past 30+ years; where my British husband and I have lived for all of that time. I may be forced to leave the country where in a few months' time my first grandchild will be born. 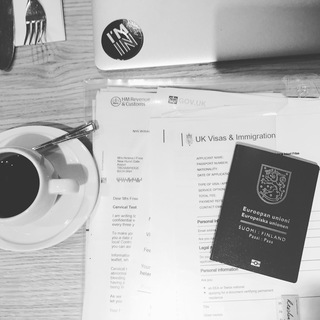 There have been many reports in the press about people in my situation who have already been asked to prepare to leave Britain by letter after they've failed the residence application with some small detail or other. As far as I understand from these reports (mainly in The Guardian) there are several hurdles you have to jump in order to be able to gain residency, such as having private medical insurance. I put my application in to re-instate my ILR three weeks ago. It had original documents from 1984 which included my marriage certificate doctor's letters and P60s from my various employers. Keep your fingers crossed that I will have filled the application correctly and that the Home Office is satisfied with my proof. I've heard from other Europeans living here that the applications are often rejected on a small detail. The appeals process is cumbersome and very costly (around £800; whereas a new application is only £65).

It's obvious Britain is trying very hard to discourage new residents from settling here, as well as those European citizens who already live and work here from gaining permanent resident's status.

I've been told taking legal advice to help me with a new residency application if the one I have just submitted is rejected. It's emotionally hard fact to swallow that I have to spend a huge amount of time and money in order to be able to travel and regain entry into a country I've called home for the past 30+ years, and for which I have already once been granted a permit to live in. And even with all the expensive legal advice, time and effort, I may not be successful in gaining residency. The rules have changed a lot since my initial move here in 1984.

Suddenly I feel very foreign in Britain when I have to prove my worth to British authorities, so that I can remain in what is my home.

Prime Minister May has been asked on many occasions what will happen to the 3 million or so European citizens who work here and call Britain home, but she has repeatedly avoided giving a full answer. And seeing what is happening in Britain today, I am too afraid not to start the process or applying for residence, and proving my right to stay in Britain. But it still feels very wrong.

Even if I was guaranteed leave to stay, my question is, why should I suddenly have to prove my worth to stay in my own home with my British husband, British children, and a future British grandchild?

And what happens if by some weird accident, sometime in the future, Finland and Britain fall out politically? Is Trump's move in the US to ban ordinary people from entering the US a chilling sign of what's to come in Britain? Could my (and my children's) dual citizenship suddenly become a problem?

This may sound mad now, but remember only a few months ago everyone thought Britain would never vote to leave the EU, and equally Trump would never become President of the most powerful country in the world.

Are you in a similar situation? Are you too at loss and frighted about what is happening both here in Britain and in the US?