There's a new kid in the restaurant block in Crouch End, called Heirloom. Both the Englishman and I have been watching the changing shopfront of the restaurant on Park Road while walking past on our way into town on a Saturday, or passing onboard the W7 bus on our way home from work. Over the months of the refurbishment, we'd heard good things about Heirloom, so when it was time to book somewhere for a Father's Day lunch, Daughter and I thought this new British restaurant would do nicely.

Reputedly this restaurant was going to use ingredients from their own farm in the not-too-far Buckinghamshire to offer fresh ingredients for a short menu. Just our cup of tea (or coffee for me...).

I really liked the decor of Heirloom. It's very pared down and simple, with wooden tables without tablecloths (but with generously portioned cloth napkins - yes!) and white walls with just the odd colourful print adorning them. There's a bar at the front where you can enjoy nibbles and drinks, and some tables at the back. We were seated at a lovely round table under a skylight. But the table was right next to a back door, with a bit of a draft coming through, which on a hot London day would have been very welcome.  But because I have been 'blessed' with another bout of frozen shoulder I couldn't sit with any kind of draft. (I know - it's depressing to have it again but at least it reputedly only hits a shoulder the once, so this should be the last time). The staff were very good about it and moved us swiftly onto another table in the middle of the restaurant.

In  spite of this, it was obvious the restaurant had been open for a matter of days, because the service was a little tentative, although friendly, which is ultimately what matters. Plus the food was - in one word - divine.

To start I and the Englishman had baby leeks with lobster, which was a combination I certainly would  never have thought of but was perfectly balanced. Daughter had fried asparagus with pork jus and breadcrumbs. I am really pushed to say which one of these was the better starter; both had a clean taste, with none of the ingredients overpowering the dish.

Daughter had ricotta-filled courgette with courgette flowers and pineapple tomatoes. Again the taste of this dish was fresh and well seasoned. 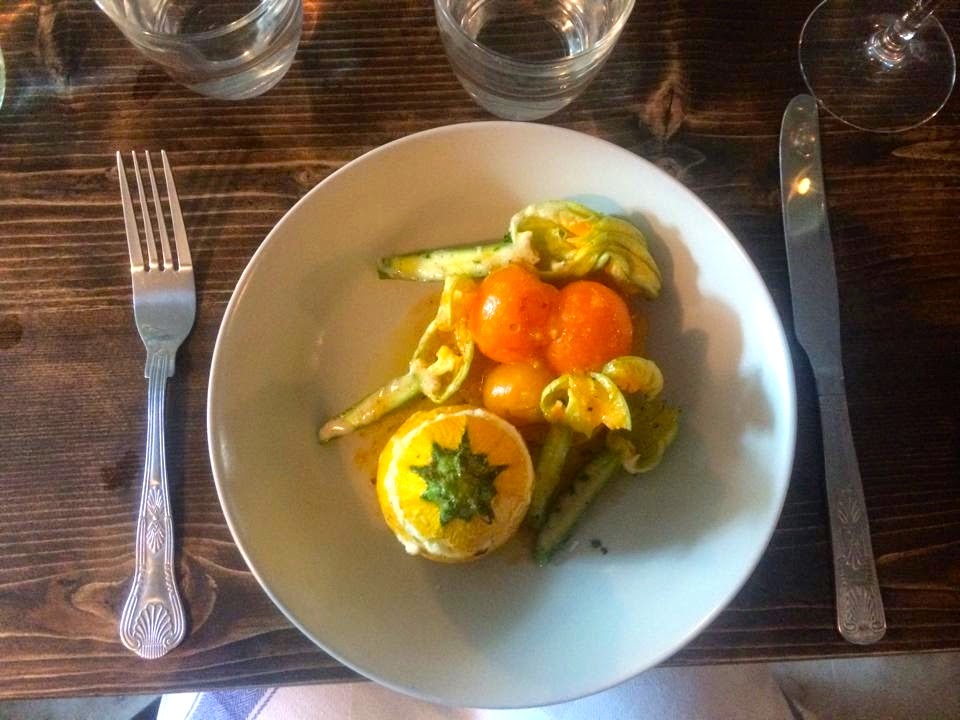 The Englishman's Red Devon rib of beef with baby beets was melt-in the mouth, and rare - or rather blue. It was just as well he did like his beef barely alive, because the waiters had not queried his preference. As I said before, there were a few teething problems with the service, something I'm sure Heirloom will put right in the weeks and months to come.

The puddings were again delicious, with the treacle tart and gooseberries getting the most votes at our table.
This is the kind of food we like to cook at home and equally delicious if we get it right on occasion. Not to be big-headed about it, but it's rare that we get the same quality British fare when eating out locally. Which is why I just had to write about Heirloom and recommend it to you all.

Oh, and the craft beer according to the Englishman was excellent too, as was the pre dinner drink of Cava Daughter and I had. Plus the bread brought to the table at the start tasted excellent with the small pot of hot pork dripping. The taste combination reminded me of the Swedish tradition of Dopparedagen when you gather around the kitchen to dip bread into the juices of the traditionally seasonal cooked ham night before Christmas Eve.

There was a definite Nordic flair to both the cooking and decor of Heirloom, which is probably why I loved it so much. It'd be interesting to find out if the restaurant has a Scandinavian connection?

With three courses, pre dinner drinks, a bottle of good quality white wine and a glass of red our bill came to just under £50-00 per head. That's not too bad for excellent food in North London.