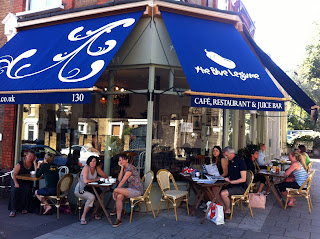 When we moved to this particular corner of North London last January, I set out to do The Crouch End Knowledge, i.e. visit all pubs, bars and cafes in the N8 area and report back to you.  But, due to some other important business (such as the publishing of my book), this task has been rather on the back burner lately. But today, to start these efforts anew, I persuaded the Englishman and Daughter to join me for brunch at the more recently opened establishment in Crouch End, Blue Legume Cafe on Crouch Hill.

I've been wanting to go to this place for some time, because when passing the place onboard the number W7 bus, I've watched people sitting at tables outside, enjoying cups of milky coffee and delicious looking plates of food. Sometimes it has taken all of my will power not to get off the bus and join them, and delay what ever trip I am making into town.

When looking at the menus today I noticed (to my slight disappointment) that the Blue Legume Cafe serves the kind of fare which most small restaurant/cafes London nowadays do. You know the kind that's called 'Modern British'; old-fashioned food with a Mediterranean twist. But since this place almost always looks full, I decided here the food must be a little more special. Or at least a good example of its kind. 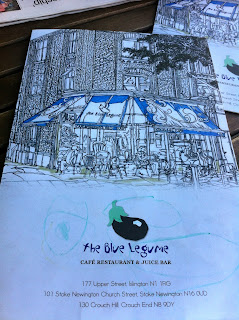 And the place is certainly friendly. As soon as we sat outside on this unseasonably tropical morning here in London, a smiling waitress came over to ask if we'd like drinks. We were given menus and (almost too) swiftly our first order of skinny cappuccino, americano and Earl Grey tea arrived.

Both the Englishman and I decided to have the vegetarian sausage breakfast, while Daughter went for Eggs Royal. All again arrived in record time and were on the whole delicious.

The poached eggs were well cooked (not a mean feat), just soft enough in the middle.  Although both the Englishman and Daughter found theirs were a little cold, mine was perfect.  The wholemeal toast was also hot and the butter which arrived was room temperature, a perfect match. I also loved the mushrooms, they weren't slimy, nor dry, which they sometimes can be, and as a whole my meal was just what I wanted on this Saturday morning.

So as the first establishment of the second leg of The Crouch end Knowledge, I would wholeheartedly recommend the Blue Legume Cafe. It's friendly, has a nice atmosphere and on the whole is as nice as it looks!

I had a brunch recently at the Ridge Cafe and thoroughly enjoyed that, as well as a dinner at Nakama which was wonderful treat.

I've also eaten at the Blue Legume, though looking back the shopping seems to have taken precedence. (The chandelier ideally suits my room)