Imagine if you will a small, almost idyllic, suburban hamlet called Crooked End. A delightful, somewhat isolated place cut off from reality by hills and intermittent, overcrowded bus services, populated largely by optimists who believe they can make a living by taking photographs, drawing pictures, grooming dogs or playing the sackbut.

Crooked End is set in the Rotten Borough of Haringtopia, not quite as perfect as Utopia, not so bad as Dystopia, named for the Old English Haring (or herring) for the catches brought home by the local trawlermen, along the nearby Stoke Newington Ship Canal , and because quite a lot of things there  smell a bit fishy.

Inevitably, our idyll will be disrupted. Along comes the wicked witch of the East, Almira Gulch, a multi-billion dollar, Hong Kong based , offshore-registered little old lady on a bike.

What Almira wants is a bit of the action as far as house prices are concerned. Just take a look at the OZed-index and you'll see why. And her definition of affordable is that someone , somewhere really will stump up that much money for ticky-tacky in a high rise.

But 'Affordable housing' is a mantra just at present in Crooked End (our well educated , well paid optimists are also champagne socialists) and its very notable absence  from the development Almira proposes causes uproar when the Town Crier bruits it abroad . This causes a spot of bother for the village elders (Hunk, Hickory and Zeke) who speak for the locals at heap big Haringtopia pow-wow. Nominally, they are supposed to believe in, repeat and , in theory, achieve the mantra. Actually, what they believe is  . . . ,well that's another question.

Up to this point the village elders had adopted a position of kowtow to the wicked witch , but mantra failure on this scale could dent their reputations, it might even threaten their status as representatives at the pow-wow. What is to be done?

Luckily, this is a fairy story, so we can expect either an extraordinary confluence of unlikely events or a handful of magic beans to bring about a happy ending. (No, not magic beans, they'd just give rise to a massive, overbearing, skyscraping thingamajig on a nearby plot of waste land.) A confluence of happy events perhaps a little like this one.

In our made-up fairy story, Dorothy, a brave local girl, in order to restore Hunk, Hickory and Zeke to their rightful status, has decided stump up the cash  for the 'affordable' herself. So, the re-appearance of 'affordable' in the scheme might be enough to get the hapless trio re-selected to stand in the "who do we want as village elders show" (Crooked End's got Talents) sometime soon.

Now, if one thought that the disposition of public money in this way had been engineered by our three heroes, one would be aghast at the brazen disregard of standards in public life. Luckily there is no evidence to suggest that any such engineering took place. The initiative has all come from a rather unlikely source, but still, if Dorothy has control over all those mazumahs, then let her dispose as she will. So can we all breathe a sigh of relief and rest assured that probity rules in Haringtopia, and especially Crooked End? Perhaps we can, even on a day when a brave campaigner takes the might of Haringtopia to court over another mass disposal of public assets.

But, can we for a moment we examine the purely hypothetical question (this is only a fairy story) relating to an entirely imaginary set of village elders "What if such a thing had been finagled by our much trusted and highly valued village representatives?" Let's look at this massive improbability from the perspective of  Nolan's 7 principles:

Holders of public office should act solely in terms of the public interest.

Find me anyone,  who would not, in our hypothetical case,  see the announcement that Haringtopia might pay Almira to provide affordable housing in her lush money spinning development as anything but an entirely self centred act of our completely imaginary hypothetical trio to gain re-selection at the soon to be held who do we want as village elders talent contest.

And just to add a bit more selfishness to our made-up case, rather than come out and say this themselves our three imaginary villains have put the words into the mouth of an imaginary paid employee, who must be either very naive or under a great deal of pressure.

Not a hint of public interest.

Holders of public office must avoid placing themselves under any obligation to people or organisations that might try inappropriately to influence them in their work. They should not act or take decisions in order to gain financial or other material benefits for themselves, their family, or their friends. They must declare and resolve any interests and relationships.

Perversely enough, the obligation here would be on Haringtopia, the gain being much better odds in the ""who do we want as village elders show" .

Holders of public office must act and take decisions impartially, fairly and on merit, using the best evidence and without discrimination or bias.

Well, fairly and on merit what possible reason can there be for giving Almira even more money than she was going to make anyway? Really and truly, (even though this is a fairy story) someone should have pressed Almira just that little bit harder and for just  a few weeks longer to stump up her own cash.

Holders of public office are accountable to the public for their decisions and actions and must submit themselves to the scrutiny necessary to ensure this.

That is just exactly what our hypothetical trio would be trying to avoid, by, in effect, buying a win in the talent show in the next few weeks.

Holders of public office should act and take decisions in an open and transparent manner. Information should not be withheld from the public unless there are clear and lawful reasons for so doing.

Again, somewhat perversely, this ruse would be so open and transparent, everyone would see through it.

Holders of public office should be truthful.

Well, slightly surprisingly, in our real world case, the truth does seem to be present. It's all there in Dorothy's letter Though she omits "in order to win the talent show"

Holders of public office should exhibit these principles in their own behaviour. They should actively promote and robustly support the principles and be willing to challenge poor behaviour wherever it occurs.

For the purposes of this hypothetical exercise, this one would need to be re-written slightly, perhaps rather as though we'd passed through a looking glass:

Holders of public office should eschew these principles in their own behaviour. They should actively deny and robustly ignore the principles and be willing to applaud poor behaviour wherever it occurs.

So much moral truth in stories for children of all ages. 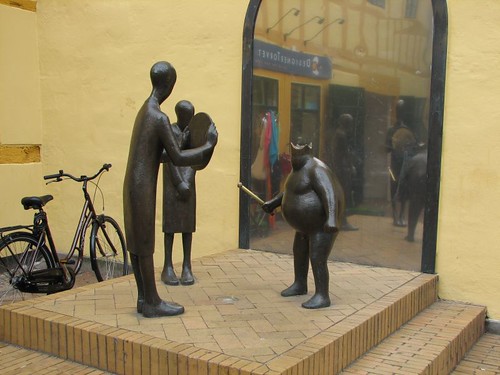 Though very sadly in the diseased dying days of Koberville this analysis by C. Northcote Parkinson is more apt.  https://forums.theregister.co.uk/post/1299065

Among the list of potential Labour candidates for May 2018 there's one person who plays and teaches trombone. I don't know if she also plays the sackbutt.

Maybe a badge "Sackbutt Players for Hornsey Town Hall" might make some sales?