Why does Chicken Town want a new business model? They never open before noon, they get the weekends off, it appears there are not really enough customers to trouble them, and Haringey keep giving them money. There was a time when I'd have settled for that.

Chicken Town had an appetising website with a tasty video.

But their experiment seems to have failed. "Seems to" because we aren't allowed to know. In the secret darkness of Koberville it's "exempt". Despite over a third of a million public cash being poured in, we must: pay no attention to the people behind the curtain.

Have they paid back any of the loan? It seems unlikely. Though I assume they had to pay their rent promptly. (To CONEL). Did they pay for the local ads? 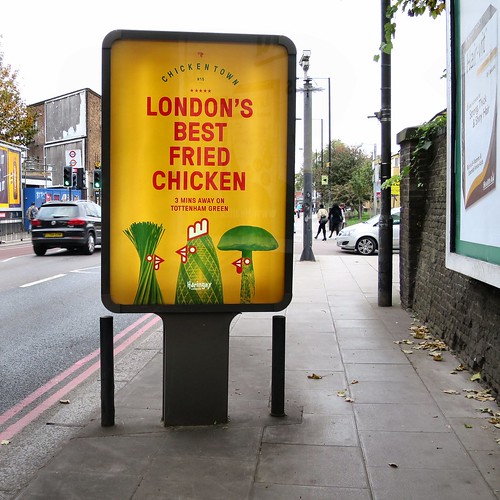 Chicken Town also made claims as a health project. For a start, it is pampered chicken.

"So, how will your chicken be different?"
"It’s from Swaledale. They’re herb fed. They are basically the happiest chickens in the world.”
"They’re free-range?"
“They’re literally pampered. They have Jacuzzis and stuff like that."

Has anyone done an independent evaluation of the experiment? You'd think that at least Public Health in Haringey would be slightly curious to know about this. So where is the evaluation? Or is that another secret? Maybe locked away under the Thirty Year rule? An experiment without an evaluation is next to useless.

I'll be frank and tell you what irritated me about this place even before it opened. Guardian journalist Carol Cadwalladr interviewed Ben Rymer from Chicken Town. He took her to a nearby Chicken shop. He could have gone to one he thought was half way decent. He could have said something about the very long hours, hard work and low wages. With the need to keep down costs. He might have gone to a place where he'd met the staff or owners and found them friendly and helpful - as a lot of people living and working in Tottenham are.
He could then have made his pitch for Chicken Town as higher quality and healthier. Fair enough.
Instead he took Carol Cadwalladr to somewhere serving chicken which : "I wouldn't even feed it to my dog.”

Carol Cadwalladr sets the scene.  "The formica tables are chipped and the floor is greasy but, for just £2, we get a huge platter containing seven spicy chicken wings and a great mound of chips.

“Look at that,” says Rymer when I bring it to the table. “I can’t even bear the smell of it. That chicken will be the cheapest of cheap. It’ll be this nasty, frozen stuff which is imported from Brazil. It’s pumped full of hormones. Ugh. It’s revolting.”
Did he know that? Is every Tottenham chicken shop serving frozen Brazilian chicken pumped with hormones?

Carol Cadwalladr tells us: "It’s the first ever time I have tried any sort of fried chicken and it’s true, it is pretty revolting. It has a spicy kick but the coating leaves an afterslick of grease on the roof of my mouth and the smell is of rancid old oil." They leave the rest.

Below are The Seven Principles of Public Life (also known as the "Nolan principles) which all councils and councillors are required to follow.

Plainly the requirement for Openness is fundamental to the others. For example, without knowing what's going on behind the curtain there's little or no chance of accountability. In this case, a realistic opportunity for Haringey residents to make informed judgements about whether or not this funding decision is objective and based on "merit and facts". It may be. But we just don't know and have no way to find out.

Just as clearly, Claire Kober gave an example of her "leadership" last night by dismissing Clive Carter's questions. It showed not only her lack of understanding of the Nolan principles, but of the events which led to setting-up the Nolan Committee. She could easily have asked him to email his questions and then sent the answers to all councillors.

THE questions I would have asked, had I been allowed to, were:

I will now ask these questions by way of a written Member's Enquiry.

Chicken Town has made it to the Daily Mail.  To quote from the article

"Taxpayers' Alliance chief executive John O'Connell told MailOnline: 'Haringey hasn't exactly covered itself in glory in recent years and residents will be furious at this latest, absurd waste of money.

'What's more, dishing out loans on extremely favourable terms to hipsters is grossly unfair on other restaurant owners in the area who have gone to the bank to get their businesses off the ground.' "

Ben Rymer, 45, opened Chicken Town in a former fire station in Tottenham, North London, two years ago and it was labelled Britain's healthiest fried chicken shop. By his own account Mr Rymer  'lives in the Philippines where he spends most of his time surfing' The Sun also has covered the Chicketown scandal here: WHAT THE CLUCK?.

Cllr. Joe Goldberg—whose pet project it was—has so far not commented, however the earlier promotion went well beyond the efforts of Cllr.Joe Goldberg. The Council pulled every media string it could and achieved wide coverage in the press. Also, in the Labour-run Council's in-house magazine and network, where the claimed-for health-benefits were puffed-up: 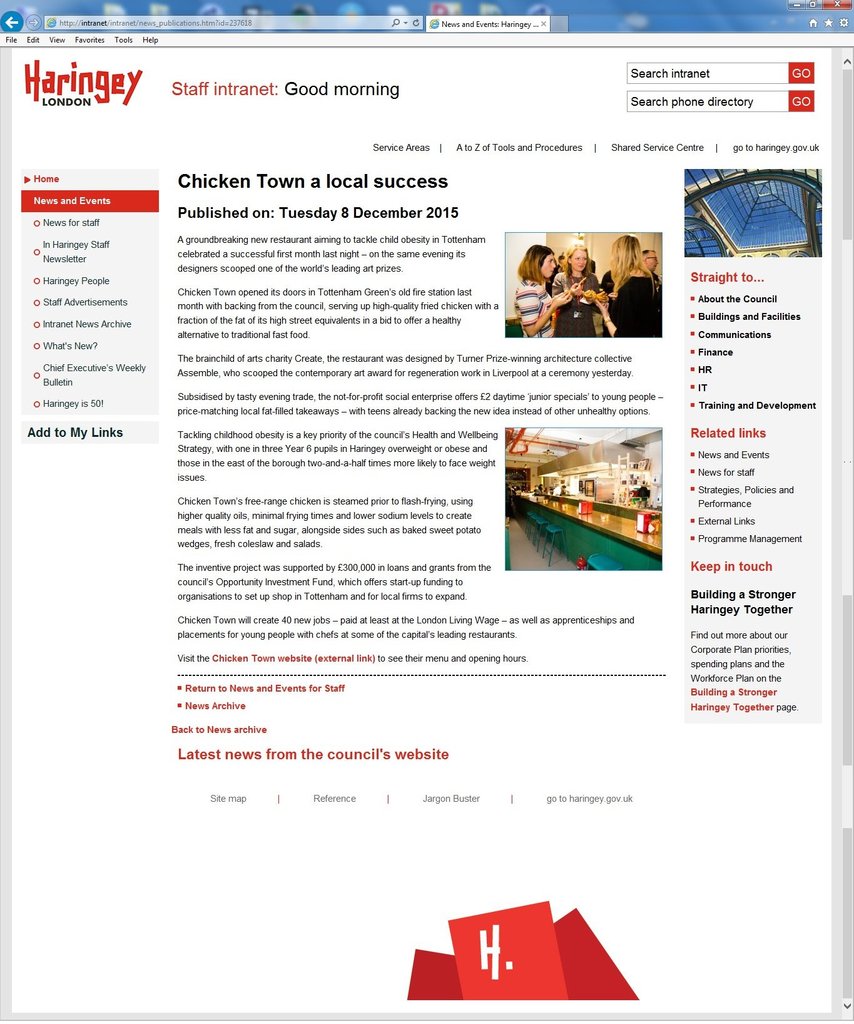 It may have been too clucking big, but Chicken Town has now failed, its last day of trading being 23rd December.

It will be taken over by Bistrotheque , whose main courses for dinner average out at a touch over £23, plus a fiver for chips.

Bistrotheque founder Pablo Flack got a slightly less than glowing review from the Evening Standard, though it was a long time ago, and the business is still running.

FROM JoGoLoGo (£86K), to JoGoSlowMoCrow (£340,000)? How much more of our taxes will the Cabinet Member for Economic Development incinerate before the next election? To be accompanied by more crowing?

I hope the new operator succeeds. I note that they have Hoxton experience and that the fare is not cheap, that will meet the Council's hipster/Regeneration hopes. However, the overriding point to remember is that the location is unchanged.

Less than five months now and we still have to suffer Cllr JoeGo's blathering boasting about his endless odious "successes" .
Though I suppose that in some ways you've got to give credit to JoeGo. Anyone else might have slunk away in embarrassment. Perhaps hoping that people would forget who was responsible for his famous flying turkeys.

Eddie Nestor said the [New Labour] Council were approached repeatedly for comment but no one was available: he said they'd chickened out. He took a particular peck at Cllr. Goldberg (the Cabinet Member for Wasting Money), who was unavailable for comment. "Brand Strategist" Joe Goldberg is normally loquacious.

Cock a doodle do!
My dame has lost her shoe,
My master's lost his fiddlestick,
And knows not what to do

HERE’s an un-retouched scan of the front page of Haringey Council’s staff magazine from 23 months ago. The lead story suggests that the fried-chicken takeaway/restaurant could “change the way” the Borough eats. 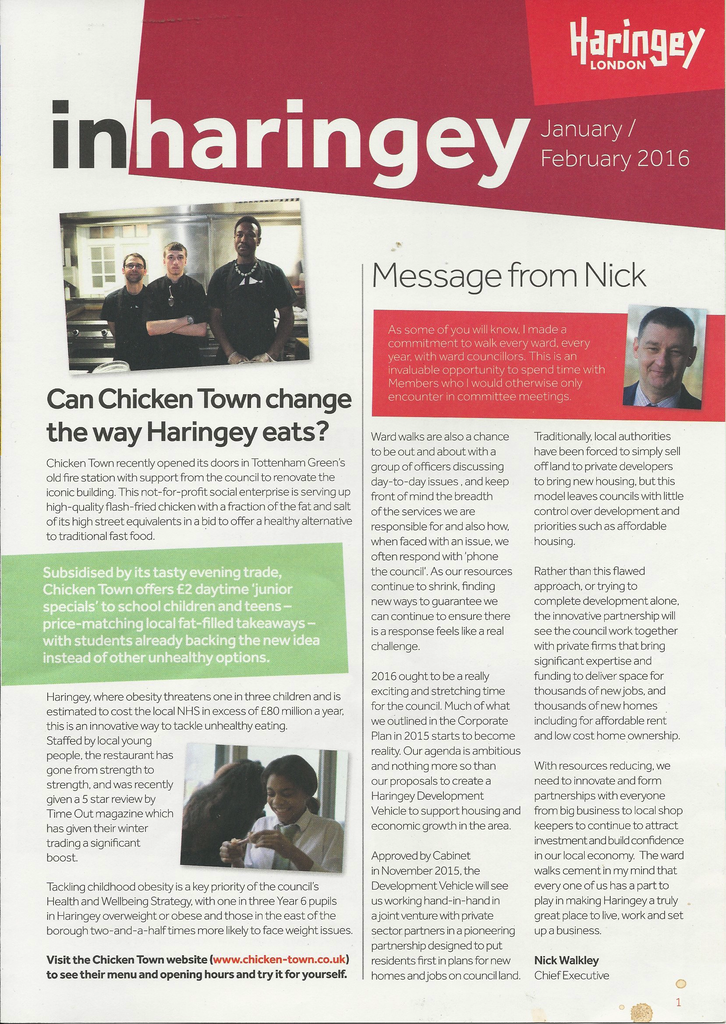