HERE is a complete and automatically up-dating list of Haringey Council's tweets about Hornsey Town Hall.

Over the past three years, the account of our Local Authority has tweeted of the need to secure the future of HTH and by extension, its sale.

At the time of writing, “secure” and its variants, appear eight times (e.g. securing the future).

And late last year, one of the local New-Labour Councillors described the benefits—of the Council's disposal decision—to Crouch End “and all of Haringey”, as being massive.

Thank you for the handy guide.

If the Council have "entered into a partnership with Haringey council" with the "multi-million pound restoration & community & arts facilities secured", why is it the councillors are currently reduced to asking questions about whether any of it will actually now turn up?

Could it be that the previous announcements were a bit premature (I nearly said 'fake news', but I stopped myself)?

Why have the councillors, particularly Cllr Strickland, tied themselves to this deal so closely, so publicly?

Perhaps the repeated tweets about this being an "exciting" development were actually referring to the thrilling leap into the dark the council decided to take?

Mark are you asking rhetorical questions?

None of them knew the details of the product which they were asked to sign-up to and flog door-to-door in Crouch End.  In other words they've been found-out in the middle of mis-selling. Three lots of toe-curling embarrassment? I've no idea if they're ashamed. Maybe not. But I never saw an apology. Did you?

Instead we got what seems to be faux indignation. Why weren't they told? Harumph!  They are writing very sternly with lots of questions to which they expect answers. True, they are questions they should have thought of and asked before.  Questions which their senior professional council staff and expensive consultants should have advised them to ask. Or maybe they did?  And Nat, Jase and Sar were each too busy posting selfies and smiling to pay attention?

As for Alan Strickland, who really has any idea of what goes on his head? I think you should assume that he does what the Dear Leader commands. (As do all of the Kobots.) Disobey and that's you and your special allowance down the lav. Plus an invitation to visit whoever is currently Ms Whiplash the Labour Chief Whip.
Remember also nominative determinism. His surname is a scrambled version of land tricks  So why be surprised when he brings forward messed-up skew-whiff development schemes?

Mark I think part of the problem is that the Council's publication arms are now much more used for PR purposes.

Rather than solely presenting facts or records—or information that is genuinely useful for residents—for some years now, we've seen the tax-payer funded promotion of New Labour Policies (with no overt reference to the Party in power).

It's one-sided and it applies to the Council's three main output channels (web, Twitter and People). This phenomenon enhances the chances—especially of the immature and less experienced—of ruling Councillors believing their own propaganda.

Now we have speculation and promotion (as a trivial example, we have "emerging" policy). And the repetition of typical, content-free public relations words and phrases.

The promotion of what is, in effect, the sale of our Town Hall, is a prime example of such unrelenting effort, including those premature statements that in retrospect, would have better been left unsaid.

There are occasions when the Municipal Twitter account is useful and I commend their acknowledgement, logging and forwarding reports of dumping. But they don't need to report or comment on soccer match results. 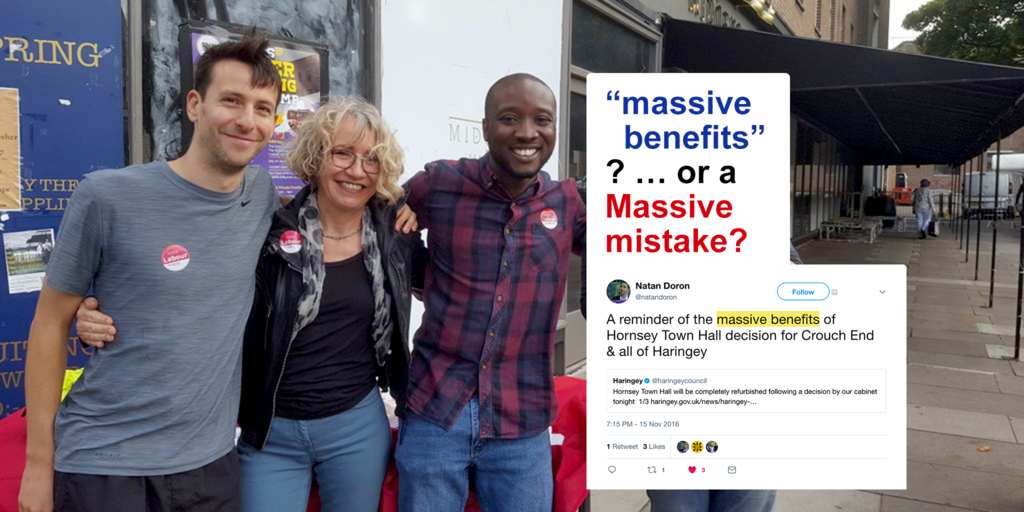