Another helping of Mayoral largesse announced today, £24m for regeneration projects in London under the banner Good Growth Fund. I quote - "the successful projects will deliver social and economic improvements including investment in community assets, workspaces, green infrastructure and cultural venues."

Mountview's Peckham project got a slice, and round here Finsbury Park and Wood Green were among the winners.

And well done to them, but I can't help but wonder why Haringey's objective for Hornsey Town Hall in Crouch End was to -

The press release Mark has linked to has the heading "Schemes to benefit all Londoners including BAME communities " , which is an interesting use of language. It would have caused a bell or a buzzer on 'Many a Slip' for what grammarians used to call tautology.  Obviously if the benefit is for all Londoners it will include the BAME and the lame and the game and the same and the fame communities. Perhaps what they actually meant was 'especially' the BAME, but maybe not allowed to say so for legal reasons. Perhaps Crouch End just isn't BAME enough. 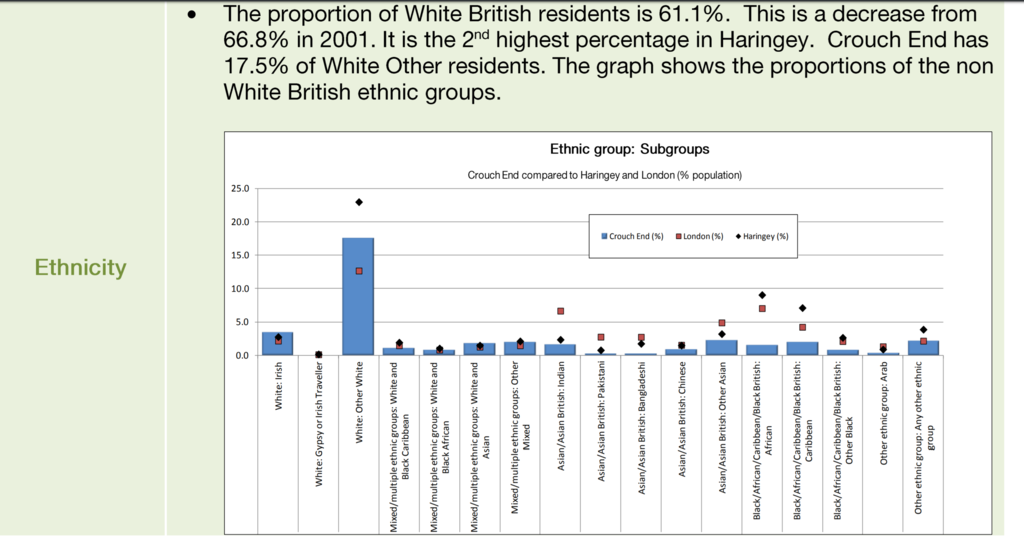 And  Mark refers to "Mayoral largesse" which actually is taxpayer largesse, Sadiq is only redistributing what he gets in. Which is fair enough, that's how taxation works. But if Crouch End never gets anything except cycle lanes (which is how it feels) then this particular goose will stop laying golden eggs, especially if all our local businesses are evicted. And Haringey knows that we're well off and not unemployed. I'm assuming level 4 and above is good.

Don't knock the TfL money, it's all we're ever going to get.

The defining mission of Haringey has been to extract as many golden eggs as it can from the detested Hornsey part of the borough, to centralise as much as they can in Wood Green, to focus all of its spend, its time, its energy into schemes in Tottenham and Wood Green. And always has been.

If there has been a slow recovery of Crouch End's local economy it is despite Haringey not because of it. We must be punished for Tottenham's poverty.

It is our misfortune. Haringey is a failed experiment (which is why they keep trying to relaunch it), a borough destined for one party rule and repeated failure. The needs of Tottenham and Wood Green can only be addressed on a London wide basis, the money extracted from the Crouch End and Muswell Hill will never be enough.

What we need is to tear it up and start again. Abolish the 1965 councils and turn London into 5 or 6 large boroughs, each with smaller local areas. Give Tottenham back to Tottenham, and Hornsey back to Hornsey, and we can all live in a borough called 'North London' or 'Middlesex'. The social needs of the Tottenhams and Edmontons can then be addressed with a larger pot, without having to slight us at every opportunity.

I have not forgotten that a (single) positive reference to Crouch End in the Wood Green Action Plan was removed because Haringey councillors thought it utterly abhorrent and demanded any mention of Crouch End should be immediately deleted.