There was an announcement a little while ago about the award of £5.8m for a Safer, Greener Crouch End. The announcement came at a time when our retiring Labour Councillors were trying to save their nominations. At that stage the money was the big thing and other details were a little lacking, indeed we were told that there were no details, that all that existed was a concept in order to gain the backing of the Transport for London (TfL) Liveable Neighbourhoods scheme, the intermediary re-routing this taxpayer money to Crouch End.

Now though, we have access to the bid document, which according to the properties in its header is dated 25th October 2017. It actually goes well beyond the conceptual, and is the basis for a bid to TfL. This document is embedded at the foot of this page, powered by issuu, and is also attached as a pdf. My guess is that the document was hastily written to meet a TfL submission deadline.

The TfL guidance relating to the Liveable Neighbourhoods scheme both encourages boroughs to undertake early engagement with communities in order to get buy-in, and not to undertake engagement too early or too widely for fear of raising expectations/generating opposition to emerging ideas. Given that the ambitious Mayoral strategy on which this initiative is based includes the aim "80% of all trips [made by the public in London to be] by public transport, foot or cycle by 2041" the public perception of the transformation clearly needs to be handled carefully.

I am, nevertheless, a little bit disappointed to discover what the money is to be spent on, only after the award has been announced. Which may be a little harsh, given that if anything else had been proposed the money would probably have gone elsewhere.

There are many references in the document to 'modal filters' - what I think this means is adding pavement and trees at the ends of roads so that cars can't get through, but pedestrians and cyclists can.

There are also many references to 'innovative' solutions - this seems to mean re-arranging perfectly familiar things a bit in order to change the way we use our roads.

Perhaps the most striking feature of the document is a proposal to change the road layout around the Clock Tower. 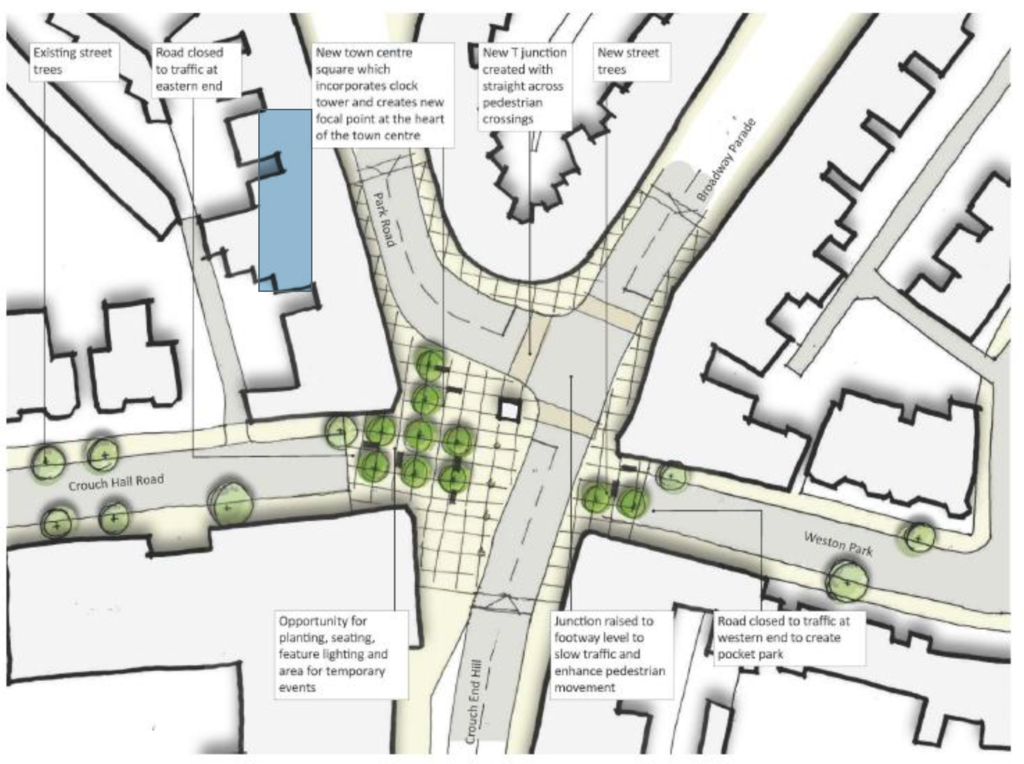 Here the current flow of traffic either side of the Clock Tower is replaced by a fairly old fashioned T-junction (and traffic lights?), with the raised roadway to eliminate kerbs. The cycle route is not evident. All the roadways are narrower which should make them easier to cross. There might be seating for those with the leisure time to watch the traffic stopping and starting , but neither entering into nor leaving Weston Park and Crouch Hall Road. Conveniently situated for sipping at your complimentary Waitrose beverage.

Now it might be that the Mayor's vision of a walking, cycling, bus-using, car-free population is exactly the right way to go, and this implementation of blocked off roads, increased parking restrictions, park benches and trees is exactly the right way to achieve it. But even within the document, in the rather amusingly titled section "Community Led Design", the authors admit that a marketing strategy is needed in order for us to understand just what a good idea all this is.

I was at the Archway the other day for a 9 a.m. appointment. Peak commuting time. I took this photo of the bike stands outside the station. Of the 12 bikes (and fragments thereof) 5 were clearly derelict and never to be used again. I have my doubts about some of the others. This is an idea which has not been totally sold to the community, yet. And is this the logical conclusion of the cycle sharing revolution We received 5,388 direct responses to our consultation, of which 59 per cent supported or strongly supported our proposals. 39 per cent did not support them, while two per cent said they neither supported nor opposed the proposals.