A lot of people have found the intensive use of Finsbury Park for music festivals to be inappropriate. The festivals create a lot of noise, the wall around the festival arena is large and oppressive , the grass suffers from the fall of so many feet, and parkrunners are unable to complete their Saturday morning jogs on the accustomed route.

A legal challenge to the use of the park for purposes other than free and quiet enjoyment by the public failed. Haringey is allowed by law to let the park for these festive purposes, but must only spend the proceeds within the park itself.

I have no first hand knowledge as to whether the organisers have failed to uphold these objectives, but it wouldn't surprise me if they had. If you do have first hand knowledge , one way or the other, then you can make representations to the address show in the photograph. 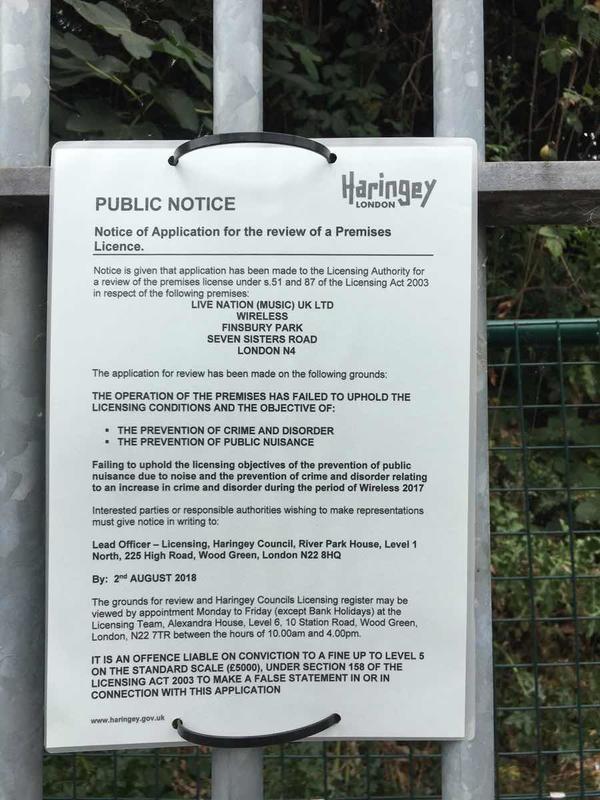 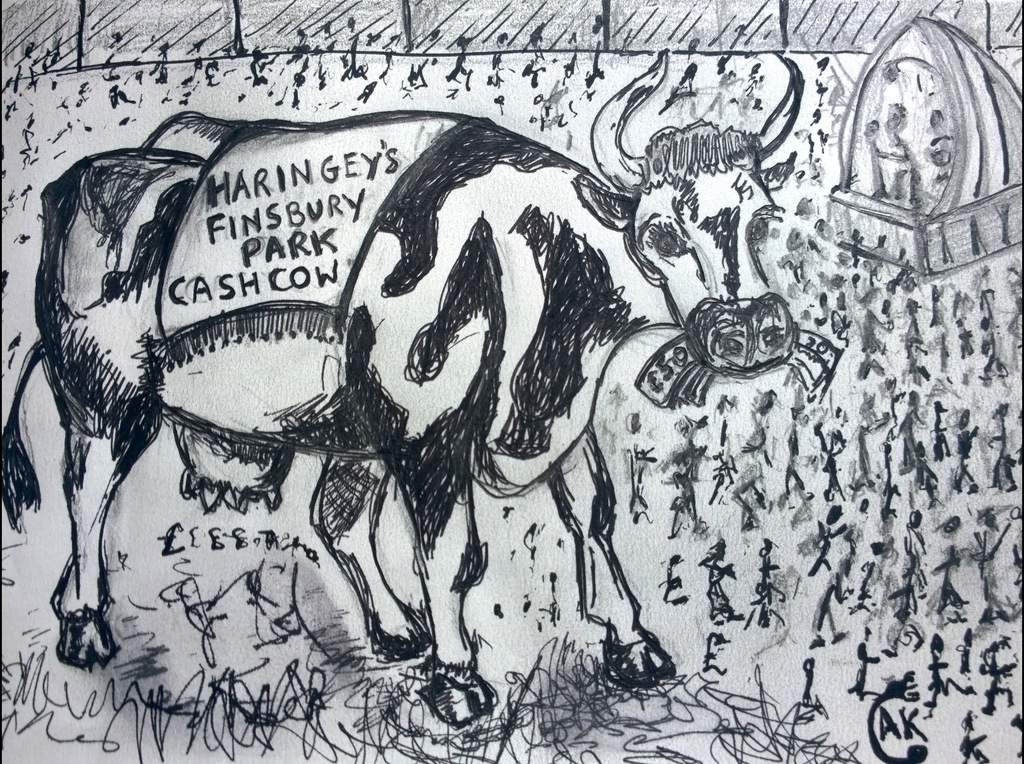 I UNDERSTAND that the "music" concerts can be held in Crouch End and at least person from Crouch End suggested they enjoyed being able to hear it. The trouble is, people over a big area in north London can hear these Haringey Council-licenced Major Events, whether they want to or not.

Apart from those who pay money to attend these Events, even fans of “Grime” may not wish to listen to it continuously. Why should a minority music-taste be imposed on the majority?

Nearly a fortnight ago, I heard them up at Ally Pally allotments and there are also reports of it being heard in North Road, Highgate. At a radius of say, two miles, this suggests that the total footprint is roughly 10 to 15 square miles.

Because Finsbury Park is located at the prominent southernmost point of Haringey, the sound footprint easily goes into two other Boroughs, Hackney and Islington. Residents of those Boroughs have less say in Haringey's selfish conduct. From a noise-angle, the worst affected are the poor residents in Seven Sisters Road, Hackney. Pity them: especially any shift workers. I met an A&E nurse who was fizzing with anger about the noise. The noise is the most obvious difficulty Haringey's policy of Major Events:

► Equally important are the denial of most of the best of the park for weeks on end, at the height of summer. The Build alone takes more than a week and the tear-down is currently ongoing.

► The damage to the park is more than ever this year, with heavy machinery driving over the park, roughly a quarter-million pairs of feet trampling the ground over six days, tree branches broken in the erection of hundreds of metres of steel wall, graffiti and other wear and tear. The hirer is supposed to pay for repairs but our park is never fully restored and year-on-year, it gradually deteriorates.

► The disruption and dislocation of traffic, parking and transport is another problem. Seven Sisters Road is even closed and a bus route diverted. The pressure on Finsbury Park railway station (strictly speaking in Islington) is immense.

► The policing costs are so far unknown. It doesn't really matter who pays for Police time: it is the waste of their time, forced by the current selfish council policy that is the issue. At a time of Police cuts and scarce resources, they really have better things to do with it. Once the "music" noise stops, a police helicopter hovers overhead, noisy, for half an hour or so.

The council treats a public park as a cash cow because they are not willing to deal with a few sacred cows in their own backyard.

"music" concerts can be held in Crouch End

"music" concerts can be heard in Crouch End

Sorry to cause any alarm: I have no reason to believe that the Wireless juggernaut is coming to the Town Hall green or anywhere else in Crouch End. Except for their noise.