Is it possible to drive legally, at 20 mph, in Haringey?

In my experience the new 20 mph speed limit is being almost universally ignored.

"Almost", because I, for one, am trying to abide by it. I consider myself a law abiding driver (and cyclist, by the way, so I am pretty keen on lower speed limits for drivers).

But I am finding it very difficult simply because I find that driving at 20 mph results very quickly in unreasonable pressure by other drivers who clearly find the whole thing a bit of a joke.

In fact I would go as far as to call it intimidation: hooting, flashing lights, overtaking dangerously, obscene gestures, the lot.  In all my years driving I have never encountered this conundrum before.

What to do?  the Police don't seem interested. In fact they are on record as saying they are not interested, which I find amazing.  How can they be allowed to cherry pick what to enforce?

I worry that this is going to make roads more dangerous, not safer.  True, the 30 mph speed limit was not really enforced either but at least most people seemed to accept it.  I think that, for a while, most people just still want to stick to that more out of habit that any fear of enforcement.  I also think that, soon, more drivers will start to think "well if I can ignore 20 mph, then I might as well drive as fast as I like".

Aside from the ethics of all this, what is the legal position?  If I drive at a speed to suit other drivers' wishes then I am driving illegally, with a possibility of prosecution and I don't like that prospect.

The whole thing is a mess.

I don't think the police are not interested. This question was asked at an online Q&A session with the Borough Commander on 18th March:

Q -  "Almost all drivers seem to ignore the new 20mph limit. Is wholesale law breaking tolerated in other areas of policing?"

A -  "No and we are running a number of speed reduction campaigns around the borough working with our colleagues from Tfl."

Q -  "Thank you. Please start outside our schools - people still blasting past on Bounds Gn Rd at well over 30mph."

A -  "It is the beginning of a series of police operations to reduce speeding on the borough."

I think the problem is lack of resources rather than lack of interest. You could ask the police the same question again on 8th April at 12.30 when they hold the next online Q&A: follow @MPSHaringey on Twitter.

I was hit by a vehicle while on a zebra crossing. Thankfully, the driver who hit me was travelling at 20 mph so while I suffered numerous broken bones and spent weeks in hospital recovering, I survived and made a full recovery. According to my doctors, had the driver been travelling at a higher speed I most likely would have been dead.

One of my fleet of Hondas is a motor bike (the remainder of the fleet is a clapped out Jazz with four slow punctures) and I have been struggling to find a combination of gear and throttle setting which keeps me at 20mph. 2nd at about 1800 revs keeps me to about 23mph, which, from the legal/safety point of view is a big improvement over the 33mph I would have been doing in 30mph zone. Driving everywhere in 2nd gear is a long way from ideal. I wonder what effect it has on emissions from enormous diesel powered buses? We might survive a collision, but the particulates will get us.

And the other drivers' rage is not a reason to exceed the limit - smile fondly at them and raise a hand in acknowledgement - they will hate it and become even more enraged. Better yet, get a two wheeled vehicle and smile and wave as you overtake the impatient so and sos at the next lights.

I am already a cyclist (average 65 miles a week) and I know what it is like to have vans careering past me at 40 ish on Green Lanes in Stoke Newington (another 20 mph zone).  I have given up cycling north up Ferme Park Road hill: it is the single most scary stretch in my commute to Canary Wharf from Crouch End believe it or not.  The 20 mph limit has had no impact there.

Completely agree that reduced speeds = lower death and injury rates.  But that isn't the point I am making.

I find it hard to ignore drivers on my bumper, flashing their lights, itching to get past.

Cranley Gardens and Woodside Avenue are particularly bad (my kids' school run).  Also Priory Road which is, for some reason, still 30 mph.

The police are on record as saying that they had no intention of enforcing the limit.  I think that is a political position they are taking that is not acceptable. 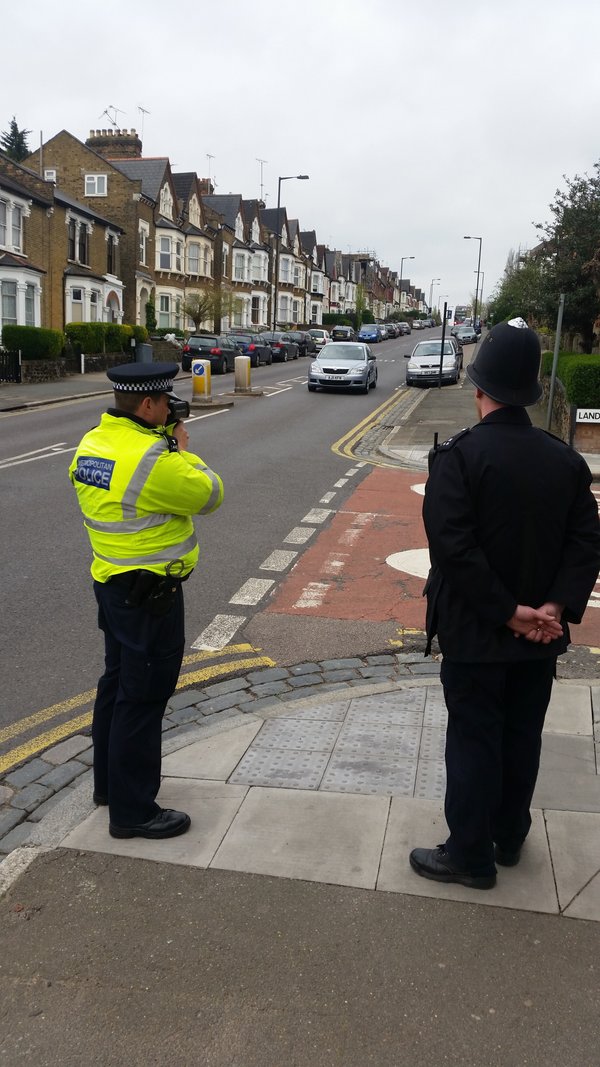 For those doubting the Police intent to enforce the 20mph limit, here's a pic of them in action with a speed gun in Ferme Park Rd today.

20 mph speed limits are enforced by drivers sticking to what the signage states.

As more people drive at 20 mph it has an impact on those who try to speed, they too have to slow down.  It's a change in driving style which some will take a bit longer to learn.

Too many folk have got used to driving just over 30 mph in quiet residential roads so any reduction in speed is positive for a host of reasons.  There are many reports proving that less damage is done when someone is hit at lower speeds. But it's not just about being hit, it's also about more thinking and reaction time to jump. move out of the way or do something different.

Nope.  I don't agree.  It should not be up to a small minority to try to enforce this.  It should be up to the authorities.  The point is that I feel uncomfortable and occasionally intimidated driving round here at 20mph and I do not believe it should be so.