I published an analysis of what I thought of the FEC offering since they won the preferred bidder status under OJEU.

Now that the planning application is inan update is possible.

FEC have been granted an exemption from the need to carry out an Environmental Impact Assessment (EIA). The link I've given sets out in paragraph 4 just what this would have meant. Given that they are building a series of tower blocks, recent events at Grenfell Tower make sub paragraph 4 particularly poignant. And riddle me this - is it right that the judgement over whether an EIA is needed should be carried out by the local authority which has cut a deal with the developer?

FEC will provide no affordable housing at all. None whatsoever. This is set out in the Viability Assessment, where the word 'affordable' appears 35 times. On occurrences 34 and 35 it says none will be provided. Some of the occurrences have been redacted.

And the apart hotel is back. Each unit in the submitted diagrams has facilities making it self contained. Now riddle me this - what's the difference between a self contained unit with a communal entrance plus a lockable door and a flat? My view is that the apart hotel takes the size of the development over the 200 unit limit at which the mayor gets involved.

I'm still not totally happy about progress so far. 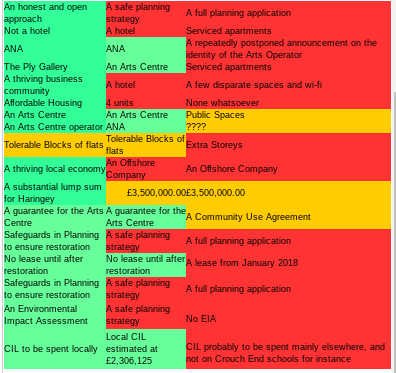 I believe the answer to your riddle is that I recall FEC saying that stays in the apart hotel will be limited to 90 days max.

So, you have come up with an assessment of what you believe Crouch End doesn't like about the proposal (virtually everything). My challenge to you is to come up with a preferred alternative that would turn everything green on your list, and show how such an alternative would be financially viable. How many affordable houses are required to turn your column 3 green? What is missing from the arts centre proposal in order to turn it green? How much bigger does the lump sum need to be to turn it green? How do you expect someone to commit to a restoration programme without a lease?

Meanwhile every day that passes another bit of plaster falls off, another crack appears, another window is broken, another leak develops, another bit of original decor disappears etc. If we wait for the perfect bid and perfect bidder we will end up with no town hall left to restore.

My preferred opotion for the Town Hall has always been to take a piecemeal approach. And now ANA have run the place for two years, I believe even more that it could work. Whatever excess is being generated at present of income over expenditure, take that and put it towards a prioritised program of works. It might mean clsoing down part of the operation for a time, but always leaving the building part open.

Add in the dowry from the car park build, which could be managed by a housing association, and you can have not only affordable , but social housing.

Add in subsidies, available because the building is in public ownership, and the restoration works can accelerate.

And, no, that is not the answer to the riddle, it is merely an assertion by FEC, like the assertion that there would be no planning application.

And as for the granting of the lease - Haringey took FEC's word for what was in the bid, without a contract, such as a four star hotel, now removed. FEC can take a letter of intent to grant a lease, when the restoration is complete, but not before. I hope the planning permission will be conditioned accordingly.

Missing from the Arts Centre is 1) a plan and 2) an operator - FEC has so far come up with neither.

I've not seen ANA's balance sheet, but I doubt whether they are generating sufficient revenue to cover the annual maintenance costs, let alone providing a surplus to pay for renovation. Even if you assume a lengthy ten-year refurbishment programme, that's going to require ANA to generate a surplus of c£3m per annum. Pure fantasy.

Whatever the scheme, public, private, community, or a blend of any - the funds for a restoration and refurbishment would be sourced from the enabling development. And there's enough, even if you're building a 67 room hotel and London's most expensive village hall.

Perhaps a project overseen by Haringey would've afforded a greater sum of affordable, but I doubt it'd be many, and in any case they were very keen to avoid a home-spun project seeing themselves as no longer possessing the capacity or the resources to deliver. Hence the whole procurement and seeking "innovation from the private sector". FWIW I agree - I don't think Haringey are up to it either.

Add together a developer seeking a 20% return (they all would) and a procurement (plus an earlier consent) which gave primacy to the restoration, then you get versions of what we have now.

It is worth recalling the other bidders - from memory one did have a housing association as partner, but they couldn't make the sums add up, another saw similar difficulties and went for an increase in density and was marked down (of course they could have followed FEC's route and made promises to land the contract, only afterward to revise the offer and go for the increased density anyhow).

There was a bid much closer to Adrian's low impact model which included the Mill Co Project (currently running the Green Rooms in Wood Green), but their numbers were deemed too low - a pity, but then they were not planning a multi million hotel.

Meanwhile there's a plan on the table, the only table in town as it were. A restoration plan at least which looks convincing on paper... my doubts (and I have a few) centre on the same issue as Rob identifies re. ANA. After all, whoever becomes the operator will be faced with the same task - they'll have to generate a significant return to make the thing viable, and right now we know nothing.

It's an odd way of creating an arts centre and a cultural hub to say "something'll turn up". Fingers crossed, eh?

Permalink Reply by Adrian Essex on August 3, 2017 at 3:11
To reiterate what Mark says "I don't think Haringey are up to it either."

Permalink Reply by Adrian Essex on August 3, 2017 at 3:08
I have to disagree with Rob again. £29m is an assertion by the joint publicity machines of LBH FEC and it is this number that is the fantasy. The true cost of the repairs is in the order of £6m. The rest is frippery, world class renaissance, and most galling of all, roughly £17m to build a hotel.

Yes, £6m to get the building off the At Risk Register (stabilise it, make it weather tight and generally more in keeping with the Grade 2* status it enjoys. Perhaps another £6m to kit it out for its new function - arts/business center would be nice.

But, no,the £17m "investment" is not in any sense an investment in the future of HTH - it is a straight forward business investment that looks for a return.

If the current (ANA) model of letting out spaces for businesses (but at more realistic rents) were to be continued in updated premises, a significant surplus could be generated to subsidize the arts/community activities. Further help could be found by leasing the building to an arts trust (as envisaged in 2010) thus giving access to national arts.

If the Economic Viability Assessment document in the planning application were not so heavily redacted, it might be possible to get a clearer of how FEC envisage the sums will actually work. 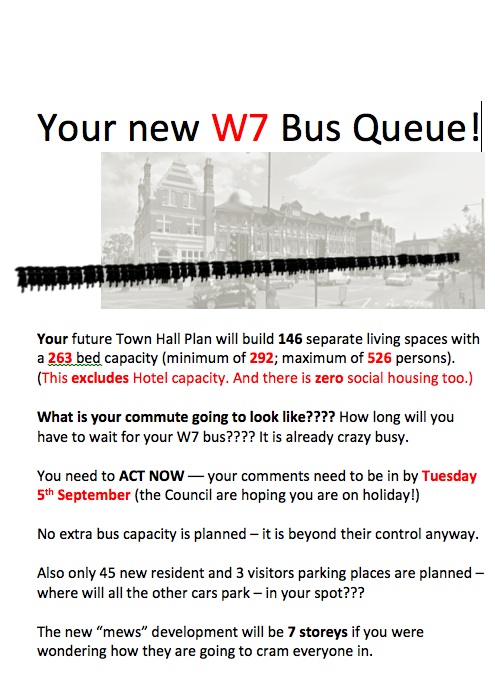