The space appraisal and architect’s options have now appeared online at a dedicated Highgate Library and Jacksons Lane website.

Option 4, the large library option, is pasted below (“the option study should be viewed as a series of first sketches to generate discussion”) which would suit the library but seems a very poor outcome for JL. Perhaps they'll go for option 3.

The timeline now appears to be – 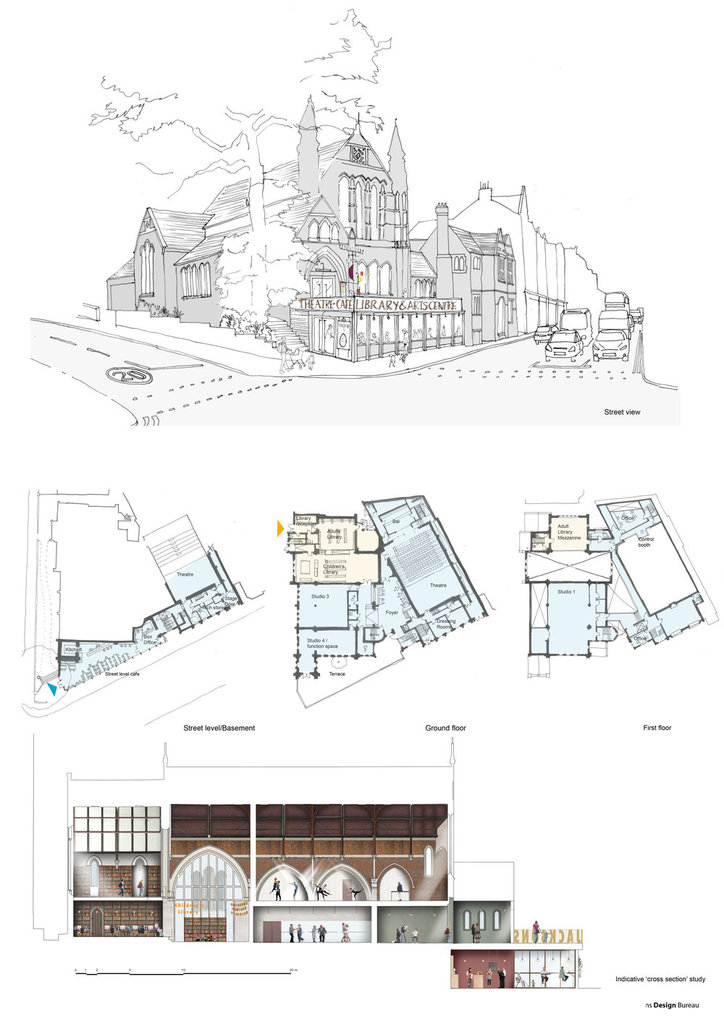 It should be noted that the Highgate library building is included in Haringey's schedule of Locally Listed Buildings. This means, according to the council,  'Additional conservation considerations are given to the alteration of these buildings and the council will seek to ensure that the special character of such buildings is protected and enhanced.'

So moving the library across the road does not mean that the building can then be pulled down.

There is a press release headed "BRIGHT FUTURE FOR JACKSONS LANE" which seems chillingly familiar.

The plan to relocate Highgate Library to Jackson's Lane is not feasible even by Haringey standards.

The reason given is

"Proposals to consider relocating Highgate Library into a renovated Jacksons Lane will not now be taken forward. A feasibility study that explored a number of co-location options, showed that the estimated receipt from selling the existing library site would not be enough to cover the costs of creating the new library and that Jacksons Lane may lose revenue as a result of space lost to accommodating the library."

I think they must have found a very expensive builder, for that quote.

"“We always welcome innovative suggestions for making the most of Haringey’s fantastic assets . . . . " provided only that the innovation is to sell them off.

Amazing it's possible to prepare a Feasibility Study for an Arts Centre. Who knew?

Hornsey Town Hall has been out for tender, sold, is going through planning, and Haringey haven't even asked for one yet.

THAT glass box—a feature of all the options—would have clashed with the style of the converted church. It would also have put a cafe right by one of London's most polluted and congested box junctions.

I don't think any of the options were suitable for the library, for a host of reasons. Or the arts centre. The whole idea was misconceived from the start.

Apart from the Library losing its beautiful home—and becoming a part, or even just a bit-part of a larger entity—the project would have crippled Jacksons Lanes’ finances. Broadly speaking, it would have had to sacrifice approximately a third of its area to a library. Floor space generates income and one can read across from this, that JL would have lost roughly a third of its income.

Why this wasn't thought through before thousands of pounds of taxpayers money were spent on a feasibility study, I don't know. It reflects on wisdom, judgement and leadership.

I suspect the motive was for the Council to get their hands on the valuable site, a stunt they've been trying to pull for 30 years. In June 20, the Council Cabinet got on the books an "in principle" key decision to dispose of the Highgate Library site. I hope this will now be rescinded.