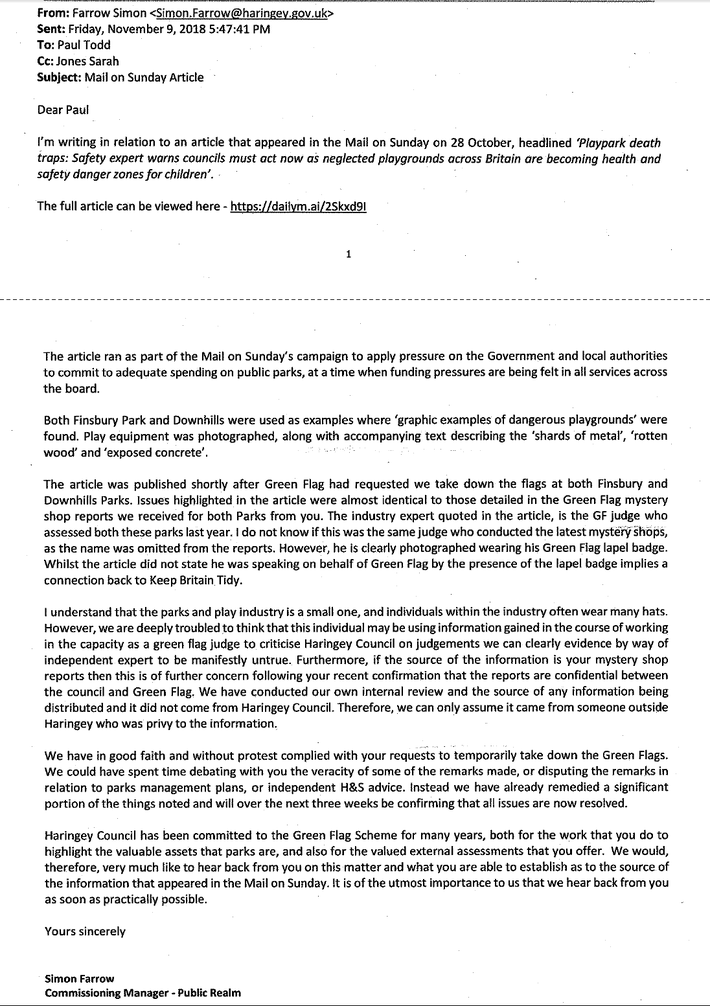 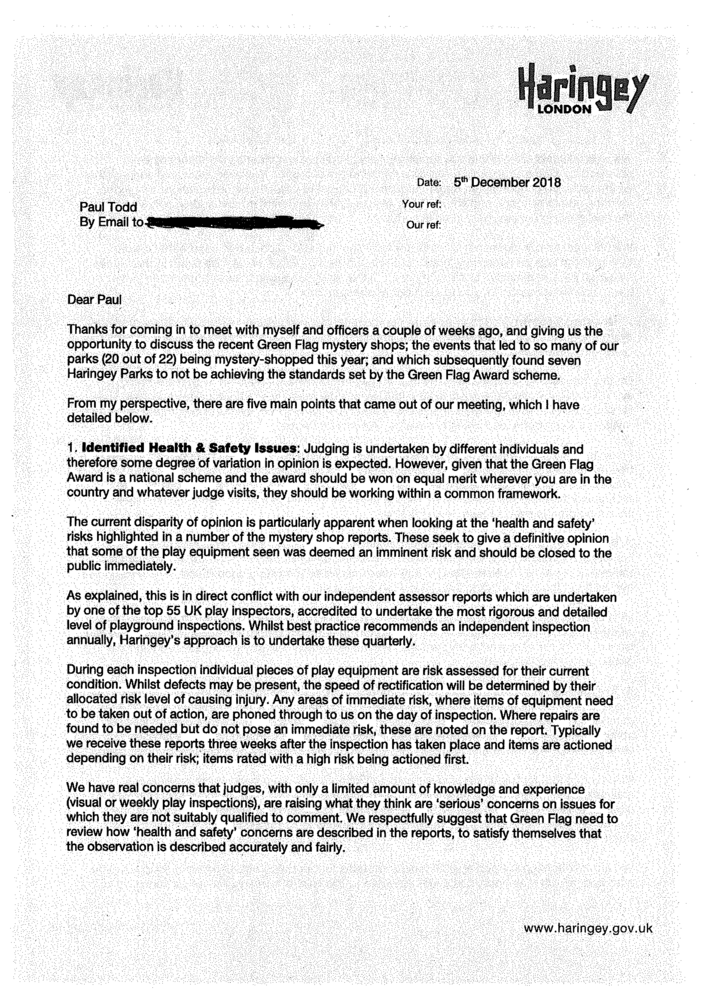 THE Joseph Ejiofor-led council is sometimes shameless. However, the protests about the judgements of the Green Flag inspections are surely now going beyond mere shamelessness and are becoming cringeworthy:

Finsbury Park (and Downhills) both received Red Grades and Keep Britain Tidy asked for their flags to be lowered.

(we know know at least one Haringey-controlled park has been red-graded
before, but no one knew as presumably, flags were not asked to be lowered)

After quickly doing some remedial work, Haringey raised the flags again. Without a KBT re-inspection and without the prior agreement of KBT.

A subsequent inspection by KBT on 21 December is on the link above. Another Red Grade with comments that in context, can only be described as excoriating. Never a Local Authority to take it on the chin, and say "we've learnt lessons" or "its a fair cop guvner", our Council is livid (link above).

As part of its PR offensive, an arm of Local Government sees fit to display on it's website;

HAS there been—before this—such a strong criticism by Keep Britain Tidy, of a Local Authority?

This screenshot below with yellow highlighting is the end of the Green Flag Report following the "Mystery Shopper" re-inspection of Finsbury Park, by a KBT judge on 21 December 2018.

The second inspection followed the desultory work at rectification performed by the council after KBT awarded council-controlled Finsbury Park a fail (Red) grade, on 3 October 2018.

There is no such thing as "Special Measures" for parks but if there were, would not 9 (nine) of our parks be in them? 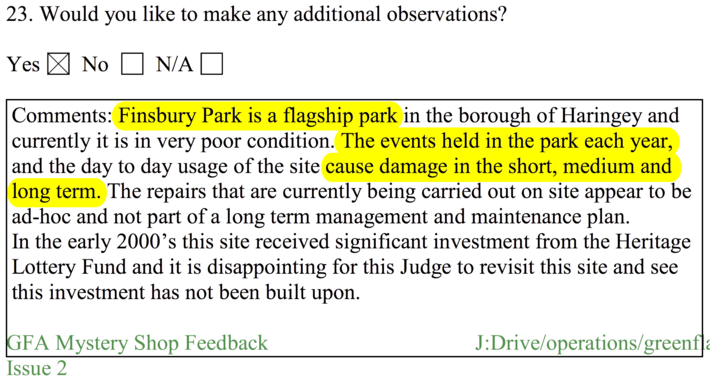 At yesterday's meeting of the Haringey Parks Forum, I asked the council officer who wrote the topmost letter (above) if he had any regrets about raising the flag in Finsbury Park, so quickly after the Park received the bottom (Red) grading and after having effected some repairs.

That was done without agreement, let alone the prior agreement of Keep Britain Tidy who run the independent inspection surveys.

The answer was, no, he had no regrets at all.

After the un-agreed flag raising, KBT mounted a further inspection in December. Following the council's desultory remedial work, KBT repeated the Red Grading and made further criticisms of the state of the park.

Trying to understand the council's position better, I asked if he was saying that the goal posts had moved.

The council officer denied that and claimed that the second inspection was undertaken by a different judge (from the first inspection) and who raised different issues.

It's Haringey Council's equivalent of the Dead Parrot Sketch.

Council Officer: "Sorry squire, I've had a look 'round the back of the park and uh, we're right out of red flags".

Customer: "I'm trying to understand the council's position better. Are you saying that the goal posts have moved?"

Council officer: "The second inspection was undertaken by a different judge (from the first inspection) and who raised different issues. Let me introduce you to my cousin in Bolton."
(Puts on a false mustache.)

The Council's position on parks is incomprehensible.

They feel aggrieved that they've had a lot of inspections. They seem to think they've been singled out for special attention, whereas it could be that they've had insufficient attention in the past from KBT and this has been rectified.

What we've learnt, is that in the past, there's been at least one red grading but (presumably) unaccompanied by a request to lower the flag. This time, KBT asked that two parks' flags were lowered, making a high profile statement of lowered standard.

Such public visible, external criticism is almost more than the council can bear.

In my view, the criticisms of park maintenance the council has not taken seriously enough. The premature raising of the flag is evidence of that.

At a Full Council meeting, Leader of the Council made a public mockery of his own Manifesto Pledge to retain 25 Green Flag Awards status parks. KBT ought to take a tougher line with the Ejiofor-led Administration, including suspending failing parks from the scheme and inviting the council to reapply.

Nothing that Keep Britain Tidy does or says will affect the failing Joe Ejiofor regime. Nor should KBT seek to take a "tough line". They are a neutral independent organisation which tries to act as a "critical friend" in the interest of maintaining standards in public parks.
But plainly we have and will always have the most perfect parks. Someone doesn't believe this story? Hire a different story teller. Or hire a different photographer to take better angles. Frame the shots to exclude the damaged play equipment and benches.
Better still, simply use your imagination. Close your eyes. Do you believe? Oh, please, please believe! If you believe, wherever you are, clap your hands and the parks will deserve the greenest of green flags. It's unfair if you don't believe. Clap your hands as hard as you can and save the parks with your belief in magic.

It's really not difficult. Remember how people once believed that Haringey's streets "were among the cleanest in London."
https://www.flickr.com/photos/alanstanton/17170507342/

Alan, I said "tougher" line rather than "tough" !

The evidence that KBT may have been soft previously, is that we now know that, in the past, there's been at least one red grading in at least one park, but the public did not know because KBT did not ask Haringey to lower the flag.

And(therefore) no one asked to see the KBT reports, as far as I know. I can't recall a leader of the council being asked in a Full Council meeting, why he had not published them, as Cllr Ejiofor was asked (and he seized the opportunity to make a fool of himself).

By tougher line, I mean that—since KBT and the public now know well the delinquent conduct of the council, their insolence and the arguing—KBT might now consider requiring the following in the event of any further Haringey Park Red Grading:

To me, that would not be a tough line, but a line that is consistent with maintaining the integrity of the Green Flag Scheme. Up until a few months ago, the scheme was in danger of falling into disrepute, with Haringey seeming to be more interested in collecting flags than in maintaining standards.

A tough line would be, on a further red grading, to cancel a parks membership of the scheme. That may become necessary.

It may be tough to take a tough line, as the council may be paying money to KBT for Membership of the Green Flag Scheme. Which if true, would make them less independent than first thought.

If KBT have a billing relationship with the council, they may tend to feel like a supplier of services whereas Haringey may tend to think they are purchasing the flags.

THE attached PDF file appears to be a genuine publication by Local Government (Haringey) and not a spoof. 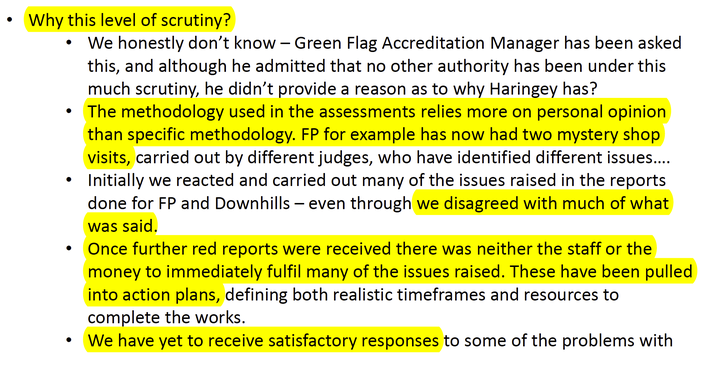 What makes this document remarkable is its tone and defensiveness. It follows the multiple Red-gradings—by Keep Britain Tidy judges—of Haringey parks and their request of the council in about November of last year to lower two of their Green Flags.

This is the municipal equivalent of an offender—having heard a Judge pronounce sentence—going on to hurl abuse at the Judge, the prosecution, their defence team and the judicial system for 20 minutes. In this case, for 20 pages. As may be seen from the screenshot at the foot, in this case the judge was dealing with a repeat offender. The level of deceit may be judged by the above screenshot. While it is true that "Reports have been shared with Ward Members and Friends of the parks", what this omits is that the sharing took place only after many weeks of earnest representations by Councillors, Friends Groups and Individuals.

Haringey rarely reacts well to expert external criticism and the Green Flags fiasco is one of the best examples. Is the council a fit and proper steward of our parks? 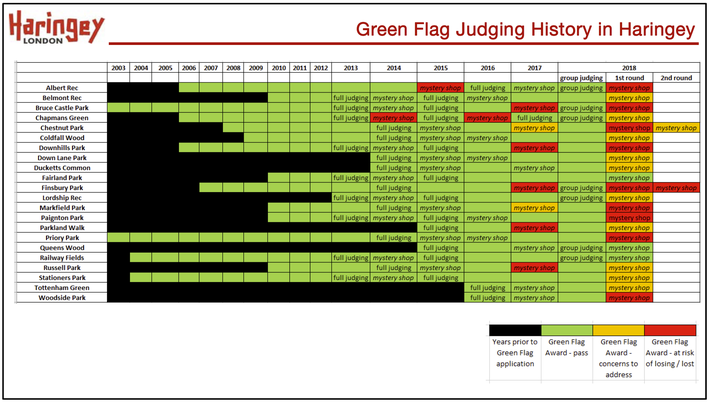