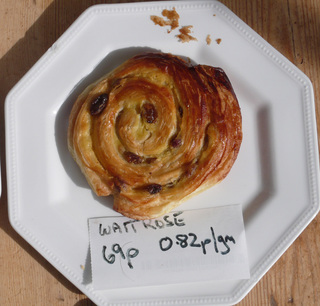 Having taken part this morning in the Finsbury Parkrun (admittedly my worst performance to date) I felt entitled to a pastry (actually I attribute my poor performance to pastries, like a top performing horse I'm currently carrying 14lbs overweight). Somehow this prompted me to set out on a totally selfless quest to determine the best pain aux raisins in Crouch End. I bought a sample from each of Coffee Cake, Gail's, Belgique and Waitrose. I would have bought one from Sable d'Or but they had none today.

The testing team consisted of myself , my wife and our middle daughter. They don't always volunteer for things but for this no press ganging was needed.

Appearance - There is a clear winner - Coffee Cake's is not only the biggest, but its cooked to the right colour and dusted with sugar

Taste - we surprised ourselves by rating Waitrose the best, surprising because it looks the least attractive and we suspect mass production (Coffee Cake bake daily on the premises, Gail's bake daily in Notting Hill, Belgique bake daily in Wanstead, I forgot to ask Waitrose). Gail's was easily the worst being bready and boring. Coffee Cake and Belgique came about even, Coffee Cake having a definite edge in sugary spiciness, with the custard soaked Belgique perhaps a bit sickly. 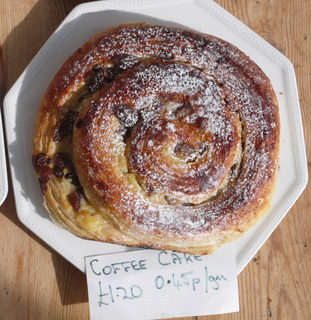 Value for money - absolutely no doubt about it - Coffee Cake barely more than half the price of its nearest competitor, with Gail's way behind.

Size - Easily my most important criterion, if you're going to stuff your face then make a good job of it! Coffee Cake wins by a street (though you do have to ask for the one you want - hand made does bring about some variations) with Waitrose really quite teeny weeny

Conclusion - I'll be going to Coffee Cake for my raisin danish. 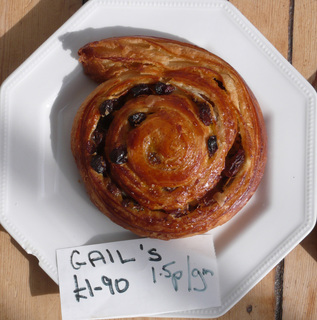 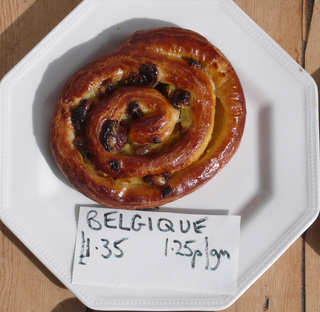 Have you read what Gail's said about opening a shop in Crouch End?

"GAIL’s fits into its local environment, adapting to give the customers in each area what they really want or need: a bread shop in an area that is missing out on great bread [...]"

They have clearly done a LOT of research into the local area before coming to that conclusion.