Haringey recently consulted for extensions to Controlled Parking in both  the Crouch End A and B zones. The consultation closed on Oct 8th. On November 16th the LBH's Cabinet will consider increases to parking charges as per the table below. 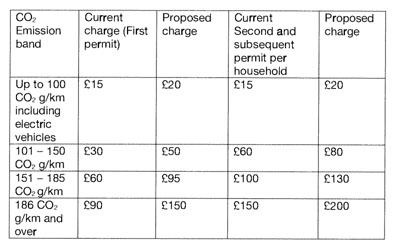 These are pretty steep increases for a council which had a surplus on its parking income overall of £3.096m last year, on a total income of £12.097m. Parking apparently costs £9.001m to enforce.
Lickily in the face of enforced cuts LBH has the motorist, especially the motorist who lives in a CPZ, to fall back on.

Permalink Reply by Ivan O'Pinion on November 17, 2010 at 7:30
Councillors did last night (16/11/10) approve the proposed increases for CPZ charges. Luckily these are only small increases. Say, £35 for the 151- 185 g/km of co2 band or 58% - well in line with inflation. Pity the poor quack who will face a 500% increase. Still, I do think its fair to introduce these charges now, 1 month after the Crouch End CPZ consultation. The document did point out that charges would not remain the same forever.
GreenN8 has done a lot of work on CPZs and charges, pointing out that Richmond has scrapped its CO2 based charges because they don't work.

Permalink Reply by Anony Pony on November 20, 2010 at 0:12
Streetcar throws in the towel as whispers about Haringey cabinet intent to charge them for parking their cars come true!

Streetcar has decided to take their money and run, when news of Haringey decision to charge them for parking their cars where confirmed. Streetcar bosses confessed “dealing with Anti-competition watchdog was easier then dealing with Haringey transport bosses.”

According to the Telegraph Streetcar founders are to net £11m from the sale, don’t you feel sorry for them? But hey we can take comfort knowing that our council tax has been subsidising their business for a few years.

On the up side we can all sleep well from now on, knowing that our CPZ permits have been officially doubled and will help raising the annual parking surplus from £3,000,000 to unknown new heights.

Hope this news made you smile. Read the ‘real news’ on Haringey decision and the latest press on GreenN8 website http://www.GreenN8.org

Two university friends will net in the region of £11m after the UK’s largest car sharing group Streetcar was sold to US rival Zipcar.

Zipcar, the largest car hire group in the world with 360,000 members, will pay around $50m (£32.5m) in company stock to acquire Streetcar, of which Andrew Valentine and Brett Akker still own a third.

Mr Valentine and Mr Akker founded Streetcar in 2004 and have established a fleet of 1,400 cars across eight British cities, including London.

They met at university before taking on senior roles at P&O, the ferry group, and Mars, the confectioner, respectively.