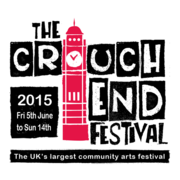 Space36 is an inhabited house and occasional art space in Ashley Road (off Crouch Hill).

This is the second year that the residents of Space36 have hosted a group of artists and invited them to develop artworks over a four month period, and fill a substantial portion of the house and garden with the results. This year seven artists originating from EU countries, who have made their home in the UK, have been invited to explore how their idea of home and belonging has been affected by Brexit.

The focus of the exhibition is on the personal rather than the political. Starting with their gut reaction to Brexit the artists explore different psychological aspects of Brexit and the feeling of dislocation and being unhomed.  They take apart some of the unconscious associations that we have with the idea of “home”, such as security, comfort and conviviality, to create psychological unease and make the audience look afresh at familiar objects, relationships and spaces.

Space36 is an experiment in opening up a private domestic space to artists and visitors for thinking and art making in a collaborative and convivial setting to see what sort of art and what sort of conversations emerge.  During opening hours of the exhibition, Space36 will run a pop-up Garden Cafe with delicious homemade tea and cakes to provide refreshments and a relaxed convivial atmosphere in which to view and discuss the art.