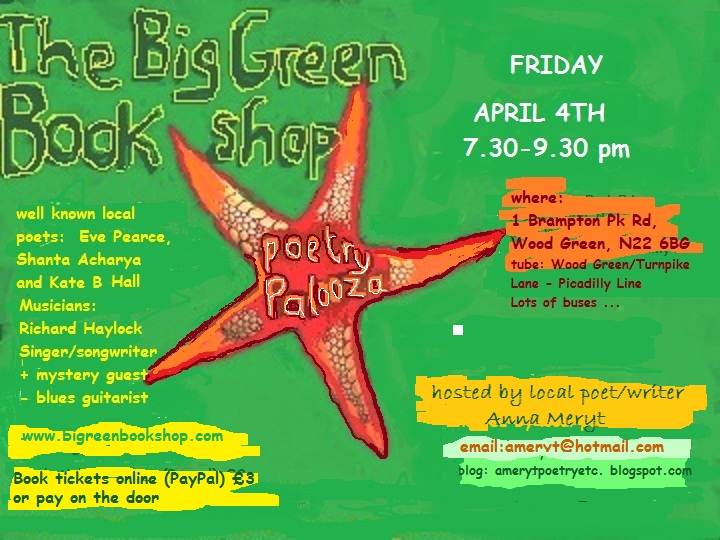 An evening of fun and entertainment with an amazing line-up of experienced performance poets, a blues guitarist virtuoso and a local singer/songwriter.

Shanta Acharya, is the founder director of Poetry
in the House, Lauderdale House in London, where she has been hosting monthly poetry readings since 1996. She was elected to the Board of Trustees of the Poetry Society, UK, in 2011. She has been published many times.

Eve Pearce Her career now spans six decades, including many roles with the RSC and in the West End. Eve is a
published poet, often writing on her Scottish childhood ...

Kate B Hall an experience poet/performer has been
extensively published in many poetry publications.  She is soon publishing her first poetry collection.

Greg Mayston has been a Blues guitarist/singer for many years and has an encyclopedic knowledge of the History of the Blues. He plays  authentic 1920s, 1930s and contemporary sounds - new songs and old.

Richard Haylock, local singer /songwriter who says he's 'half cinematic heartbreak, half rockin ass-shake'.... OK?  He has released one EP and is working on another two as well as playing drums for London's Dutch Barn.

The event is hosted by Anna Meryt a dynamic and experienced local poetry performer many times published and bringing out her second poetry collection this week.

RSVP for Poetry and Music Palooza to add comments!