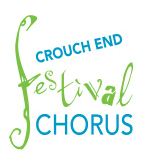 One of the country’s leading symphonic choirs is launching a 12-hour sponsored singing marathon to raise funds for a major recording project.

On November 28th Crouch End Festival Chorus will become the 12-Hour Choir, singing a selection of the greatest choral works in North London.

Music director David Temple will be wielding the baton throughout the 12 hours, which will be punctuated by brief solo and chamber music sessions by CEFC members.

The event is part of a campaign to raise some £30,000 towards the cost of an exciting new recording of Bach’s St John Passion. This will be the first recording in English for 40 years and is planned to be made with Chandos Records, one of the world’s most highly respected record labels.

While the record company covers the engineering, mastering, artwork and distribution, the choir is seeking funds for the artistic costs including music hire, venue hire, the soloists and the period orchestra.

Visitors will be encouraged to drop in and listen at any time during the 12-hour session. The works to be covered are Bach’s Magnificat, Elgar’s The Dream of Gerontius, Beethoven’s Mass in C, Vaughan-Williams’s Dona Nobis Pacem, and Fauré’s Requiem.

And for a contribution of £10, they can join the choir in singing the ever-popular Messiah in the afternoon between 1545 and 1745.

The choir, which celebrated its 30th anniversary last year, has gained a fine reputation at home and abroad for its versatility and eclectic repertoire.

It also maintains a schedule of working with a variety of artists who include Ray Davies of The Kinks, Noel Gallagher, and Andrea Bocelli.