I've been checking my blood pressure (bp). I own one of those little machines you can have at home which claims to measure bp and pulse rate, and I chanced to find it again recently. I've got a set of scales in the basement so I think I can measure my weight fairly accurately and I have a vague recollection of my height from years ago (though I am at a time of my life when I might be shrinking). What a splendid chance to combine two interests (hypochondria and computers) and create a graph… 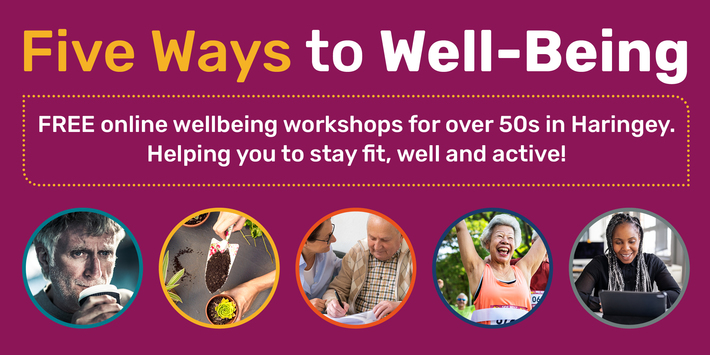 Five one-hour online workshops for the over 50s held on Zoom to help you stay fit, well and active.

- Sign up and attend all five sessions to receive your goody…

Our labour Cllrs are fiddling while Haringey burns

Democracy, accountability and transparency are always important but even more so at a time of pandemic, vast job losses and growing poverty, particularly among BAME people.  This Council may have a…

Do you have DIY and/or gardening skills?

Maybe you’re a retired trades-person looking for things to do?

Use your skills to help your community and meet local people whilst earning an hourly or daily rate.

The government is publishing information on the progress of local councils in paying out the provided coronavirus crisis support funding to businesses.

The performance table is available at:
https://www.gov.uk/government/publications/coronavirus-grant-funding-local-authority-payments-to-small-and-medium-businesses#history

GIRLS UNDER 11 CRICKET FOR ALL WINTER TRAINING

North Middlesex Cricket Club has organised winter training for Girls Under 11 and younger. The details are:
1. Dates and Timings – the sessions will be on Sunday mornings from and including
Sunday 12 January to and including Sunday 29 March but excluding Sunday 16
February (i.e. 11 x 120 minute sessions in all) at 10am to midday.
2. Venue – Beacon High School (previously called Holloway School), Tufnell…

Need to see a GP in the evening or at the weekend? Ask for an appointment at one of Haringey’s GP hubs.

Haringey residents can access more evening and weekend appointments with a GP, nurse or healthcare assistant at one of four GP hubs in the borough.…

Need to see a GP but don't have enough time in the week?

There are four GP Hubs in Haringey that have evening and weekend appointments.

Weekends and Public Holidays: 8am - 8pm

It has taken me almost 10 years to…

On the weekend of the 25/26th August I went to Delft for the World Icosathlon Championships. Lots of reasons for doing this - on 24th August I was the world champion and world record holder, but the chances were that by 27th I would no longer be either.  One reason for going was to wave goodbye to my titles in…

Luke Hollman, who plays for North Middlesex CC in Park Road N8, starred in England Under 19's victory over South Africa Under 19's.

Local cricketer is a T20 winner with Middlesex Women

The Suffragettes, Arson, Cricket and a Lady’s Hat

The centenary of some women gaining the right to vote has recently been celebrated, and local events involving the suffragettes maybe of interest.

On 7 June 1913, the Pavilion at North Middlesex Cricket Club in Park Road was almost completely destroyed by fire.  Responsibility for the blaze was claimed by The Women's Social and Political Union (The WSPU) whose members were better known as The Suffragettes, in their newspaper "The Suffragette.”  But why would …

Ethan and Luke did well in the World Cup!

Ethan Bamber and Luke Hollman, from North Middlesex Cricket Club in Park Road, both did well for England in the Under 19 World Cup in New Zealand. Unfortunately England were knocked out by Australia, however out two local cricketers did well. Ethan finished the competition as Englands leading wicket taker with eight wickets, and Luke finished with 6 wickets.

Here is a link to an interview on Sky TV with Luke: …

Luke Hollman and Ethan Bamber, from North Middlesex CC in Park Road, both took wickets in England's opening win in the Under 19 World Cup. This link to a page on the Middlesex county website gives the details : …

Haringey are stealthy increasing the amount it will cost to park in the 'Stop and Shop' zones - normally to increase parking charges there would have to be various procedures to follow - not this time.  Up until now people wishing to park could buy the appropriate amount of parking time from a machine - the cost of maintaining these machines being borne by Haringey.  Fearing the cost of converting the machines to accept the new £1 coins Haringey has a wonderful wheeze - remove the machines…

Barking up the Wrong Tree again?

This evening on the way past the Central Library I noticed that a sign had been placed on one of the three very large trees outside the main body of the building explaining that it was to be removed because it was continuing to cause damage to the pavement and other solutions had proved useless.  How sad I thought, still these things happen, and then I looked at my feet on the pavement and noticed that it was not damaged to any great extent at all.  However there were three 'tree…

London Concrete are back for more - Public Meeting

In March 2017 London Concrete submitted a planning application to lift restrictions imposed on their operation by a planning inspector in 2006.
A consultation letters sent to residents had very little details on the extent or impact the application would have.…