Thanks LizIxer for this ranty snippet from Richard Littlejohn of the Daily Mail.  She's thinking of asking him to open her childrens' school fete, just in the hope that his head might explode!

"Hackney, Haringey etc are the parts of London where they vote for Red Ken, not Boris.

These fashionable inner-city districts are home to assorted Guardianistas, quangocrats, television and radio producers, and the kind of people you see wearing Afghan hats and distributing agitprop leaflets outside Tesco Express on a Saturday morning when the rest of us have something better to do. This is not a breed noted for its humility.

These tribal homelands of the disciples of diversity and yuman rites are heavily over-populated in the public sector employment department. And it is because the rest of us mostly have something better to do that they get away with dominating debate and engineering permanent political revolution in this country.

Even the Conservatives feel they have to appease this noisy minority to avoid being labelled ‘nasty’."

I don't know what an Afghan hat is but I feel I need to get one so that I don't feel out of place nipping to Tesco.

I'll make sure we're all wearing these hats at the school fete when Dickie LittleJohn arrive, but I'm not sure we have any yumans to introduce him to - if we do, I wonder if they'll rustle up something for the International food stall.

I've found a picture of an Afghan hat and you would look very fetching in one.  For some reason I can't upload it onto this page though.

I can't say I've EVER seen anyone wearing one in Haringey or its surrounds although I did seem some men in kufis opposite Tesco Express on Sunday handing out Islamic leaflets and CDs.

Is it one of these? No, I'm not sure I've ever seen anyone on Green Lanes in one either, certainly not outside Tescos. I do quite like them although I think they'd make me look like a cold grandma rather than a disciple of Di Versity. Anyone know what she preaches? I do hope it is actually how to engineer permanent political revolution in this country, although I don't think that would give me enough time to perfect my choc chip cookies which still need work.

We have been a bit rubbish here in the tribal homelands at actually getting everyone to join the revolution though since racist, homophobic $£*&s like LittleJohn still manage to get paid squillions of euros to write bile despite our best efforts. 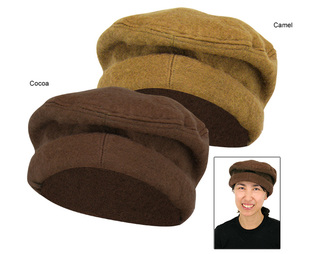 That's the sort of thing, though the ones I saw looked a little rounder and gave the wearer a more revolutionary look, which is probably what you're after!  My head or rather my hair is too big for such a hat but I'll look into buying some for the young cupcakes, whilst we as a family practise losing our humility.

Permalink Reply by Adrian Essex on May 11, 2011 at 12:33
I actually have got a very big head. On my recent CBT course the XL size crash hat had to be forced on to my head. I am grateful to Littlejohn for pointing out that this is due to my lack of humility.

This is my referendum article of choice.


The particular reasons why these places voted as they did will doubtless be studied long and hard by psephologists and demographers, and they will provide material for many a doctoral thesis in years to come. But it is hard to escape the impression that these 10 districts between them represent apretty formidable concentration of brain power and diversity of all kinds. Could it be, perhaps, that we are looking here at a bold intellectual and political vanguard that may one day be vindicated? If so, Oxford, Cambridge and the rest are not unrepresentative so much as ahead of their time