Well, I'll be buggied! Is this the future for our Town Hall?

Question. What do Crouch End and Fulham have in common?

The difference is that Fulham are farther ahead in their disposal process - they have done it, it is complete and a planning application has been submitted. Whereas Haringey kicked off its disposal process in June this year, two days after the end of the biggest and best Crouch End Festival yet. Arguably the worst possible time to take such a decision, and in some eyes based on a recommendation which completely ignores

i) the renaissance the Town Hall has already seen under the stewardship of the Hornsey Town Hall Arts Centre,

iii) the huge upsurge in localism both as a popular movement and as backed by central government.

So it is very much the contention of Hornsey Town Hall Appreciation Society that the Town Hall and Square should be handed to the community via a Community Asset Transfer. Read on, and if you agree come back and sign their petition.

Question. What will happen if Haringey press on with their proposed competitive dialogue OJEU monster disposal project?

Answer. No idea. Nor has Haringey. They can't even put a value on the project. The estimate of £100,000,000 to £150,000,000 is clearly just a wild stab on the dark. The existing planning permission is for 123 residential units, mainly one and two beds - say half a million each on average, putting a total value of the entire retail proposition at around £60,000,000. Fascinating to see where the additional value comes from when the OJEU papers are released.

Of course it might all go swimmingly. If the developer chosen to 'partner' Haringey takes on the role of benefactor, manages the car park development to make enough money to satisfy the shareholders and to leave a lot over to refurbish the Hall, and set up a community management company along the lines of HTHAC. Developer, benefactor , satisfied shareholders, money left over. Try fitting these words into a plausible sentence.

Question. So what about Fulham? How did their Town Hall project go? The Planning Application has just been submitted. Essentially it's a Maclaren buggy show room at the heart of a shopping centre, with flats above. How about that then?

The London Borough of Hammersmith and Fulham put it out for tender 2011-12, sold it 2013, and the Fulham Town Hall planning application has just gone in (September 2015).

The purchaser was Dory Ventures Ltd - described as an American retail and leisure group, they seem to be the private equity arm of a company owned by a gazzillionaire. MacLaren buggies/prams is one of its brands.

The plan is to turn Fulham Town Hall into a large retail development, a shopping centre in fact, with flats above the shops. The major aspect of Community access = shopping.

It's not perfectly clear what will happen to the main staircase. One Planning Document has it refurbished, but one of the plans has it removed from ground to first floor. The Council Chamber looks like becoming a hirable space (weddings probably), the concert hall becomes shops - and best of all the Grand Hall becomes, and I quote -

“The Grand Hall will become the first ever Maclaren showroom in London and is perfectly fit for purpose.  In fact, it will be much more than just a showroom. It will be something akin to the Apple genius bar where parents will come to talk and different events will be held."

There's a small museum tucked in a corner somewhere.

It's worth remembering that Historic England said yes to this.

So what might we expect at Hornsey Town Hall? 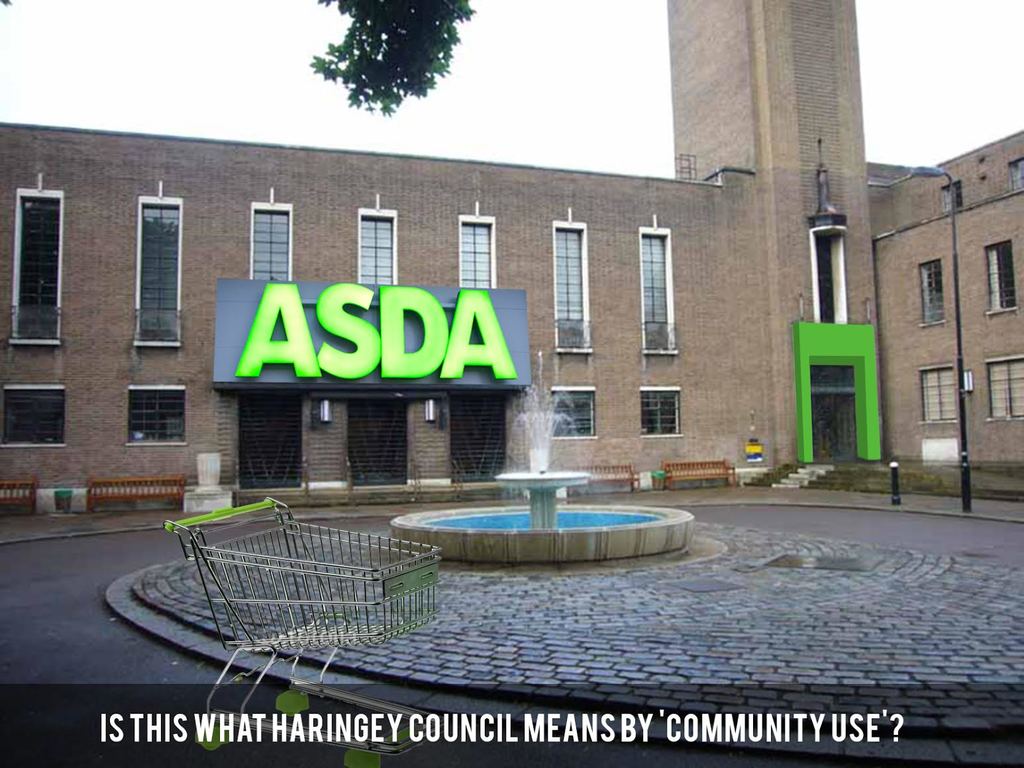 Thanks to Chris Arnold for this mock up.