We've got the @TimeSpaceCo but do we have the passing trade? @KERB_ 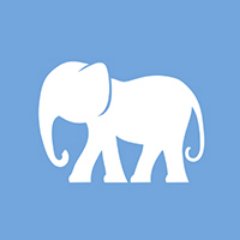 I've been thinking about this market that's going to start up in Crouch End on the bank holiday weekend. I think that this voyage of discovery might be a short one provisioned for but a fortnight. Looking at the list of stall holders it mainly seems to be takeaway food and I can't see the good people of Crouch End funding that many take away food stalls every weekend. When the Festival is on or holds its Christmas Fair , then the takeaway food stalls seem to do quite well. The Victoria Stakes I think  set up a pulled pork sandwich stall and I think it sells out. But that's on a weekend when there's a lot going on and there are a lot of attractions, and there has been weeks of publicity to draw people in. To draw people in to something they want to do , the festival , the Christmas fair , supporting your local shops.

What I haven't seen in connection with this market is anything to draw people in. If there's nothing to draw people in then it's going to be completely dependent on the local populace. So it might last a week, maybe a fortnight and then interest will dwindle. Pockets will have been emptied for that sort of expenditure and the stallholders will not be happy.
So the publicity push that Time and Space have been doing seems to me to me misguided .  Certainly they need to push the market, but even more,surely, they need to push the antique shops, the Ladies Clothing outlets, the iconic Clock Tower (North London's own Leaning Tower of Pisa), to give ever more people areason to come here.

Sure it would feel more of a contribution to the local community if this was well thought out and promoted outside the area. Bring outsiders in who will be attracted to the Kerb event but spend with local traders as well.  Crouch Enders will see through this. Take away food stalls where there are great eateries already. Why would we bother?

We took a look at the Kerb market today and were underwhelmed. £11 for a steak sandwich, anyone?  Maybe a dozen stalls, several of them offering pizza. It wasn't crowded and that was late morning into lunchtime with the sun shining. The craft stalls were even fewer and just not likely to do much business. There are only so many succulent gardens in bottles you can justify as an impulse purchase. Allegedly according to Twitter, people want to know where to park if coming from outside the area - no doubt planning a great family day out, returning home laden with exotic delicacies. I suspect a plant, as the answer was they are opening the car park behind the library for Kerb customers (from next Sat 8th Sept). This prompted the pithy response to use the many convenient buses and leave the car at home. 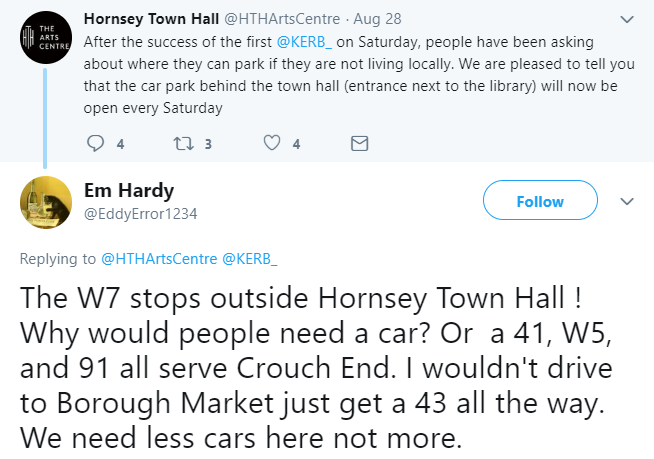 Bit of a damp squib really. It's the stallholders I feel sorry for.

Don't really disagree with any of that.

Crouch End is a 300 retail-unit town centre with no station, no tube, no car park. It's really rather an achievement it's as successful as it is, as I can't think of any similarly sized towns with such limited connectivity.

Meanwhile one of the stated aims of the TfL Liveable Neighbourhoods initiative, soon to land on these shores, is to discourage traffic by closing off roads, and encouraging people not only out of their cars, but out of the buses too and onto bicycles (the aim being cycling to the tube).

We'll be London's first no-car, no-tube, no-train, no-bus, bicycling neighbourhood. I'm not sure the vision is mini-Amsterdam as much a kind of Brigadoon. Londoners will be recounting tales of a verdant valley lost in the hills to the north, a mythical place of plenty where everyone eats at markets and coffee shops and everything, but no one who sees it is ever heard of again, for once ventured, there is no way back.

I have never mastered the art of bike-riding - and have little inclination to start now.  I see someone is recommending the library car park - a facility to be lost in the Town Hall sell-off?

The Library car park will have a seven storey block of flats built on it, the space was included in the development.

From what I read, the notion for extra cycle parking is on the Hatherley Gdns corner square, by the fountain/female statue.

From what you wrote, the notion for extra . . .  etc. If this were to become the square's purpose then my proposal of a little light pollarding of the coppice would be largely superfluous.