It strikes me that this is not a bad time to think about the Liveable Crouch End project. Many of us are dutifully remaining at home away from unnecessary human contact so we have a few moments to give it some consideration.

I'd like to thank Peter Purdie from reminding me of this. I suspect that he believes the same thing, but being an out and out opponent of the scheme he puts a slightly different spin on it.

Haringey have published a report on the recent questionnaire completed by the public. The questionnaire was something of a re-run of earlier consultations but this time with questions hinting at a slightly different range of possibilities. It arose out of reaction to the Middle Lane closure experiment which very successfully identified that the true nature of the problem in Crouch End is through traffic, and that tinkering with a few side streets is almost certainly not the answer to making the area more liveable.

Now what I've noticed is that there are many cases where the local residents come up either red or green (mainly gree) and the local businesses take the opposite view.

Clearly a detailed textual analysis is called for, but that's a lot of trouble to go to, so here are some pictures and a 2 minute video.

There are eleven points of complete difference between the views of Crouch End Residents and those of Crouch End businesses. They are

There may be some benefit to the businesses to take on board the views of their customers. 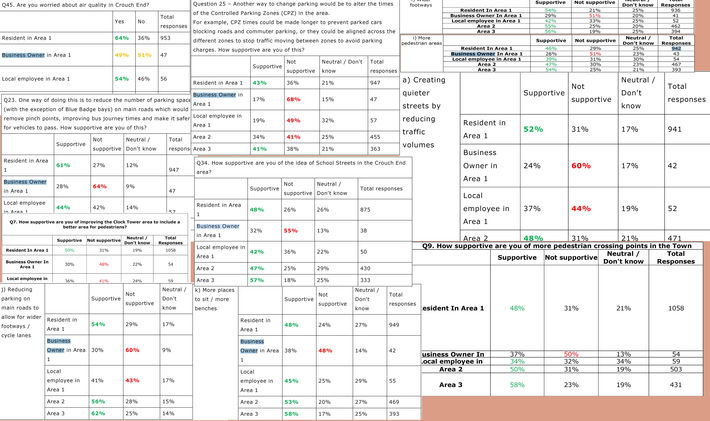 When using statistics to prove something.

First decide what answers you want.

Then you know the questions to ask.