I've become quite brave about eating out, even venturing beyond the confines of Crouch End and Hornsey. My current favourite strip of road is Seven Sisters Road between Hornsey Road and Finsbury Park Station. At the bottom end is Hana, a Japanese restaurant made particularly convincing because every time I go in there I see Japanese people eating. Not an eating place, I know, but the Handweavers shop looks almost tempting enough to take up hand weaving. The Girasole Italian cafe is pretty good too.And up nearer the station Banaadiri on one side of the road and ZamZam on the other serve a filling three course African style meal for about a fiver (soup (50p) , spaghetti/rice with meat or fish, and a banana with as much pink squash as you can drink). And all surrounded by Africans eating with their fingers. The most diverse Crouch End gets is middle class or very middle class.

But our leading councillors venture even further afield, sometimes at others' expense. When they do it must be logged in a register of interests. You can find all of these declarations of members' interest on a page on the Haringey website.

There are some of current interest. We've recently seen Cllr Jogee's putting his foot down with a firm hand over uncomradely behaviour. To little avail. Some more comrades are still at it. Note though that Cllr Jogee is a consultant (/researcher) at Terrapin Communications, an interest which he has properly declared.

Cllr Arthur has also lunched with Terrapin, in April and July of this year.

One has to admire the councillor's selfless diligence. It's probably not quite as demanding as the Vicar of Dibley's multiple Christmas Dinners, but nevertheless attending dinners for the good of the community is no doubt troublesome.

You will no doubt recall the recent fuss about the sale of Hornsey Town Hall to a consortium made up of a consortium (The Far East Consortium) a hotelier (Dorsett Hospitality) and Coplan Estates. This image is of Terrapin's Client List Wonderful Adrian.
An elegant piss-take on some of our "leading" councillors who simply don't understand how people elected to public office should behave. And refrain from behaving, if they want residents to retain even a narrow sliver of respect for them.

Of course, some of the newer people among them don't know any better. Like little ducklings following mother duck, they join the glad-handing gang and watch what "experienced" colleagues do. Assuming perhaps that "the perks" - fat allowances; tickets to football; trips to Cannes; free lunches and other troughing and sluicing opportunities - are all just part of the game. And who cares how it looks or what residents think or say.

Adam Jogee's boss - Founder of Terrapin Communications - is Peter Bingle. He was profiled by PR Week on 18 April 2008. At that time he was the Chairman of lobbying firm Bell Pottinger Public Affairs. The profile was headlined "Never Knowingly Underlunched". http://www.prweek.com/article/803000/profile-knowingly-under-lunche...

Mr Bingle clearly relíshes the world of lobbyists who lunch. According to PR Week he "... is a not a man who is accustomed to spending lunchtimes slumped over his desk with a sandwich and a copy of the FT."

" 'I have lunch once a day,' he asserts happily. Does that mean he goes to a restaurant every day? 'Over the past 20 years I've sustained the London restaurant industry and they're very grateful to me,' he jokes."

Back in the last century when I first became a councillor, another former councillor Ray Dodds warned me that some developers, planning applicants, landlords and others would all suddenly need to be my friends,to meet me on my own. And that some would be eager to offer small gifts and hospitality. "Just don't", Ray strongly advised.

Peter Bingle's name appears on some of the Haringey declarations of interest. I have been alerted to a comment piece by Bingle on Donald Trump. I'm not sure if he is applauding Trump per se, or eagerly anticipating the changes  Trump will cause. It would seem that when Bingle entertains the Haringey cabinet he is preaching to a group already converted to the notions of offshore, tax-lite megacorporations, a la Trump.

An indication of why Peter Bingle is apparently held in such high esteem by Haringey Cabinet Members is perhaps to be found in one of his postings on http://commentcentral.co.uk/may-should-draw-inspiration-from-wandsw... .

At the end of October this year, he recalls the enthusiasm of the young Peter for Thatcherism and the heroic achievements of Wandsworth Council ...

Wandsworth was once described as ‘the jewel in Mrs Thatcher’s crown’ and the reason was very simple. Wandsworth Tories were Thatcherite before Mrs Thatcher herself. Through a radical policy agenda including the outsourcing of services, cutting spending, promoting home ownership and tackling the dreadful legacy of the Inner London Education Authority, Wandsworth became the Tory flagship council. -

... he goes on to lavish praise on Haringey and, by implication, his constant luncheon companions ...

...some of the best local authorities in the country are Labour controlled. Ministers and shadow ministers have much to learn from what is being done in the likes of Haringey and Southwark.

I too remember Ray (hope he is reading this and is well) and listened very carefully to much of his advice. He held the view that planning policy should encourage social housing in the west and private provision in the east .

Planning officers echoed his concerns about developers trying to influence Councillors when they told me never to meet a developer or agent unless you have an officer present to take notes.

I wonder if the thirteenth cabinet member meetings with Terrapin were minuted by an officer? Perhaps we should ask. Reading what they discussed would probably be the nearest any of us would get to the table.

Thanks to the anonymous person who directed my attention to this tweet from Peter Bingle of Terrapin Communications. And which was "liked" by six terrapins including Adam Jogee  who is described as "Labour Member for Hornsey on Haringey Council ..."
It seems that perhaps Cllr Jogee the Labour Group Chief Whip, needs to call himself into the Whip's office for a severe talking to.
Please note that the pop-up Jogee box has been added to the original. 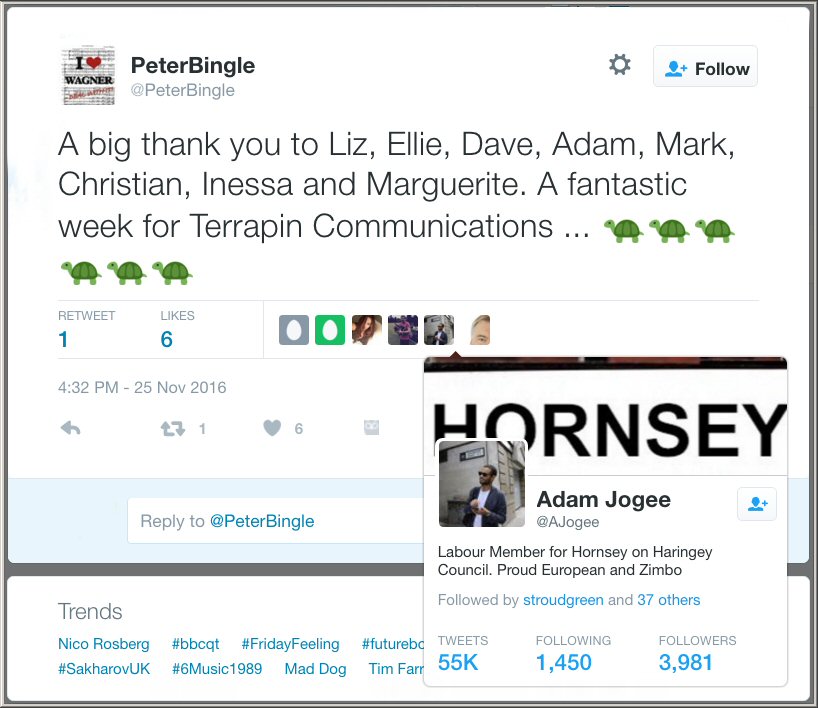 As the chap mentions over on the Harringay Online site, it isn't simply about Coplan or FEC. The companies on the Terrapin client list include Lend Lease and Starwood - both involved in the short listed 3 bidders for the grand 'Haringey Development Vehicle' partnership currently going through an OJEU procurement.

A project that size must surely attract PR grotesques such as Bingle like flies to a cow pat. And Cllr Jogee is the patsy.

I dunno whether any of this means diddly squat in the scheme of things. But at least one of the Terrapin + Kober/Strickland/Garner meetings at MIPIM in 2015 did have a familiar guest at the table. Lend Lease.

(NB. The PIN notice in OJEU for the Haringey Development Vehicle was published in January 2016)

One year later, at MIPIM 2016 Cllr Strickland has lunch with terrapin on March 15th, and the very next day made the grand announcement of shortlisted bidders for the HDV. Which happily included at least two Terrapin clients.

Of course they'll say it's all legit, and it may be. But the suspicion is that Haringey + Terrapin + Lend Lease = £2bn project (and a directorship for Cllr Jogee?). All speculation of course. Move along now.

Adrian, I was unsettled to read the front page story of today’s Ham&High Broadway, titled Storm over council links with PR firm (also on page 11) that relates to your thread.

It seems to me that the Broadway article raises a host of questions and there is explaining to be done. I am much concerned about the impression of conflict-of-interest, but this appearance would benefit from further investigation by the fourth estate.

HERE is the story from the Archant Investigations Unit.

It appeared in yesterday's H&H Broadway edition, where it also featured as a cover story.

The attached PDF file is that for all of page 11.

There are many questions that are prompted but the main one is in the story headline, Why did Cllrs dine with [Terrapin]? What did they talk about? And why did tiny Terrapin (two directors, four staff) engage a young, new Councillor, who within months of the hire, would be promoted to Chief Whip of the ruling group?

In more recent times, we've seen the unseemly hasty sale of our Town Hall, followed by the leak of an email from the Chief Whip, admonishing those Labour Councillors who had challenged that very sale.

It does not feel right.

Clive has provided a link to a Guardian article which points out just how widespread the lobbying of key decision makers is across Britain. The article is prompted by the Grenfell disaster, but covers a lot more ground, including HDV.

Adrian, a small update on Terrapin personnel for you:

Such is the importance placed on the employment of current, elected politicians as lobbyists on behalf of Mr. Bingle's developer/property clients.

Even today, Terrapins website lists Cllr. Jogee as a Consultant and coyly says, “He has a keen interest in local government”.

In similar fashion, Cllr. Hackett is described as having a detailed knowledge of local government and will bring this experience to the table for Terrapin's growing client list.

I have little doubt of the truth of that.

One has to ask, for whom are these characters working and to whom do they owe their loyalty?

"In a statement on the new job, Hackett said: “I am delighted to re-enter the property world as an account manager for Terrapin Communications. For years now politicians have said that London is moving east,  . . ." . . . some parts of it as far as Hong Kong.