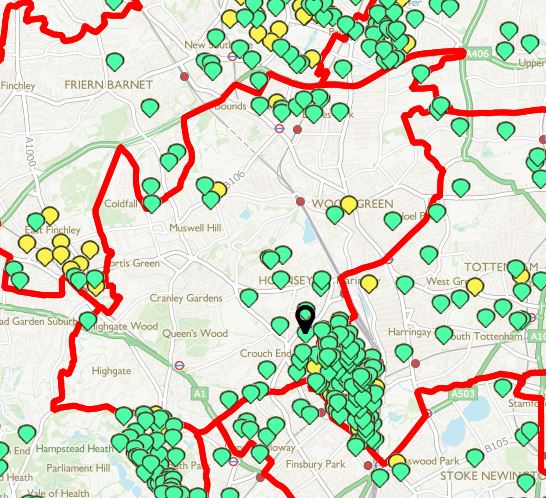 When I did a "Stroud Green" search there were nearly 175 individual comments.  Only 2 support the proposal (neither from within the ward) and the main one being from David Lammy.  Even then he doesn't seem to put forward any positive arguments for SG moving.  Rather SG is collateral damage to stop Tottenham being carved up.

He seemed to suggest that there are historic links between Tottenham and SG.  That may be true of part of SG  (I don't know myself) but where I am was part of Hornsey and despite attempts of politicians, planners et al to redraw and even obliterate organic boundaries, all my activities, loyalties and connections remain with what was Hornsey and Crouch End.

Haringey itself doesn't work.   I have sympathy with at least one comment which states how much this side of Haringey is already neglected without adding to the feeling of disenfranchisement.

The comments were found in a verbatim copy of submissions made to a consultation meeting held in Romford (Romford?) and come from Stuart Mcnamara - a Bruce Grove councillor.  At a meeting held in St Aiden's some months ago Catherine West (who did not seem to me to be up to speed on what it might mean - just my impression) wasted time talking about a House of Lords resolution that had nothing to do with the Boundary Commission proposals we were discussing. An aside was offered that David Lammy, who lives in Stroud Green, was very happy not to live in his constituency.  Hopefully the overwhelming opposition to this half-baked idea will get it thrown out as it was 5 years ago...

The way the boundary commission has provided the comments is in some cases massively unhelpful. I have searched quite diligently for 'stroud green' and 'lammy' and 'labour party' but not found them. Today however I have received 3 very useful links.

1) Exactly what David Lammy said to the Boundary Commission

2) The maps from the Doomsday Book which support his evidence

"This is your chance to say why you think it is important that Tottenham and Stroud Green are joined together by commenting on my submissions on the Boundary Commission’s website by clicking the green comment box in the top right corner: https://www.bce2018.org.uk/node/32252/view"

I am also informed that Mr Lammy lives in Stroud Green.

I disagree almost completely with Mr Lammy's assertions. His references to ancient documents and traditions have long been overtaken by the facts of modern life. He makes a very poor case for including Stroud Green in Tottenham.

Special geographical features: maps from 1087 are historically interesting but are of little practical relevance now that the East Coast main line divides Stroud Green from the Eastern half of Haringey. Mr Lammy acknowledges the importance of this divide.

Local government boundaries: It is only very recently that the Crouch End Neighbourhood Forum has been set up and has been recognised by Haringey. Roughly half of Stroud Green ward was recognised by residents, and by Haringey, as being part of Crouch End. In the light of this completely current decision Mr Lammy's sentimentality for the past is of little relevance.

Boundaries of existing constituencies: Hornsey and Wood Green is a constituency of the required size - it needs no change

Local ties which would be broken by changes to constituencies: the Crouch End Neighbourhood Forum boundary demonstrates the very strong link between Stroud Green and the rest of the Hornsey and Wood green constituency. Hornsey Town Hall acts as a focus for activities.

Inconveniences resulting from changes to constituencies: As Mr Lammy points out, Tottenham is a deprived area, Stroud Green is not. He chooses to live in Stroud Green, and while it might be convenient for him to live in his own borough, it would be horribly inconvenient for other residents to get to representative meetings in Tottenham, and the difficulties that Haringey has in reconciling the very differing needs of the East and West of the borough would be repeated across his proposed new constituency.

None of your links are working, Adrian.

I'm not sure that I really understand the concern either way about this change. From what I've read the arguments seem to be essentially about tribal affiliation. Have I missed a well written piece somewhere?

The links that don't work are those supplied by Dawn Barnes, whom I may never quote again.

Tribal affiliations, common causes and depth of local feeling in an area are powerful forces, else how would HoL be so successful? I think you are missing something.

I'd second Adrian's remarks: a local sense of identity is the root of civic engagement (even if it's only through the more tangential connection of the local Parliamentary Constituency).

For example, how did the initial consideration of whether to include part of Harringay within the nascent Finsbury Park & Stroud Green Neighbourhood Area go down with the commentators on HoL?

David Lammy is clearly fighting to save his seat which currently has too few voters and therefore needs to be ither carved up and redistributed, which is what the main political parties want, but to different ends suiting their own political agendas - or by adding a ward, which is what the Boundary Commission want, offering Lammy a simple solution to his dilemma.  Of course it would make much more sense if a Wood Green ward which shares geographical and historic links were to be added to Tottenham, such as Noel Park, but he goes for the simple option offered by the Boundary Commission, adding Stroud Green to Tottenham and adding another northern ward to Hornsey and Wood Green.  A large part of his comments which ramble on a bit (Lead Commisioner - page 35 - "Are you drawing to a conclusion?") focus on geographical and historical issues but even these do not support his argument - it is the other local labour speakers who comment about Stroud Green.  There are no links between SG and Tottenham because SG is on a hill (the Victorians called it the Norther Hogsback) and now, critically, separated by the railway line.  So - comment away folks...

Perhaps we should be more worried about the Labour Party (pro-Corbyn wing) rather than David Lammy's comments. This appears to be their proposed constituency -

I'm guessing a bit, but this appears to be the Conservative counter proposal, with N8 mostly going East, and Muswell Hill and Highgate divided away. Presumably to keep the riff raff out and give the tories a chance at winning a seat.

A revised and corrected map for the Conservative proposals is below. Whether any of this makes the cut is unknown.

The CE Neighbourhood Forum was designated in December 2015 and seeks to represent the views of 19,000 local residents. We are disappointed to learn that the current BC proposal will cut the CE Neighbourhood Area in two - but satisfied that the overwhelming number of representations on this website recognise that the wards of Crouch End and Stroud Green have long historical, social, and geographical links which deserve to be preserved.

Other alternative proposals made by the political parties have also come to light which seek to split the area into two constituencies. These are arguably worse and appear to represent narrow political aims.

Crouch End itself is awkwardly split between 4 wards (Crouch End, Muswell Hill, Hornsey and Stroud Green) due to an earlier redrawing of boundaries to equalise ward electorate numbers. We feel that in order to preserve any sense of community, these wards should be kept as a whole.

After consulting locally, we see no reason to change the current arrangement - the present constituency of Hornsey and Wood Green clearly meets the size criterion, and therefore does not need this unwelcome change.

Attached are the conservative and labour proposals with various green highlighters to identify local interest.

From Labour we read

and from the conservatives

But I still don't know which BC node to look at to find these.

My comments on the matter are here.