At four o'clock on a Thursday about 100 people turned out to support the views of Catherine West MP that Hornsey Town Hall should remain a public asset operating for the good of the community, and that the housing should have a substantial element of affordability. A show of hands revealed not one person in favour of a hotel. Obviously such a meeting would be impossible in the foyer of that very self same proposed hotel.

When Catherine mentioned Alan Strickland the crowd boo-ed, just as they do when Wicked Uncle Ebenezer appears.

btw, have you signed the petition yet 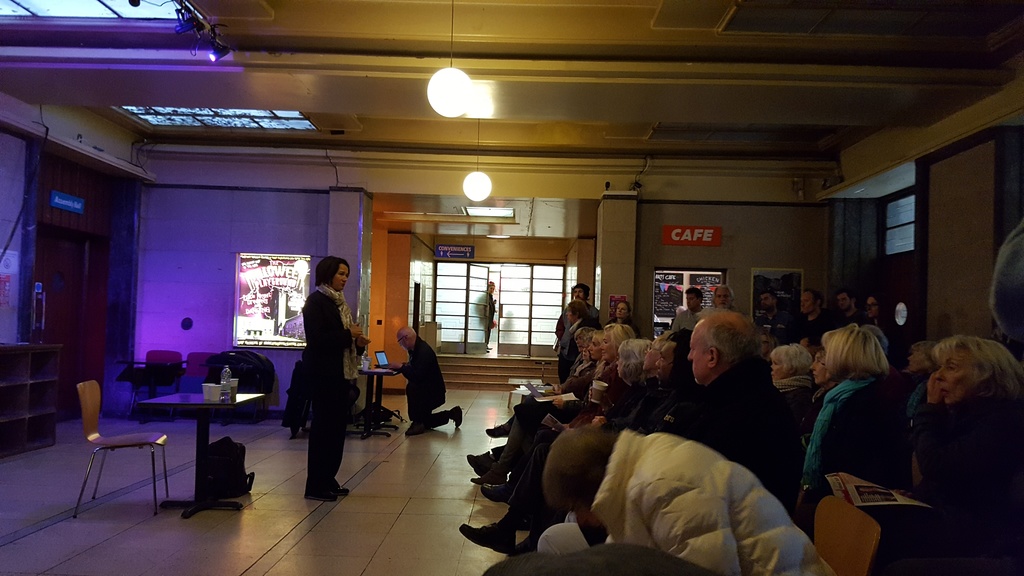 I have heard it said that the Labour party more widely across Haringey is unhappy with the proposed sell off. So far the branches have stuck to the party line, when debating this motion:

‘ This ward calls on Haringey Council Executive to urgently re-consider the recommendation to agree on 18th October sell Hornsey Town Hall and its public square to the property developers Coplan Estates and Far East Consortium - registered in the Cayman Islands. We do not believe the Coplan Estates consortium has the best track record in delivering away forward for the site that will satisfy the demands of the local community. By contrast the alternative consortium, headed by Tishman Speyer have a solid reputation for providing workspace for charities and also championing sustainability; instead of a hotel they propose a mixture of arts and community use, with sustainable zero-carbon housing on the car park site. As this proposal is very close to Haringey’s own 2010 brief for the site, the Executive should explain the reasons why it has rejected and instead chosen such a risky option. We ask the Council to reconsider rather than move forward with a scheme that will alienate the council and Labour Party from the local communities.’

I have to ask – why are people so against this hotel?

What do people want instead? Housing? Our services can’t deal with more people moving in. TFL can’t cope as it is – the W7 bus is constantly overcrowded during rush hour. And our clinics and schools are already oversubscribed  (it takes me weeks to get an appointment at the Vale practice. More often than not I have to go private.)

I’d expect a boutique hotel to bring in well-heeled people to our area, people who will have disposable income to spend in Crouch End, helping our high street.

They plan to develop a sustainable arts centre.

Correct me if I’m wrong, but I believe the Green will remain accessible to the public.

So what’s the issue?

It's all about the detail - and the risk.

The housing is much the same in all the bids and projects - including this one. The difference here is that the Hotel occupies the space currently used by small local businesses. Apparently there are some 130 people working in there - mostly local, buying their services and sandwiches from other local businesses. The hotel would likely employ no more than 60, if that - a net loss of jobs.

If the occupancy rate is an average of 60%, call it 40 guests - 15 have business elsewhere, 15 are eating in house, leaving 10 people looking for dinner in Crouch End. Not a transformational change for the local economy.

Of course the hotel could fail - and what then?

The arts centre is much reduced - shrinking to the main auditoria. A venue really, and venues of that size are rarely secure businesses. Particularly privately owned ones without public funding - as this one would be.

The square will remain accessible - but how do you know the green will remain? There's nothing in the proposed lease, the new owners could pave it over if they wanted to. And even if they don't, the council really don't need to flog the space off to overseas property speculators, they could just mow the lawn every now and again.