Stop Smart Meters - Thames Water are now in the area

I posted a photo yesterday of four Thames Water employees standing in a group around my water meter. Yes, four. It's only a tiny water meter, it's been there for years, no one has ever read it, I have never been charged on the basis of whatever it is it tells us. It is completely superfluous to requirements.

One of the four came to the door and asked me some questions. Had I had a letter? Did I know they were starting work? Is this your name? Is this your telephone number? It was when he got to "how many bedrooms are there in this house?" that I began my programme of assertion over apparently authoritative people who come to the door. My questions "Why do you ask that? I don't want to tell you. Just what is it you are planning to do?" His reply "We're going to instal a smart meter." My response "Why? I don't use the one you put in years ago. I don't want a smart meter. I don't want to pay for a smart meter".

He turned and walked away. A Hi-vis conclave ensued around my dumb water meter. I don't know how dumb the conclave was, but I took a photo of it. You can see that the one in the beanie hat is thinking of intervening in my photography. But he didn't.

And now I know about "StopSmartMetersHaringey" and "StopSmartMetersUK" and the International EMF Alliance, thanks to Mark's response. It has brightened up my morning to know that such citizen led initiatives exist.

They UK chapter of the movement describe the UK's Smart Meter programme as - "a £12BN white elephant in the making that will empower Big Energy at great expense to consumers".

Please tell Thames that not only do you not want a smart meter, you don't want to pay for overmanned gangs of Hi-vis jackets hanging about on street corners. 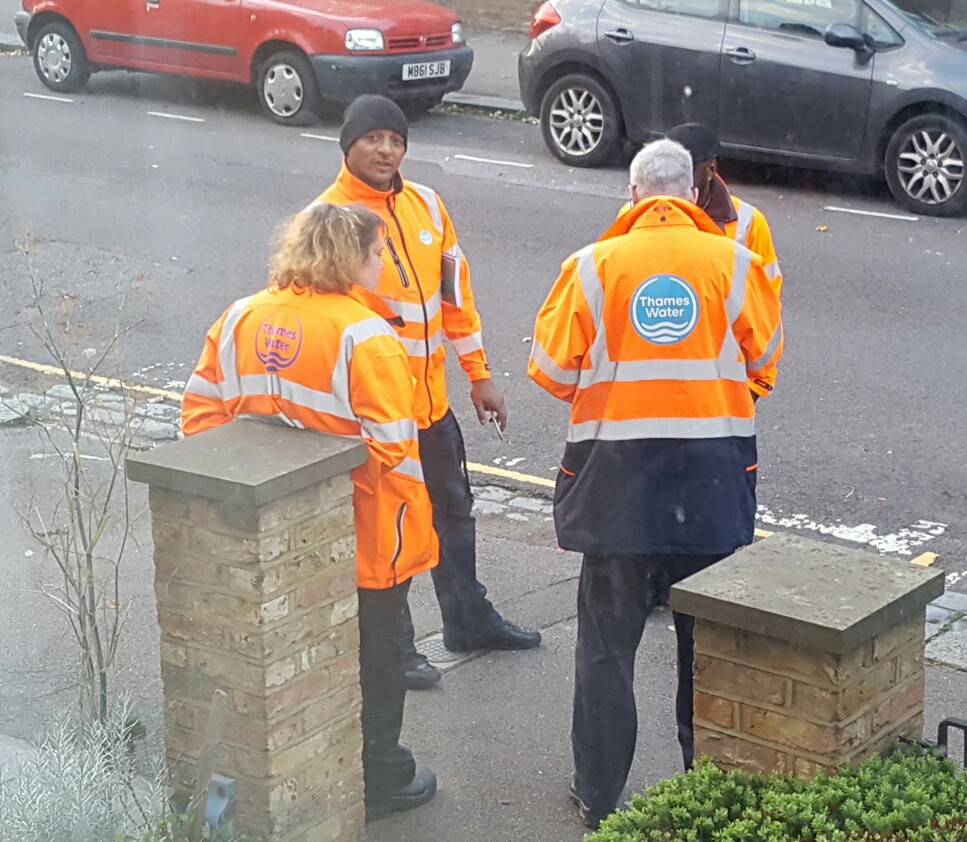 If you dig out the letter you will find that you are now going to be obliged to have a water meter. All Thames Water customers are, and there is legislation to enforce this, since we are regarded as being in an area of potential water shortages (ie London & SE England). I'm not aware that it has to be a 'smart meter'. Most houses already have a meter in the street where the pipe branches off to your house, which is disabled at present if you are still paying a fixed annual charge. This just measures your total water usage.  Presumably a smart meter is an option whereby you have a display in the house which shows you your usage at any one time.

I'm confused aren't smart meters to do with gas and electricity?

I had a water meter put in a couple of years ago.  Since then my bill has more than halved.

I guess a meter is a meter whatever it measures - and Thames have latched on to the idea. But halving the water rates is a good result - have you consciously used less water simply by having the meter? Or just the same but a more realistic cost.

A bit of both.  Living alone, I was paying well over the odds.  I think my last full unmetered bill was around £300.  Apparently the fixed costs are based on the estimated usage of a family of four.   So assuming normal usage for one person, I was saving already.

However, getting a meter also focussed my mind on what I was using and wasting.  I used the shower at the gym (when I was a member), my own shower has an eco setting, I rarely have a bath (who does these days anyway), I have got into the habit of not brushing my teeth with a running tap, use a washing up bowl etc. etc.

I could probably save more if I really put my mind to it.

Now that it looks like metering will be compulsory in the Thames Water region I can't wait to sign up. I've hesitated in the past because I thought it would detract from the property. My meter was fitted weeks ago - before the letter telling me about it arrived. The leaflet through the door suggests my annual bill will be about £168 a year because I live alone. Compared to my present bill of over £700 pa you can see why I might be excited. I might be able to afford to go to Irvin at this rate!