Save Ally Pally's picture of the current proposals for redevelopment

From Save Ally Pally

A picture is worth a thousand words. Attached is an illustration showing the original SE wing of AP as the BBC rebuilt it in 1936 to make the world's first HD public television station, with the areas affected by the current plans on exhibition indicated in colour.

The proposed plans will be on display at the Wood Green Shopping mall from midday to 5 PM, Sunday 12th October.

Working: to safeguard the birthplace of modern television,
the Father Willis Organ and the Victorian Theatre and to secure
Alexandra Palace for future generations of Londoners, by
putting the People's Palace back in the hands of the People. We went to see this display in the East Entrance at Ally Pally last week and thought it was well presented. The boards and model were informative and it was easy to understand the focus and scope of the project. There were a couple of representatives on hand to answer questions and they encouraged visitors to fill out feedback surveys after viewing the displays. The plan is backed with Lottery money so there is some accountability and a strong project plan in place. The asbestos problem will be dealt with and the entrance lobby, theatre and TV studios brought back into use in a number of flexible ways relevant to todays' visitor expectations. I'd encourage anyone who uses Alexandra Palace to go along to Wood Green and take a look at the plans. If only something similar could be implemented at Hornsey Town Hall ....

FROM all the information presented, it would be easy and natural to take away the impression that the proposal is flawtless. For the bulk of the design team's proposals (theatre, the ice-rink foyer and even the steps/auditorium, I have no issue. The display panels contained some great images; unfortunately, the text was scrunched up together and did not encourage reading (pic below, click to expand: warning: hard to read) 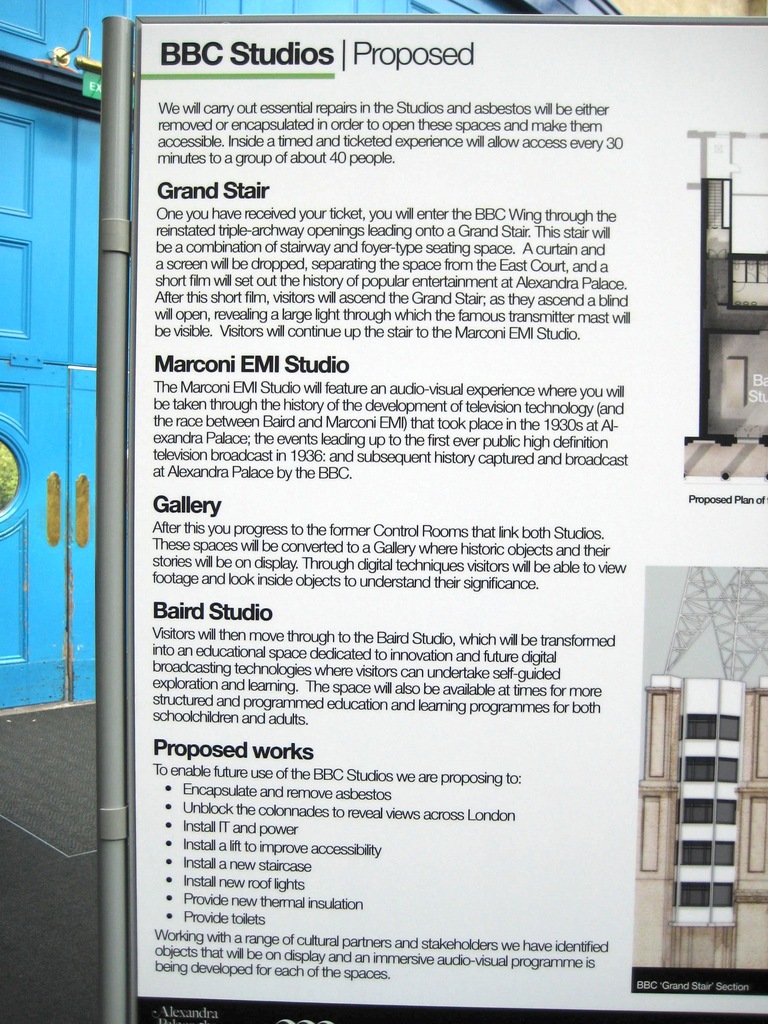 was easy to understand the focus and scope of the project

Up to a point, it was easy to understand what is proposed: but its not about what is being said, it's partly about what is left unsaid. There is little or nothing about the outline of the studios as they are today or were in the past. Especially during the pre-war (!) period and most especially, the extraordinary months between November 1936 and February 1937, when John Logie Baird's bizarre, steam-punk-like apparatus competed, on alternating weeks, with the all-electronic Marconi-EMI system next door!

The displays are billed as an "exhibition", rather than a Consultation, despite the availability of the feedback survey's you mention.

In order to be a lawful consultation, certain standards have to be met.

Sadly, the representatives may have misled about some aspects. One visitor (not me) was informed that the Council owned Alexandra Palace. This is untrue: we, the people, are beneficiaries of a Charitable Trust. But this, the true legal position, is not something the council wishes to promote, lest it restrict their freedom of action. I won't recount here their earlier, repeated failed sale attempts.

The question is that, if one knows about the history of what actually took place within the walls, is this then a sensitive, sympathetic adaption, or is it the imposition of modern multi-media rooms that could be anywhere in London, or the world?