Sorry folks, that should be,

. . . can you find us a ship that's not sinking? Apart of course from Great Britain now that we've begun to break sort of free-ish.

Leaky boats all, I'm afraid. I'm just waiting to see who can get the bung in first.

One could be charitable and see the point in her insistence that joining the Labour administration is the only way to actually get things done - as mentioned in her statement to Richard Osley of the Camden New Journal.

But where does that leave politics in a one party state? Conform or die? Marginalised or booted out like Alan Stanton? Resistance is futile it would seem. On the national stage the Labour Party keeps reminding people of the importance of a coherent opposition - but in Haringey, with its built-in Labour majority, no opposition is effective, no opposing arguments listened to?

Meanwhile, Hornsey & Wood Green Labour party tweet about how pleased they are that "Crouch End is fully Labour again". I'm sure they are - but it isn't what local people actually voted for is it. By-election anyone?

On the national stage the Labour Party keeps reminding people of the importance of a coherent opposition.

As an Opposition Councillor I know close-up and personal how important it is that there be a formal Opposition. Without an Opposition—particularly given the current authoritarian local administration—so much more would be suppressed or swept under the carpet. A bit like a Soviet state.

We have seen how they treat their own side: Cllr. Gideon Bull (suspended for speaking up), and then the bullying attacks under Labour Chief Whip Adam Jogee on his Labour colleagues, who twice had the bravery to mount Call-ins of a Cabinet Decision.

The recent election by secret ballot, within the Labour Group, of Cllr. Joe Ejiofor to the position of Deputy Leader is a small, hopeful sign.

Joe was the Lead Signatory of the rebel Labour Call-In.

Appointment to the Labour Cabinet is in the exclusive gift of the Leader of the Council. The big question now is, will the Council Leader appoint Cllr. Ejiofor to a Cabinet role?

Much hangs on this decision.

A small correction if I may. I wasn't actually "booted out" of the Haringey Labour Group of councillors. Having been elected for four terms from 1998 onwards I'd decided 16 years was enough. And although I was then on the right-wing of the Labour Party I am not a Tory and under Kober we were increasingly being whipped to vote for Tory policies.

When I voted against the appointment of Nick Walkley as Chief Executive I was told that disciplinary action needed to be taken against me. I suggested that they take no action since I was not interested in standing again. I suggested they read the story of Brer Rabbit and the Tar Baby. They suspended me for three months, with a stipulation that I take part in retraining.

I never applied to go back into the KoberTories, explaining that I didn't have any spare time to teach councillors about socialism.

Clearly the reaction is more 'meh' than anything else, but just in case anyone manages a 'wha?', or even a 'ugh?', here's Sarah's statement.

The table below shows the votes cast at the last local election in Crouch End. 4,136 in favour of Labour, 7,899 not in favour of Labour. There was a referendum recently when a majority voted in favour of leaving the EU. Do you recall the fuss the Remnants made when they found their dearly held prejudices had been overturned? They wanted to vote again, to declare the result as merely 'advisory'. Well, I think I feel pretty much the same about this. Like the majority of people in Crouch End I want someone other than a Labour apparatchik to be my local councillor.

But, hold on. What do we now actually have? Sarah Blessed Elliott has walked away from opposition and joined the majority party. This craven capitulation completely denies me (yes, I confess again I am not a Labour voter) any democratic representation whatsoever. She may be right about the LibDems. Their particular brand of knee jerk opposition, their Pavlovian conditional responses causing them to salivate and bark loudly at the first hint of anything to object to, is not really what you'd call constructive. Lyn Weber noticed the same thing, but had the courage and independence to remain an opponent of the Labour juggernaut.

Not so our Sarah. She really should resign. 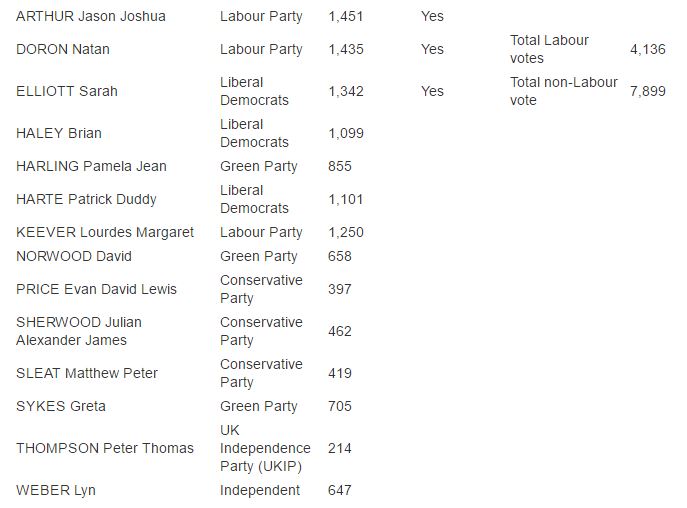 Bit of an open goal for anyone with a passing interest in fairplay etc. I think democratic deficit is the phrase, and I speak as a sometime Labour voter.

Mind you you have to be careful about expressing support for anything other than the party, one slip, and you're on the outside...   below is a letter that did the rounds on twitter... 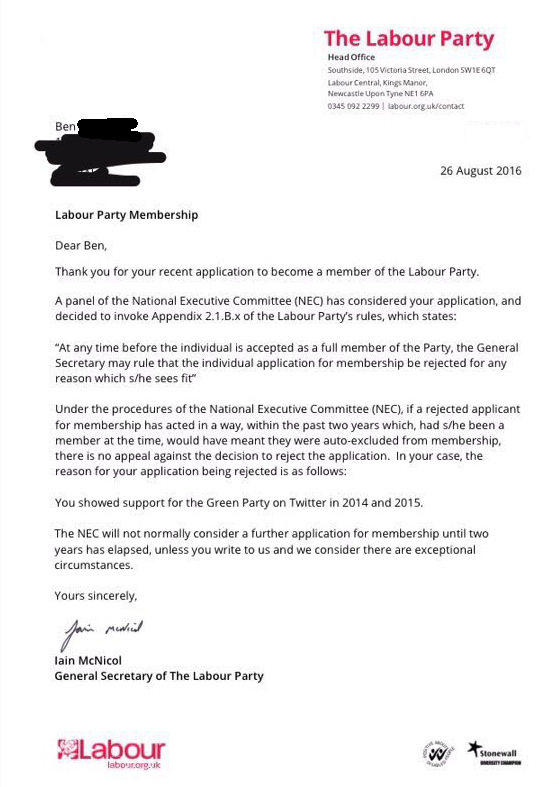 Now, I know what you're thinking here. But allow me to ask the question anyway...  How come the Labour party refuses to let an ordinary pleb join on the grounds of committing thoughtcrime, but SE gets the nod to take the whip without so much as a raised eyebrow?

Permalink Reply by Adrian Essex on September 2, 2016 at 20:45
I think the distinction may not be pleb/nonpleb , but is your motivation for joining simply to make sure the party is unelectable nationally. An arena where SE has previous. I wonder if Bill got in? Flob-a-dob.
.

Perhaps someone is supposed to actually join the other party first instead of just mentioning them in a tweet or two. Then with a bit of luck, become prominent in that other Party. Sarah Elliot was for a time the Leader of Haringey LibDems.  At some point this was followed by secret talks with Claire Kober.

I assume she was seen as some sort of prize catch. Though nobody I've asked about her seems to have any idea why. Or what contribution Cllr Elliot has made or is making to the Labour Party in Haringey.

This may be unfair as I've never met Cllr Sarah Elliot. For all I know she may be a very thoughtful, knowledgeable person brimming over with fresh ideas. But if so I've never heard of any.

_______________
NB My mentioning Haringey LibDems on this website does not in any way indicate approval of their Cleggite policies. Nor am I in talks with their new leader whose name I seem to have forgotten. You know who I mean. The Evening Standard says he wears a fedora. Whatever that is.