I've been taking an interest in the Liveable Crouch End project. This is described by Cllr Hearn, Haringey's Cabinet Member with responsibility for saving the universe, as an 'act of love to Crouch End' (yes, really, follow the link and watch the video). But there might be an argument to be made out that actually it is a solution looking for a problem.

I feel pretty sure that at the outset one of the problems the project was going to solve was rat-running, which is cars taking short cuts down residential streets to save sitting in jams on the main road. Thinking about the shape of Crouch End and the types of journey made by car I wondered if this is actually a problem. 89% of traffic in Crouch End is through traffic, and I find it hard to picture which side streets actually serve as short cuts for any one just passing through.

Luckily I have at my disposal the most modern of online , real-time, future proofed tools guaranteed to provide me with totally scientific, unbiased, accurate, all-inclusive and relevant information. Yes , I ran a survey on the Crouch End Appreciation Society Facebook Group.  I'd like to thank everyone who contributed, and especially for not mentioning Hitler. In what follows the conclusions can only be considered the most general of indications.

Conclusion 1) more people in Crouch End do not have a problem with rat running than do, by a majority of 58 to 42. I'm inclined to accept this at Facebook value because in general people who have something to complain about tend to be more outspoken than those who do not. 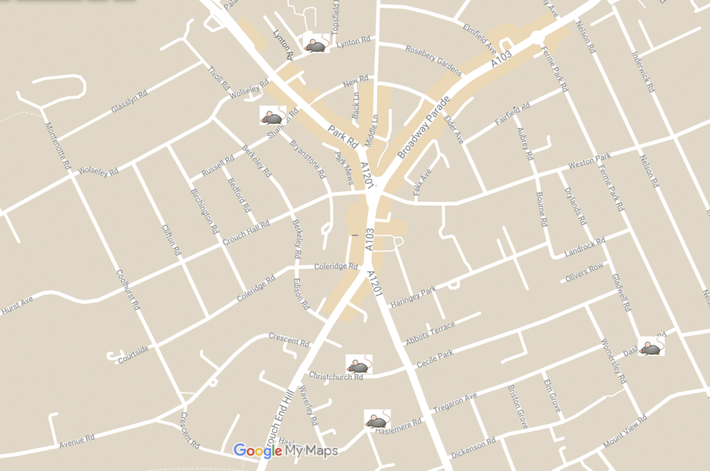 Conclusion 4) I am pretty sure that by starting with the solution (a Liveable Neighbourhood with cycle paths and modal filters) rather than looking at the problems Haringey has not engaged with Crouch Enders in the best possible way.

Conclusion 5) that the interactive map used by the Liveable Project has correctly picked up many of the problem areas, but that by asking for solutions it has to some extent clouded the issue

It also strikes me that much of what the Liveable Project is proposing will bring benefits, with relatively little inconvenience. Two of the ideas proposed are 'cells' and road closures.

A cell is an area of roads with only one point at which it is possible to both enter and leave. This means motorists cannot drive through the area. Roughly such cells might be as on the map below. Such cells would address all the Facebook identified rat runs except Lynton Road, where the problem is different. In Lynton Road two wheelers are the problem as they shoot through the existing 'modal filter'.

I have written to the Chair of the Liveable Crouch End Project asking that the layout of the cells be made public and await a reply, but the project seems to regard this as an unsuitable way to proceed. If you want to know a bit more precisely what is being proposed perhaps you could write to her too. So, very roughly the map below sets out where the cells might be, and also shows where (again very roughly) Middle Lane, Ferme Park Road and Shepherd's Hill might be closed to all traffic except buses. I think these traffic management proposals, combined with wider pavements in the Town Centre and a new square around the clock tower could well bring benefits to Crouch End. And that would then bring us to the questions of the cycle paths and the CPZ timing changes.