OpinioN8 has received the following comments by email. Only part of the email is reproduced here, but this does not in any way affect the sense. The original email is from a planning consultant acting on behalf of "the new owners" of the Hall

Turning to the former club premises, the change of use options, including other community uses and residential conversion, have been explored without success, for both financial and practical reasons.

My honest opinion, having inspected the building, both internally and externally, on several occasions, is that the time has come to consider redevelopment options, for the following reasons :-

1.  The lack of a viable use for the existing redundant building

2.  The lack of architectural merit in the existing building, which has been much extended during its life, particularly the two ugly flat-roofed single-storiey extensions at the front of the building, which, in my mind ruin the front elevation of the original building. It is not even locally-listed, and is not protected from partial demolition, due to the vagaries of Planning legislation.

3.  After speaking to you, another reason to replace the existing building crossed my mind. The club was erected in 1928 and named in honour of Earl Haig, who you will recall was largely responsible for the death of one million British soldiers in the First World War, and the wounding of millions more. These were all A1 young men, and many historians agree that this country has never recovered from their loss. I find it highly distasteful to perpetuate a memorial to this man, and, coincidentally, when I met his grand daughter socially some ten years ago, she stated that she was deeply ashamed of him for the tactics he adopted, which lead to so much loss and misery.

4.  Last, but not least, is the opportunity to erect a much better building, which would respect the character of the area and the street scene, and provide a high standard of living accomodation, in an area of high demand. As discussed, my Client and I favour a 3 storey development of family flats, as the rear windows of some of the flats over the Queens PH directly overlook the site. Nine 2 bedroom flats would fit comfortably on the site and I am currently preparing a feasability plan. Alternatively, a  terrace of 3/4 houses would be acceptable to my Client, if overlooking of the rear gardens could be satisfactorily dealt with by screen planting. In any event, I envisage traditional architecture, which would harmonise with the adjoining buildings that possess great character and style. As you know, the Queens is a magnificent Listed Building, both inside and out, and the relationship between any new development and this building is obviously of prime importance. Car parking to serve the new dwellings can be provided behind the proposed rear gardens, and would be accessed from Fairfax Road.

I know that the conversion of existing dwellings into flats is not allowed under the UDP in this area. I guess that would apply to new build as well?

Just around the corner in Fairfield Road a new dwelling is being built on a site formerly occupied by garages. Parking features large in the decision notice with the Transportation Group objecting to the loss of parking spaces

The decision notice also makes it clear that the visual break provided by the single storey garages is important to the character of the street, so this development incorporates an underground level to make it two storey. If this consideration applied to the Hall then only a low rise replacement would be allowed.

The building in Fairfield Road appears to be completely featureless (see the image below) - does this constitute "outstanding contemporary". There is something similar at the bottom of Wolsely Road.

The planning condition relating to use of a timber frame has also been ignored, because timber frames now have a long lead time. Fair comment about the visual 'bulk' of new development in an existing streetscape. Certainly I could see height limitations applied to the Legion Hall site, but nothing less than that already standing, but room I believe for some increase in height.

As for the new house in Fairfield Rd, it's a house pretending to be a garden wall. Nothing outstanding about it at all because it's purpose is to disappear. The best possible outcome here is that quality reclaimed stock bricks are used and that the glazing and roof detailing are also of high quality.

In the same way that the current Legion Hall is a unique component in the streetscape, so too should it's replacement be allowed to be unique, and definately not a row of repro Victorian terraces because we can't think of anything more imaginative or have the courage to leave that style to the Victorians who did it best more than a century ago.

Fair enough, no offence taken and likewise no predetermined ideas which only limit creativity.

I see a lot of contemporary infill development in our neighbouring borough of Islington which represents construction and design of high merit in a new century, recognised by a planning department and residents with the skills  to do so, which also manage to sit very well in a historic streetscape. Are we not part of history?

When we start to demand that same standard for ourselves (not necessarily at great cost) we can not only achieve buildings for the 21st Century which address and provide for the new challenges we now face globally, but also buildings which surprise and delight every day we walk by.

Does anyone have any feed back on this replacing the Hall? 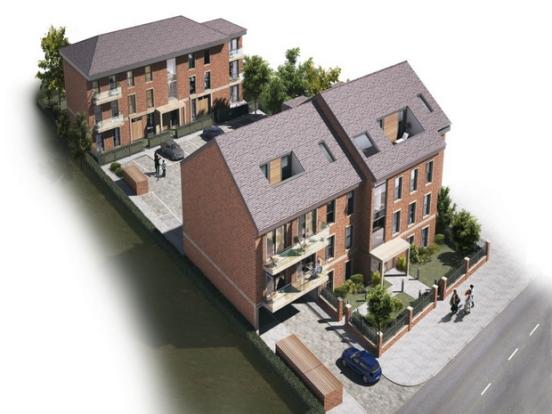 I've made a couple of phone calls to try and find out what is going on but keep missing the people I want to talk to. The estate agent's website still says "under offer" but a conversation I had with one of the staff in their office said this had fallen through.

What is the picture? Is it a serious suggestion for the British Legion site?

Does anybody know a contact for the building and if there would be a chance to hire the interior small room (with stage) for one day filming of short film ?

I think the relevant parties are following this thread. If you have not heard, then no news is probably bad news.