My taste for Virgin

One of the things I see from time to time on Twitter (I still don't really get Twitter - its not good for 1-to-1 comms 'cos its so public, and the time involved in sorting the chaff from the dross in many-to-many comms is just prohibitive) is complaints about the Virgin service in N8. Now I'm a great believer in the cable delivery of the services Virgin provides. I lived through the Cable London excavations of 19 something or other when every pavement in the area was simultaneously a trench and walking anywhere was fraught, so cognitive dissonance plays a big part in my commitment, as well as the avoidance of Murdochian carbuncular excrescences on every building for miles around.

But generally I have not had a real problem with Virgin and its services for a long time. This image shows a graph of the speeds I get on my broadband. 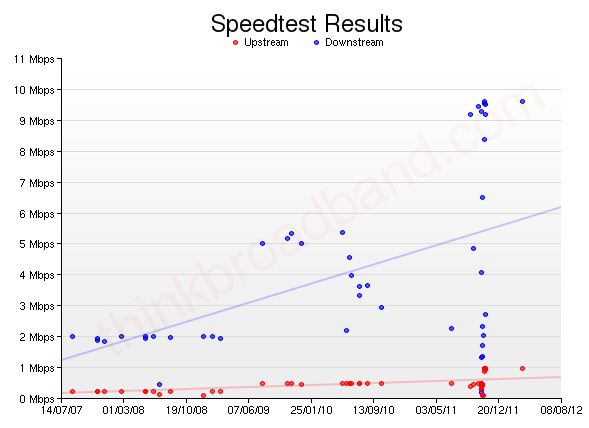 Its very clear I was getting 2meg until '09, 5meg in '10, bit iffy in ;11, but now I'm pretty reliably getting 10Mbps. I haven't changed my package, I still pay only for as little as they will provide and rarely have cause for complaint.

The vertical line in October last year I blame myself for. I'd failed to record the first couple of episodes of a TV series and I tried to watch them on one of the television channel website catch up thingies. Well obviously that's not going to work, TV over the internet is just such a huge overhead everyone should avoid it.

I've got a V+ box which is fine, and a landline, which older relatives still use to call in on. I've got a Virgin  mobile package with more mnutes, texts and megabytes than I can use for a tenner a month

I'm really quite a Virgin enthusiast.

We also have a V+ box (via cable), but have noticed recently, let's say in the last month, that ITV and Channel 4 (but not BBC1 nor BBC2) are suffering considerable data loss in transmission - both audio and video (I use the word advisedly).  I've reset the box from its front panel a couple of times, but the problem persists. Me thinks a full power down will be next.

I have absolutely no idea what your graph denotes but our Virgin service is quite patchy too - N8 seems to be a bit of a trouble spot. I wonder if it's anything to do with all the wires that are routinely pulled out of the open metal boxes on the side of the road.

The title of this thread is actually quite distasteful though, I wish you'd change it. Me being quite the prude.

If you have any trouble with Virgin, with any of its services or poor support here's some advice.

Ring them up and rather than ask for technical support ask to be put through to the people dealing with customers leaving Virgin. This is a section of the company that work in a completely separate way to the rest.

Their mandate is to prevent "churn". This means that there are little or no new customers out there as those that want, say, broadband already have it, so they have to take customers from rivals and keep their current ones at almost any cost.

If you threaten to leave (because your package isn't working properly) they will bend over backwards to help.

If you are lucky, they will even reduce the cost of your package (this has happened to me four times in the last two years). I have a 50 mb broadband package that never dips below 48 mb and pay 20% less than the advertised price.

This is excellent advice. I also have my mobile phone services from Virgin and my customer loyalty incentives are now so great that I get more minutes, texts and Megabytes than I can possibly use for £10 a month.

Loyalty incentives are generous with many companies, though not with HSBC, about whom I have written before. The final straw in their coffin was the offer of an extra 1% loyalty bonus on my savings account - when the confirmation letter came through it was actually only 1% extra on new money. So I have now changed banks.

That sounds like a very good deal Adrian. "All things are negotiable", some economist once said.

If you want to make your broadband even faster and you have a wireless router, change the default channel in the router to an obscure number, say 5 and it will be even quicker.

Mac users out there? If you browse in Safari go to "preferences" under Safari, choose the RSS tab

and change the feeds to Mac Mail. Result? 25% minimum speed increase  of the browser often more.

RSS slows everything down and so stops working if its fed to Mac Mail. Simples!