Mobikes over the hill

A large pod of 'Mobikes' has been spotted occupying a corner of Elthorne Park on Hornsey Rise (near where the Favourite used to be). Dangerously close to N8.

This is another bike hire thing, with smart bikes that know where they are and connect via an app to users. A Chinese company, they expanded to Islington borough the other day. Now what happens if you grab one, cycle into Haringey, and leave it in Crouch End, I dunno. Do they self destruct?

Or perhaps they'll just find their way to the nearest canal (as Manchester reported).

And here's a nice pic of the Chinese operation.

My favourite suggestion from the CENF Christmas Fair is a drag lift/tow rope to get cyclists out of Crouch End. 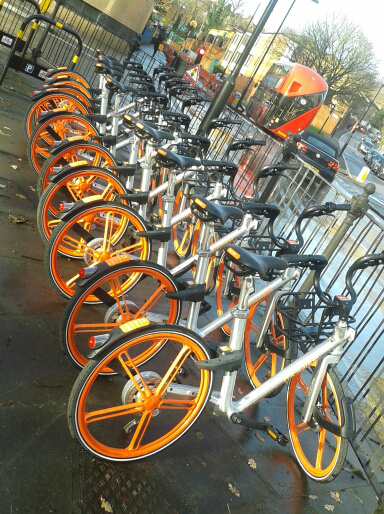 Saw this at the top of Holloway Road. I'm not sure this is an official docking space. Ofo. There's an opinion piece about the issue, and bemoaning the lot of the pedestrian in today's paper - https://www.theguardian.com/commentisfree/2018/feb/27/pavements-ped...

Actually, it's just moaning, but it is the Guardian.

Crouch End may get to see the pavements widen through the Liveable Neighbourhoods Initiative just in time to have the new space occupied by hire bikes.

I should really stick this reply under the post on the Liveable Neighborhoods thing, but for some reason it's lacking a 'reply' box...

The City Metrics people had a look at the Mini Hollands yesterday, and pronounced them just fine, though a slight bias is creeping in, I quote,

"problems for delivery drivers... [were] ... addressed last year with the launch of a cargo-bike delivery service"

It mentions that the target for Enfield is a fourfold increase in cycle use. I had a look at the data for Crouch End - at the moment cycles comprise 3-6% of traffic on the Broadway, however that's per vehicle and if you look at the per capita figure (ie. how many people are being transported) it goes down to an average of about 1.8%.

A fourfold increase would bring that up to 7%. Would we notice a decrease in motor traffic if it still comprised 93% of transport of choice?

Just in case anyone blows their sprocket at this - yes, I'm in favour of cycling and cycle lanes and would dearly love to reduce traffic. I'm just allergic to over-claiming, exaggeration, poor reasoning and confirmation bias. If the claim is "we're putting in cycle lanes even though we know it doesn't always work because we feel on balance it's a good thing", then I'm with you.

James Cracknell the author of the CityMetric piece, suffers from a sense of humour, which is sometimes a little difficult to follow. I sympathise, as my own attempts to address serious questions are often affected by lurches along a jovio-morose spectrum. The City Metrics piece seems to be a serious attempt , but it does end with the summary "time will tell whether it proves value for money" which is more than a bit of a cop out.

In terms of value for money, I'd proffer the suggestion that £50 / 60 / 70 billion to be spent on HS2 would be better spent , on a small island, on small projects, such as cycle lanes, bus routes, footpaths and as yet undreamed of city centre improvements, to enable the many of us who travel many small distances many times each week to do so more efficiently.

The cargo bike company which addresses the delivery driver problem is called ZED for Zero Emissions Delivery and claims to be "using cargo bikes and electric vans". The electricity generation could perhaps be 'zero emissions' once you write off the environmental cost of building wind or solar power stations. But the cargo bike will be powered by a cyclist who will inhale oxygen and exhale carbon dioxide. So ZED is just a plain straightforward lie.  The Pacific Institute has published an analysis of comparative greenhouse gas emissions (GHG)  for driving and walking. The greater GHG number depends on whether the walker is a vegan or Ron Swanson. When faced with a salad Ron says ' you've accidentally given me the food my food eats'. Which I guess is confirmation bias - I've searched the internet and found exactly what I want to reinforce my prejudice.

The absence of the reply box might be caused by a Javascript issue. Ning suggested that the cure might be a hard refresh "To hard refresh on a Mac, press the Shift, Command, and 'R' keys simultaneously in Firefox or Chrome. On a PC, press Ctrl and F5 at the same time. You may need to do this a few times, but that will usually resolve the issue."