Featuring now on a website near you, an application for a four screen cinema in Crouch End. The show has already started - you can be a bit player by leaving your comment here.

This image shows how the new building (red) will replace the old (green) and is composed from the sunlight study in the application. 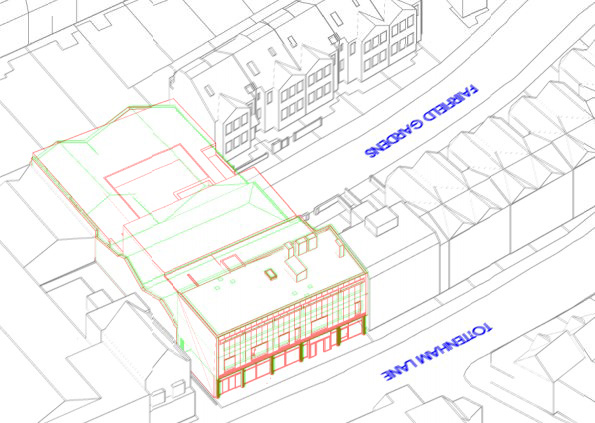 The consulation [sic] comments seem to be roughly evenly split. Many respondents support the plan, thinking that a cinema will make the town centre a more interesting, attractive place, while the other half object, wondering about the car parking and the building project.

For myself, I think  the current building is so ugly and apparently useless that almost anything would be an improvement. And its rather nostalgic to have a cinema again on the site - the first building there was a cinema as the area was developed in the early 20th Century. Double click on the site map in this link to see how the the old Lightcliffe House site developed

I welcome the news that we're getting a cinema in Crouch End, but frankly the new Art House cinema in the old Music Palace is all we need. I don't think Crouch End can sustain 2 cinemas, especially when one of them is a 4 screener. Parking is an issue, as is noise for nearby homes.

I agree. It seems to me  from reading the comments on the planning application that some people are confusing this with the Arthouse project. 4 screens and multiple programme times during the day at Picturehouse is a very different thing indeed and parking would be a real issue.

Whether CE needs it or not I'd leave up to the cinema  company - if ti fails they bear the brunt, and a barely used cinema will hardly be worse than the current building. As I understand there will be no clash of programmes with the Arthouse - they will show different films.

I've looked a few times recently at what is showing in Muswell Hill, Wood Green and on Holloway Road. Pretty much the same at all places. I guess the 4 screener will have the same films again. So, instead of taking the bus to Wood Green, I will just walk round the corner to see whatever it is. This does nothing to add to car parking problems. I think many other potential clients will be in the same situation.

I'd love to think that this would be the case, for the majority of customers, but I think to sustain several shows a day on multiple screens the cinema would have to target customers outside of Crouch End who would possibly drive.

If the ArtHouse site hadn't already been approved I might feel differently. I think that that project seems very appropriate for Crouch End and is of course set up by locals who already have strong links to and understanding of the local cultural community.

I'd love to see some creative redevelopment of the site compared to the eyesore it is now, but I'm not sure this is it, just in my opinion.