OpinioN8 had a place on the Liveable Crouch End Stakeholder forum. The exact proceedings of this forum are now fading a little with the passage of time. My notes suggest the last one took place in April, but we've not had the minutes from it yet. Which is a shame, because the first one was well attended , carefully minuted and with action points to be followed up. Obviously without the minutes and the follow up notes we, the Stakeholders , will not get the answers we were hoping for.

The (really quite well confirmed) whisper is that the timetable has been changed. There was a plan to put out information for public review over the summer, to look at the feedback and then to go to Transport for London for approval for the next stage. This has been revised so that approval for the next stage gets approval before the public get to see what it is that is being approved. I find this rather regrettable. Every such decision that takes place behind closed doors just shuts off an opportunity for the "beneficiaries" of the proposed scheme to have a say on the likely benefits. The guardians of this scheme will decide for us what it is we want and need.

The detail of the Facebook posts cannot be taken seriously. A few of the contributors have understood the process and the proposals in so far as they have been made public, but by and large the comments are poorly informed and not always completely rational. But several conversations have happened which at least indicates a bit of a dent in the apathy.

I know of one public meeting so far, where a bit of agitation has arisen. This was organised by the Glasslyn, Montenotte and Tivoli Roads Residents' Association, it took place in Highgate Wood School and one of the deputy heads of the school attended. This is, broadly, a good thing. The school itself is outside the Liveable Crouch End area, but at least two of the major routes used by anyone going to the school are in the area. The W5 stop on Shepherd's Hill is busy twice a day with numerous pupils, and it is here that buses going on trips park to pick up and set down. The footpaths to the school from Park Road are also very busy. So the involvement of the school covers what might otherwise have been a gap in the scheme.

This picture is taken from the website of Landor a company which recently organised a Liveable Neighbourhoods Conference in Alexandra Palace. Isn't that lovely 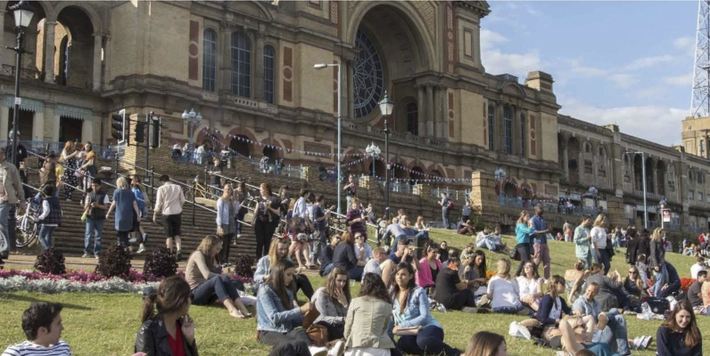 Adrian, Thanks for all  this information, and I hope your post brings some answers on your excellent site. As you say, if the meeting was "well attended , carefully minuted and with action points to be followed up. ... obviously without the minutes and the follow up notes we, the Stakeholders , will not get the answers we were hoping for."

Perhaps the Crouch End Neighbourhood Forum could begin setting an example? It may be just my extreme anti-pop-up-defended browser, but I cannot find on their complex website a link to their, um, minutes apart from the inaugural meeting - only a jokey picture of some edwardian boy scouts. A bit frustrating finding about the proceedings of a body which must demonstrate engament with the community as above ... but perhaps you could point me in the right direction?

https://www.crouchendforum.org.uk/cenf-minutes-of-meetings/ last updated in February 2019 so it must be done again

The committee members appear to be listed in the last set of minutes in attendance and non attendance. Perhaps one of elected committee members will take responsibility for posting the minutes plus the briefings that are presented by the committee members.   Otherwise the neighbourhood forum will continue the past tradition of excuses that were lamely expounded for the HTH Trust minutes which were either stuck on a computer, lost, or had a muddle of part 1 and part 2 information and could not be shared with local residents and traders!   I mention briefings because minutes these days say very little.  Stating an item was discussed does not help the general public understand the decision making unless those facts or realities are placed in the public domain for all to see.  Many will argue, it's a waste of time or nobody will read them, but some will and if they see a problem you will get to hear about it.  As a consequence represent more effectively.

On the other hand perhaps the voluntary commitment is to meet once quarter and nothing happens in the meantime.

Minutes are often very brief . Does the blog give a greater insight into the sort of discussions the committee is having . The blog is interactive so it enables feedback of precisely this sort or perhaps more relevant to particular tissues

There are a multitude of ways to communicate with different groups and parts of the community.  Which is great especially when communication like this occurs because different age groups use different media due to personal preference or limited knowledge.  Some hate facebook, some love it and so on.

Which blog on which media site? I found lists of consultation comments on a site but most people do not have the time to read the many consultations comments, stating a particular stretch of road needs cleaning or blocking off. Both are valid local issues but from a broad community engagement perspective you only need to read the suggestion once and if needs be put (15 or whatever number) in brackets to indicate how many people said the same thing. My preference is to read something fair, informative, not the same words being repeating, and to the point.  If something has peaked my interest delve further with links or directions  supplied as to where to go for further information.