"It does not feel right" - Highgate Councillor

As a killer quote it doesn't amount to much, but increasingly, things don't feel right. Clive Carter was commenting on a series of lunches, dinners and appointments involving elected members of the London Borough of Haringey. But he is right. It does not feel right. We have no evidence of actual wrongdoing, but, by golly , we have our instincts.

And then we have the advertisement by the Hornsey Town Hall Creative Trust for new Trustees. That too does not feel right. They actively boast about their inability to speak to the community they claim to represent. And somehow, somewhy they propose perpetuating themselves when, if all we are led to believe is true, they have served their purpose. If the Far East Consortium (FEC) of Mr Chiu (and his hotelier Dorsett Hospitality and their UK representatives CoPlan Ltd) are putting £27m into the refurbishment of the Hall , then we no longer need an "independent buildings preservation trust". So by renewing themselves, a process over which they, and only they, have control, they presumably have their eye on some future goal.

Perhaps they are setting themselves up as the community representatives foretold in the Haringey People press release.

"The developer (FEC and Coplan Estates) will set up a steering group when the refurbished town hall building opens, which will include local residents and community groups and will actively engage with the local community on the refurbishment plan of the Town Hall."  Perhaps the comunity might think that does not feel right, either.

And what of the promises of the money and the refurb. The words used have not changed over months. Page 11 of the December / January Haringey People repeats last September's news of the FEC offer. Still it is only a proposal, still the hotel will only 'help to cover the extensive running costs', still the public consultation on what is to be done will begin only after the hotel is open. It still doesn't feel right, not like a good offer should.

And as for those extensive running costs, I don't believe them. They are repeatedly stated as "It costs 350 grand just to keep the doors open" - I was a bit slow on the uptake with my first FoI request for the running costs, I should have asked for the income as well, which I have now done. The answer is due on 21st December. It'll probably be "can't tell you" but that won't stop me believing that 74 businesses each paying £100 per week is , broadly speaking, 350 grand per annum. So, it does not feel right to say the cost of keeping the doors open is 350grand. I reckon its more like nil, or better.

And our expectations of what the 'improvements' might be to the Town Hall Square. Step 1 is to make it a park, and therefore much more expensive to hold an event in. Step 2 will be to sell it to a private tenant, Shevlock Ltd. Perhaps that wan't perfectly plain. Haringey's lease for the Town Hall and Square will not be with the consortium that bid but with a specially created company, the sole shareholder of which is Shevlock Ltd, a company registered in the British Virgin Islands. It doesn't sound right does it. Step 3 will be to remove control of what goes on there altogether and take it out of the hands of the community. Cllr Arthur recently wrote, in wha has become a widely circulated email, unbidden and unasked

"As an early heads up, from next year onwards the Council will be working in partnership with FEC and CoPlan to fund and provide the Christmas Tree and lights for the square, . . . . ."

so community involvement removed, at a stroke. It doesn't feel right , does it?

I find the phrase, Labour's future is safe … to be remarkable, coming as it does from Mr. Peter Bingle.

It’s not merely that it comes from a former Conservative Councillor, whose opinions as a friend to the Labour Party may not be entirely reliable. It's also because Mr. Bingle was an ardent admirer and supporter of Mrs. Thatcher and is a current fan of Donald Trump.

Mr. Bingle suggests that [local] Labour's future in the hands of the current Council Leader, Cllr. Kober, is safe.

However, in recent days I've been thinking more about the epithet Red Tory.

Ordinary Labour Party members must be wondering how a man of Mr Bingle’s politics can be so friendly towards a Labour Council. Let alone, to employ their Labour Group’s Chief Whip (i.e. Cllr. Jogee, a Consultant for Terrapin).

Sorry if this sounds like a Momentum moment, I'm actually a Liberal Democrat Councillor.

Bingle is very selective in his compliments for Labour councils. He heaps praise on the 'radical' ones that are 'transforming their communities', like Haringey and Southwark:

Yes. On the basis of his numerous tweets, Mr. Bingle has in been remarkably rude about the Labour Party in general. I suppose the inference is, that if the Boroughs of Haringey and Southwark were functionally equivalent to Conservative administrations, then Mr. Bingle would have no reason to complain about them.

The reform was proposed and carried through by a Labour Party MEP.

Sauce for the goose, etc.?

Mark, thanks for the heads up on that: I've tweeted that link here.

THE following contribution was posted elsewhere by a former Labour Councillor having 16 years’ experience on Haringey Council.

While I don't necessarily endorse everything Alan Stanton says, I thought opinionN8’ers might wish to see the opinions of a Councillor with such experience, on a matter of the greatest significance to the finances of our Council and the future of our Borough. Reproduced with the kind permission of Dr. Stanton: 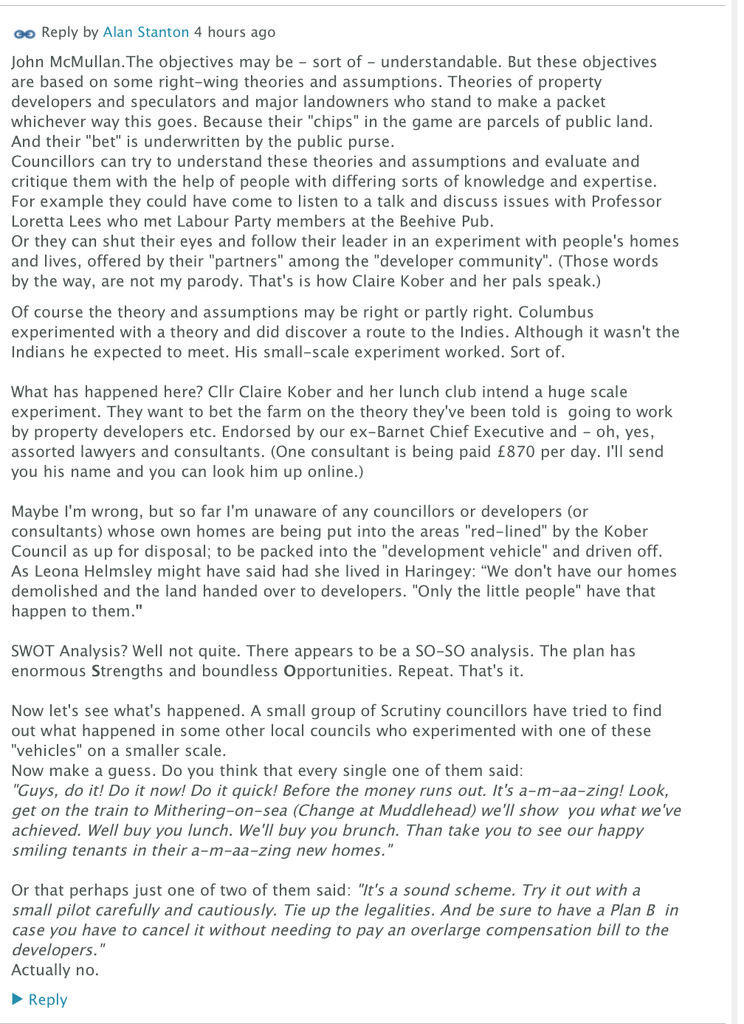