THE scale of the Council’s proposed demolitions is revealed in this official Council map. Below (in orange) it shows the demolitions proposed of their own properties. These may amount to tens of millions of pounds worth of land and buildings; yet the Council has been persuaded that the Northumberland Park Estate has a large negative value (!) possibly as much as minus £15 million. (You couldn't make it up.)

(a possible explanation is that during multiple visits by New Labour Cabinet Members to MiPiM at Cannes, too much wine was consumed. Too much also, at lunches hosted by bon vivant Peter Bingle of Terrapin Communications, PR firm to Lendlease and other developers. I wasn't there and it's possible that there was no libation.)

Then of course there are the properties in red, below.

These are currently in private ownership, that may become subject of "acquisition": one way or another. In order to minimise cost to the HDV, subterfuge may be used. The obvious, brutal way would be to command a sale from an unwilling seller by a Compulsory Purchase Order and the resident's home would then be demolished. The value of these properties is hard to judge. These ones couldn't have a negative value. The Council would attempt to purchase them at below market price (presumably, again, at a cost of tens of millions). 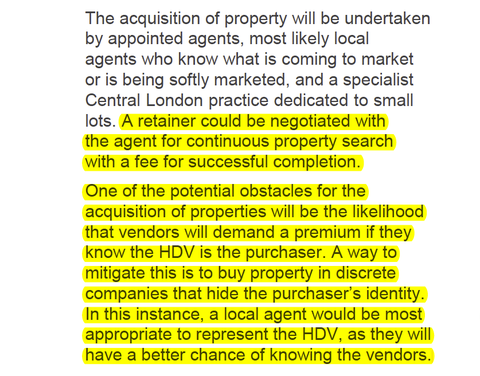 However, according to Local Government papers,* the HDV may attempt to arrange these purchases through local agents, in order to conceal their identity (and purpose of the buyer). Clearly the New Labour Council doesn't want to pay any more than it has to, for people's own homes, that they intend to demolish.

The "partner" (LendLease) couldn't get their hands on this much land, other than by working through such an arrangement—and with such a relatively feeble partner—and still less, use attractive Compulsory Purchase Orders—to which they otherwise would have no access.

Does the football club (that big oval, lower left) need some more room to the east? Presently, there's a large school in the way.

The list below is abstracted from the jumbled-up table of Northumberland Park Third Party Titles in the Category 1 Development Portfolio, in the Council's published papers. This is the minimum number of properties so described; the total below shows 410, but there's probably about 25 more not noted here. Spreadsheet analysis continues; the information provided isn't always clear. Some properties appear not necessarily proposed for demolition (compare with map above) but their fate is unclear:

#HDV | PDF plan of area at risk from demolition, with much improved definition (attached)