#Haringey Council leadership: is the writing on the wall? A RECENT vote on a Motion within the ruling Labour Group on Haringey Council suggests the writing is on the wall for the current leadership.

THE Motion concerns the totemic issue of the future of Wards Corner, above Seven Sisters Underground station and home to London's Latin American community. For more than 10 years—mainly under New Labour leader Claire Kober—the council's policy has been one of demolition and developer re-build. From May 2018, under the radical new Momentum-leadership of Joseph Ejiofor, the direction of the UK's 1st Corbyn Council is … to continue the policy unchanged.

The scheme involves pushing out the Latin traders across the road to a temporary marketplace. Then, after construction were completed, the traders would be invited back into a shiny new building (new Terms & Conditions). The way the council's press/public relations machine spins it—and in theory—it all sounds just dandy.

However, not all traders would move to a transitory facility across the road, to the side with far less foot-fall (and custom). Those traders who did, might well not last the two or more years while a demolition and a rebuild took place. And those remaining might not wish or be able to go to slick new premises, of a wholly different character. And eventually, facing market rents.

Increasing land values (with the knock-on effect on rents) is an explicit council “regeneration” policy.

The new-build that is proposed would be soulless and anodyne. It would be a standard commercial property, that would never be written about in En Route, Air Canada's in-flight magazine, as the current market has. It is the current market and it's unique character that has attracted the attention of the national and international press and even of the United Nations.

BLAND and anonymous. An adequate building for a Business Park, but much the same styling as at 101 other locations. The "Gateway to Tottenham" is mere marketing flannel. The municipal Planning Department has proposed "memory boxes" to display some momentoes of the former corner site.

MANY or most of the small businesses would not survive this process, or necessarily want to. The council does not aim to break-up the Latin American community. Privately however, they would see dispersal as an unintended but inevitable consequence. They understand—just as with the notorious HDV—that not everyone would return and view the scattering of a culture and community as a price worth paying.

The council treats the site as a piece of valuable real estate and give insufficient weight to a premises that function much as a community centre. The guarantees given to the traders are as misleading and meaningless as the HDV's Right of Return. The current council leader has repeatedly issued empty, worthless warm-words.

The Motion at the Labour Group meeting 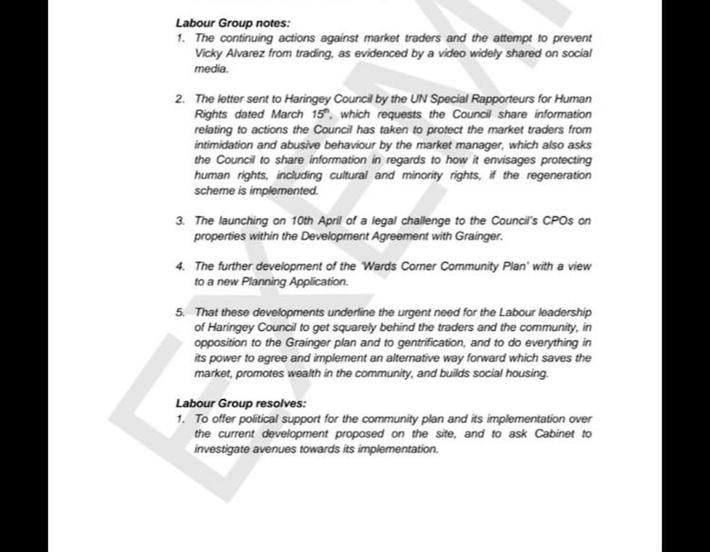 IT IS against this background that the above Motion (leaked) was recently put to Labour Group. We do not know exactly how Members voted but one can hazard guesses. Some transparency from the governing Group would be a fine thing. (NB. if anyone familiar with the matter cares to contact me, I would happily add information or correct a mistake).

67%  – two-thirds – of the Ruling Group voted in Favour of the Motion. Just to recap, the Motion is directly at odds with the current, official policy of the Cabinet and Council.

19% abstained – Most or all of these abstentions are likely to be from within the Cabinet itself. Thus, seven Members found that, in all conscience, they could not vote Against the Motion. If they were Cabinet Members (as seems likely) and had voted For the Motion—and against current Cabinet policy—then they would be inviting their own sacking by the current leader, who in the last 10 months has already sacked several Cabinet Members. We can therefore surmise that some of these abstentions may be closet supporters of the Motion (N.B. a sacking from Cabinet means a drop in Allowances of c. £25k p.a.).

Perhaps most remarkable, is that amongst the above list of The Usual Suspects, three did not vote against the Motion.

AS the Labour Group does not publish how its Members voted, one is left to speculate. Thus, the overwhelming majority of the ruling group is opposed to current official policy of the council, cabinet and of the current leader. The vote may be viewed as a proxy for (lack of) confidence in the leader and demolition advocate.

Two-thirds (plus) against the official policy is a gauge of Majority Group opinion that is significantly worse for Ejiofor than similar votes over the HDV were for Kober.

Following the scathing report of the council's quasi-independent Overview and Scrutiny Committee about Wards Corner, the leader flaunted his disregard, via a careless and misleading letter to The Independent, evidence surely, of a closed mind and lack of interest in good governance. Cllr Ejiofor made no mention of the (restorative) Community Plan: 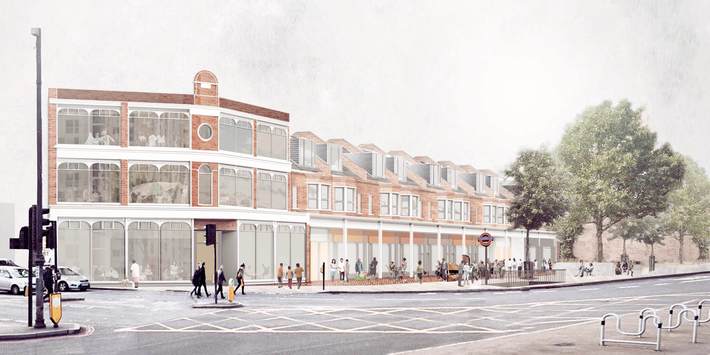 THE latest version of the community-endorsed, Community Plan, an earlier version of which was granted Planning Permission. The“Wards” Edwardian department store, on the left above, is restored and conserved.

* At meetings of the Cabinet, the former Chief Whip's reflexive agreement with the leader is something to behold. The gap—between (a) the Leader asking his colleagues, “Are we all agreed?” and (b) the Whip saying "Agreed"—is so short as to be unable to be measured by current timing technology. Indeed, there may be overlap between the two speakers' sentences. Cllr Bull may aim to coincide his "Agreed" with his leader's "Agreed".