According to new budget proposals discussed at the last Haringey Cabinet meeting, the free weekly collection of green waste is to end from April 2017.  Instead you will need to opt-in for green waste collection, for which there will be an annual fee of £75. No doubt the Council will tell us the details when we receive our council tax demand for next year.

On council tax, the proposal is to freeze it, but there will be a 3% surcharge to pay for for adult social care.

It'll take me ages to get all those prunings in the black rubbish bin. Or maybe I could have some bonfires.

I think I lose my discounted parking vouchers as well. 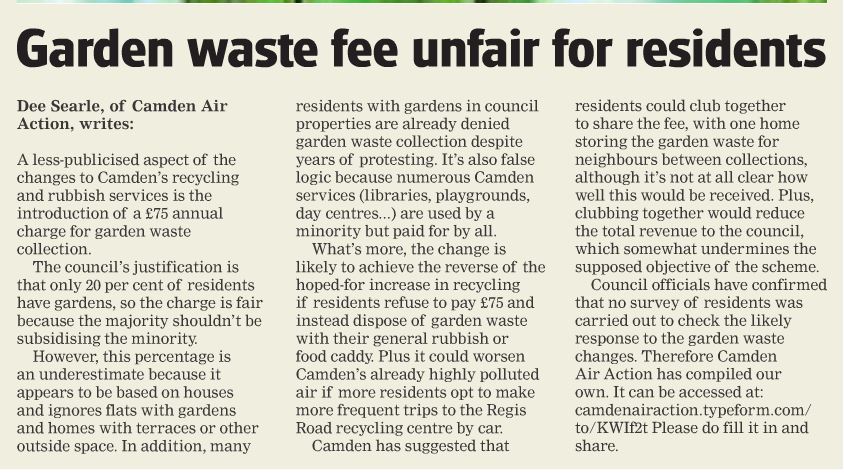 I bet it cost more to manage this new idiotic policy!

Has this happened. There is no reference to it on the website. Have we had a council tax demand yet this year?

No, it hasn't happened yet. Having agreed the policy it appears they are now trying to puzzle out how to implement it. How will Veolia distinguish between those who have opted in and out? There's talk of yet another wheelie bin being provided but many homes just don't have space for it. Perhaps the whole idea will be dropped.

I've received my council tax demand - you should have received yours by now.

Good point Rob. My place (a conversion) has a garden divided into two. If one flat opts in, and the other opts out, how do the binmen identify the individual blades of grass left in the white bags?

Maybe barcoding the plants is the answer.

No, no, barcoding would be far too complicated. Just register the DNA of every plant in your garden on the Council website, and a simple lab test will check the contents of your bin.

Well my garden waste wasn't collected this week. Has the policy been implemented?

Mine was collected, and the rest of my street (Fairfield Road). So that's a definite don't know.

This came up at Scrutiny on Monday 16th. The petitioner (1,432 signtories) spoke very near the beginning of the meeting, far too succinctly for someone at a meeting with politicians. Cllr Ahmet replied from 16:46.

She denied that fly tipping would increase because of the new charges.

She analysed other boroughs costs quite extensively and justified  the proposed changes. She pointed out that there is no statutory requirement to collect garden waste. Being a politician she employed a lot of red herrings and half truths. In summary she thinks the changes are well thought through and appropriate, with an appeal to austerity, and a rather pathetic reference to children's libraries.

Some questions and answers:

Fortnightly collection of garden waste would not produce enough savings

Cllr Connor asked about the true cost of using hessian sacks - the officer answered that the cost of tagging the sacks would almost wipe out the savings; and that bio-degradable sacks are much easier to handle.

Cllr Ibrahim - health and safety question on using the hessian sacks which wasn't a question.

Cllr Brabazon - will this generate enough income - how do the sums stack up - what happens if they don't stack up - is there a plan B in place. Answer from Cllr Ahmet - we consulted cllrs, so this is your fault, we know what we are talking about so there.

Chairman Wright - environment scrutiny will keep an eye on this for 6 months and beyond. Thanks and goodbye.

I have a need for garden waste collection. I don't have the mobility to take it myself to the Council dump. So it seems I have no option but to pay. I'd feel a lot better about this if I thought the savings would be ploughed back into community care but I doubt it somehow. Any savings will be consumed by the mighty maw of Haringey Council.

Just to be clear for those unfamiliar with Dim-mockracy in Haringey Council, the petitioner was given three minutes.
Then we heard in response that There Is No Alternative. The gods of Austerity demand "savings". And  what the gods dispose; no one may oppose. So there is no plan B. Just a carefully thought-through Plan A. It it doesn't work then we'll need yet more cuts - to summarise Cllr Peray Ahmet.
Or as Doctors once advised, 'bleed the patient, bring more leeches.'

Cllr Charles Wright the Scrutiny Committee chair then curtailed further discussion. "I don't want to spend too much time on this", he announced.

I have to confess that I couldn't bring myself to sit and watch the rest of the meeting online as it wended through the agenda. Maybe that's unfair of me, because it suddenly got a lot better? But what I saw was enormously dispiriting.
However, sceptics like me could be wrong and the Council "leadership" may turn out to be correct. Not that recycling and the cleanliness of our streets will get better. But perhaps even in Haringey, sometime fly-tipping capital of England, things might not get very much worse. The piles and pyramids of dumped rubbish & litter may grow no larger. Dumped mattresses no more numerous. Similar quantities of cans and bottles will wedge themselves behind phone cabinets, or roll into the corners of parks and down back alleyways.

Whatever happens, we can remain confident that the Dear Leader's Comms Team will continue to celebrate Haringey's success story. In Haringey People Magazine, and tweets and leaflets they will inform us of this truth not as yet universally acknowledged. Perhaps decorated with lively photos, and proved by tables of percentages of unknown numbers. And if on our 'journey' we aren't quite 'in the place we'd wish to be', then artists will be hired to photoshop what it will look like when we eventually arrive at this happy destination.

During the meeting the question was raised - as usual - about what should be cut if not the waste collection? The obvious answers continue to be wilfully ignored. They include the ever-growing array of vanity projects. The overstuffed Degeneration team and their accompanying expensive choruses of lawyers and consultants. And of course there's the Comms team. Many of whose staff could be re-employed in actually useful tasks.
Including waste management.