Arch-Daily (Britain's most visited architecture site) has produced a selection of films where interiors play an important role.

Maybe choosing to watch these would only make lockdown worse.

7 Movies in Which the Interiors Take on the Leading Role 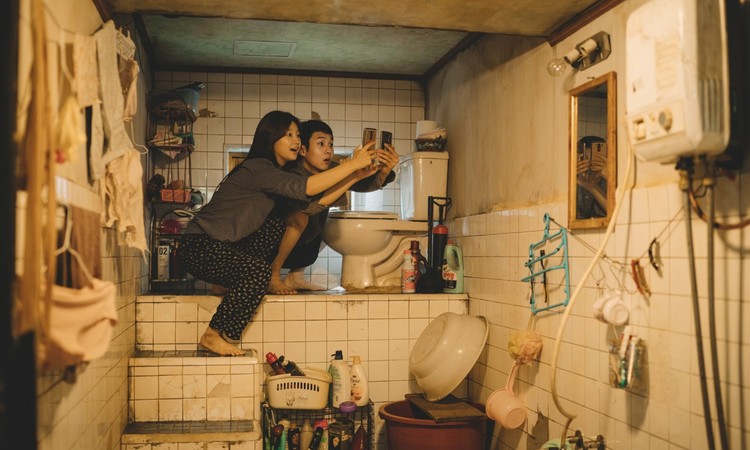 The recent success of Parasite, the award winning film directed by South Korean director Bong Joon Ho, has created a conversation around the emphasis of architecture and interior spaces in movies. This particular film does an excellent job of blurring the boundaries between the two disciplinary fields, to the point where the architecture is not just the background of the set, but it has been placed at the forefront of the storyline, and takes on the leading role in many scenes.

However, Parasite is not the only movie to use architecture to help illustrate its plot, as many other cinematographic works have already done that with similar success. Below, we've compiled seven movies in which the interiors, and not the characters, become the focus of several scenes. 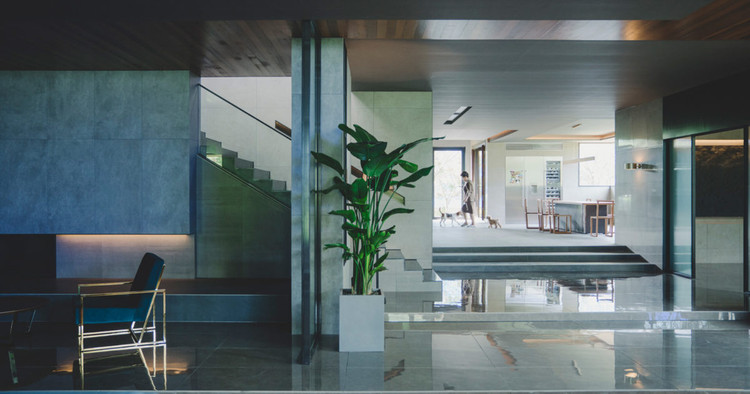 After winning four Oscars, Parasite reaffirms the strong existing relation between the movies, art and architecture, making its scenarios to become the focus of the discussion in specialized means of both disciplines. The opulent house of the Park family, with its refined materials, minimalist furniture, austere atmosphere, and wide garden is opposed to the dark image of the Kim’s house, a half buried eroded den, with only a single window on the street level.

Throughout the film, an intricate relationship created among the characters throws light on the socioeconomic problematic of Korea, and of globalized capitalism, as the architecture of the two homes becomes the main device for telling several metaphors of the plot. The turning point of the narrative occurs  when a new space of the house, an underground bunker of some kind, is discovered. 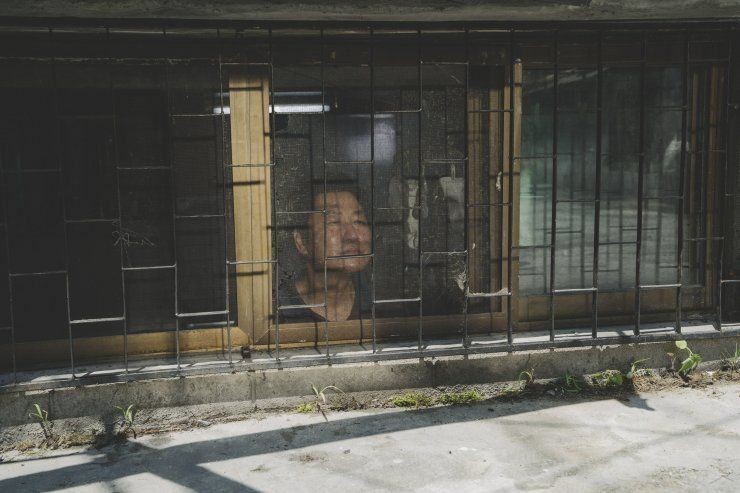 Kim's house window in "Parasite". Screenshot of the film

Birdman or (The Unexpected Virtue of Ignorance) 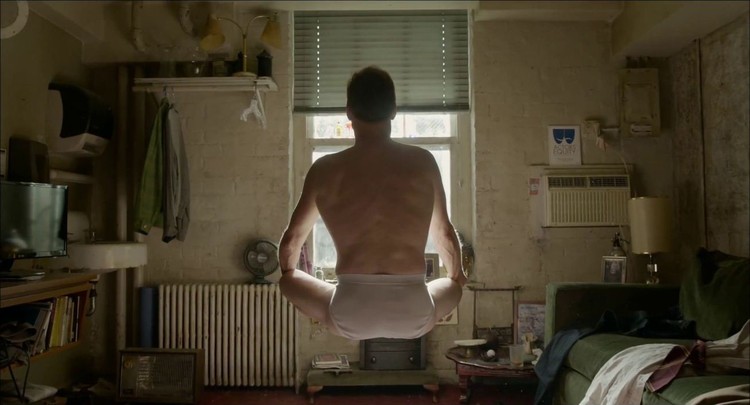 Another Oscar-winner, Birdman is an interiors-focused movie. Filmed in a manner to look like as if it was filmed in a single shot, the story takes place almost exclusively inside a theater, a business directed by the protagonist, Riggan. An actor that in the past successfully played a superhero, he seeks to gain recognition reconquering the public and the critics, but he ends up in a vortex of mental confusion emphasized by the camera movements and his interactions with other characters. As the film progresses, he becomes increasingly closer to the madness, and mental mazes blend and reflect themselves on the theater mazes, which spaces become more narrow, tight and claustrophobic. 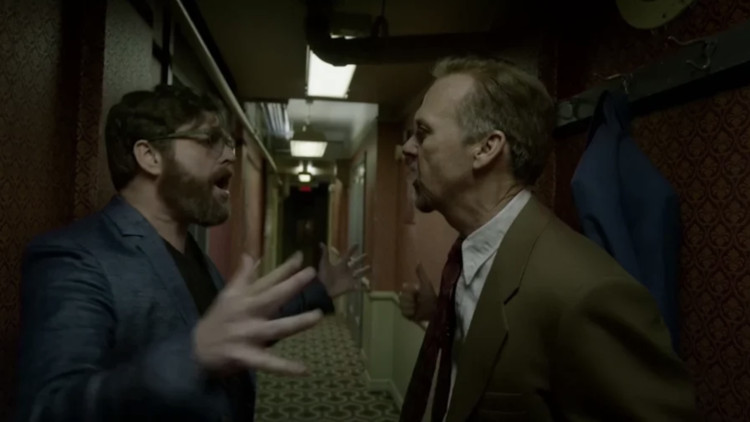 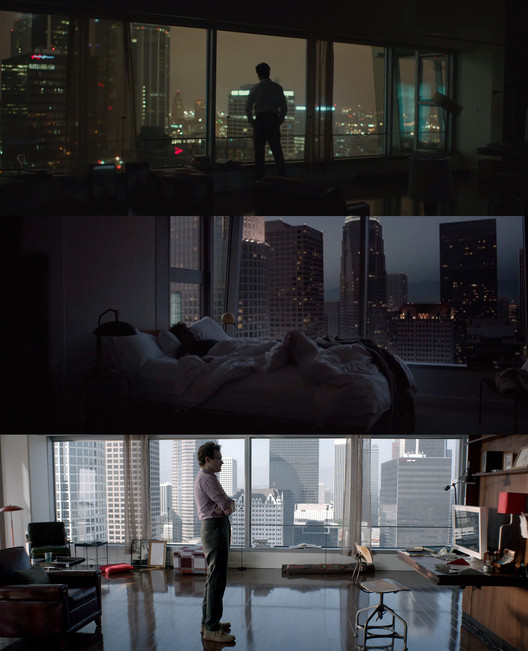 Theodore's apartment in "Her". Screenshot

Her takes place in a near future, when the protagonist Theodore Twombly falls in love with Samantha, an artificial intelligence system personified by a female voice. Completely different from other science-fiction films that are based on objects and design elements to characterize the future, Her is a film that describes emotions and atmospheres – and tells the story through materials that appear throughout the movie.

Theodore’s apartment reflects the state of mind of the character, a man who is recently divorced, depressed, Theodore seems to see in that space a temporary place, not even bothering in unpacking part of his belongings. The hues of the movie also contribute to create a specific atmosphere as the materials and the lighting emit red and orange tones, creating a pleasant and warm environment around the character. 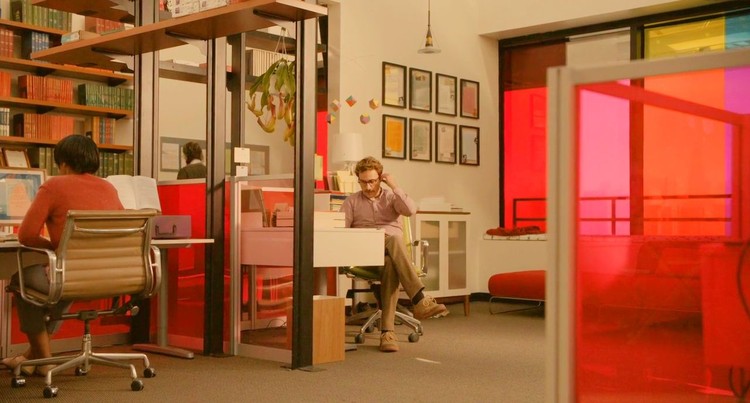 Theodore's office in "Her". Screenshot 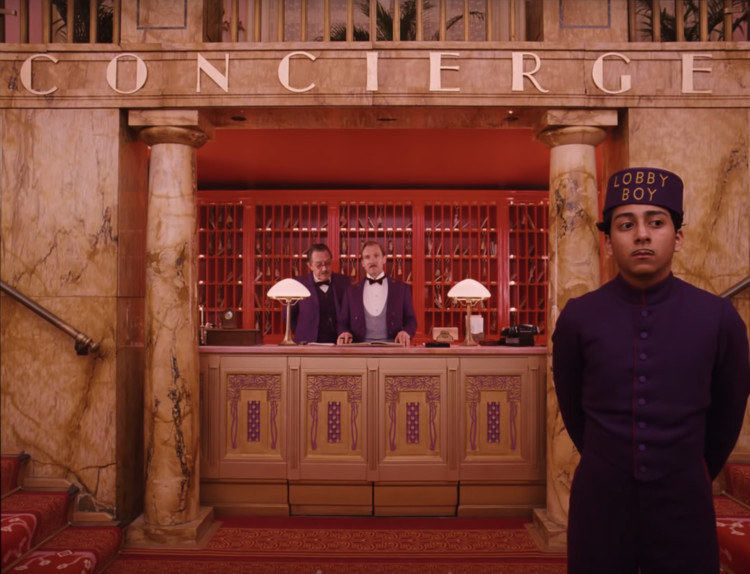 The Wes Anderson movies usually please the architects and photographers showing perfectly symmetric compositions and spaces that seem to merge past and present, reality and fantasy. The Grand Budapest Hotel is not different and its exuberant interiors are full of textures and saturated colors contribute to give the film the typical surreal aspect of Anderson's other productions. 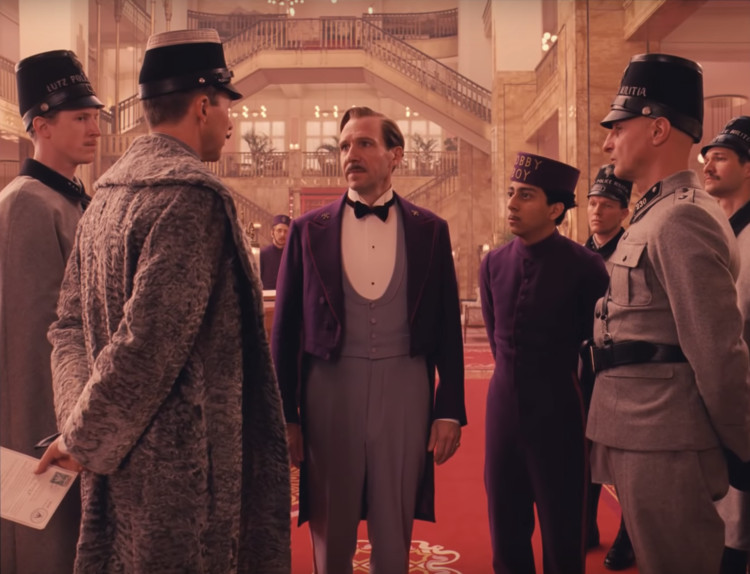 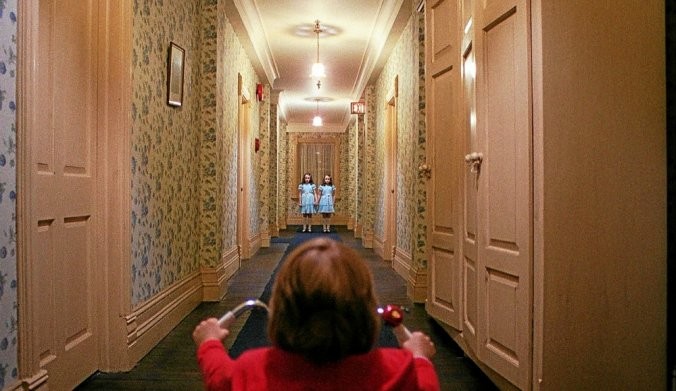 Hall of "The Shining". Screenshot

Similar to Birdman, the interiors of The Shining progressively become more and more labyrinthine, as the madness takes over the mind of Jack Torrance, the main protagonist of the film. Isolated from the world in a remote hotel that remains closed to the public for most of the year, Jack’s mental fragility leads him to hallucinate situations, people, and imaginary places, and ultimately drives him to kill his his wife and son – the only other people in the remote location. The end of the film places Jack in a hedge maze, a literal and psychological representation of what the family has endured throughout the film. Exhausted after chasing his son outside, Jack dies frozen in a cold winter night. 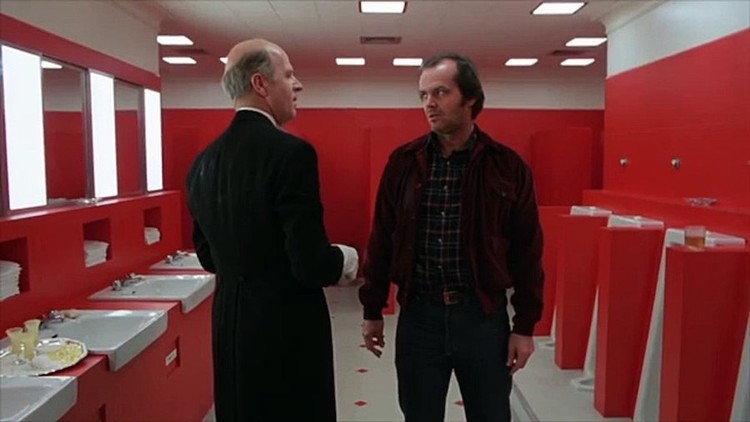 Imaginary spaces fruits of hallucinations from Jack Torrance in "The Shining". Screenshot 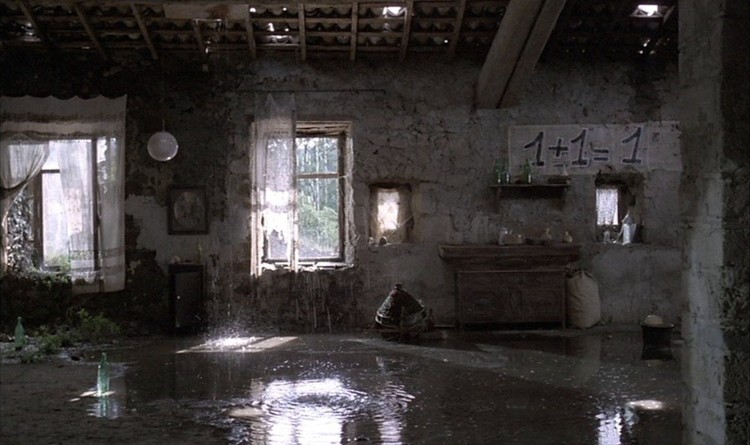 In this film, a Russian poet, Andrei Gorchakov, and his interpreter travel to Italy to research the life of an 18th-century composer. However, during his stay in the Mediterranean nation, the nostalgia of his hometown starts to devastate the mind and emotions of the poet. The slow burn rhythm of the film, also present in other productions of Andrei Tarkovsky, takes over an architecture of damaged and eroded surfaces. It is not hard to seek the phenomenology of a possible interpretation of these interiors marked by the habits of the characters, which reminds the character of how much he misses his hometown. 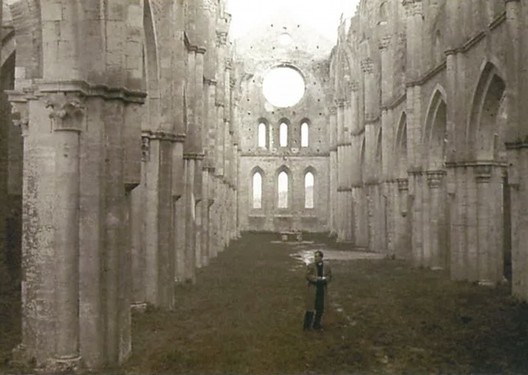 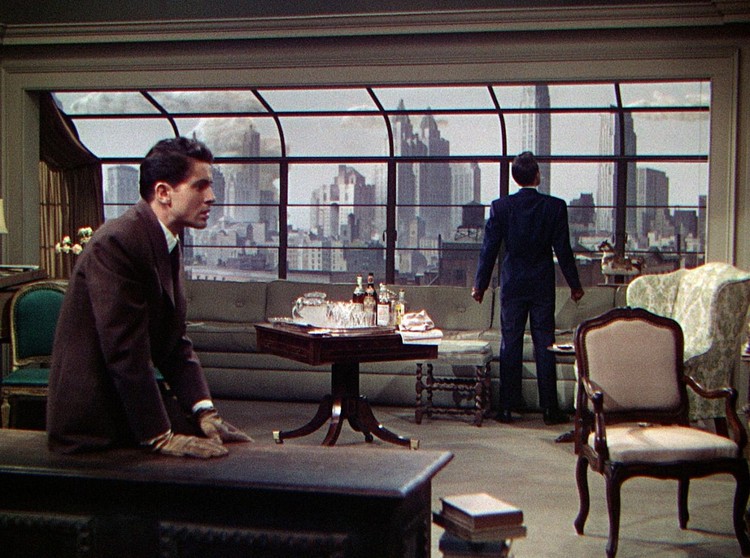 Edited to appear as a single shot with the film cuts made in strategic and “invisible” moments, this Hitchcock masterpiece takes place exclusively inside a penthouse in Manhattan. In the apartment, Brandon Shaw and Philip Morgan kill their college classmate of strangulation and, subsequently, receive guests for a dinner. The tension among the characters rise as far as the students’ teacher, Rupert Cadell, who was invited to the party, disturbs himself with the absence of the third colleague and, after a series of quests, figures out that the body of the victim was, the whole time, inside a great buffet on which the dinner was served. 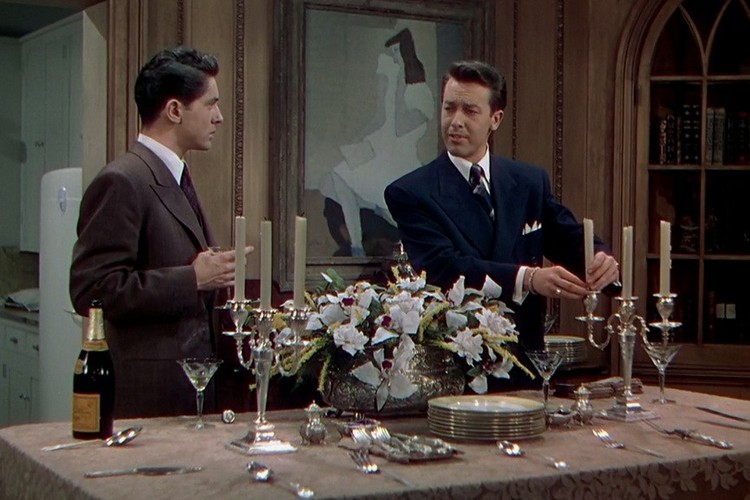 Buffet used to serve the dinner is the same that hides the strangulation victim in “Rope”. Screenshot