A planning application has been submitted to the London Borough of Haringey (LBH) in respect of the Hornsey Town Hall. The entire application can be seen on the Haringey website planning pages under ref HGY/2013/0694 .

The current application also appears complex, for all the reasons given above, and because it is phrased as a series of variations to conditions attached to the original permission.

The essence of it is given in a letter from Keegan's to Haringey and what it seems to be getting at is splitting the 2010 permission into two parts. The original conditions make the residential development contingent upon the Town Hall refurbishment so that there would have been a single monolithic development at the site. The variations now for applied separate the project into two parts:

Very good work in simplifying this down. In some sense it seems innocuous, given that the planning permission will expire and does need renewal. Therefore the splitting into two projects, as you say, with one contingent on the other, tends to suggest that progress will be easier. Once a project has a capital sum behind it, it becomes so much easier to bring in extra funding to allow it to be completed.

In respect of your last question, "Was the original application a single entity for some other good reason which is now being undermined", I would have thought that essentially this was political. The acceptability of such a large development of public land can only be on the basis that any profits are put to local public use, and specifically locally for the CE Town Hall.

There is no necessary reason that the changes will undermine this commitment. However, one would want the local councillors to be on top of this, getting public assurances that this is still the case. It might also be helpful that the commitment be extended to a suitable alternative if any problem with Mountview were to emerge. That should help everyone feel that there is nothing amiss.

Plenty of time for a statement to be ready for the next Neighbourhood Forum.

It may be I have jumped to an erroneous conclusion about the injection of cash - it is possible that this application only serves to preserve the planning permission, and that the only work permitted under it is the preparatory work which constitutes the commencement which is needed to keep the permission alive. If this is so then the works would be carried out by LBH, not by a developer.

But the slippage in the project is clearly reflected in the removal of the  phrase "No works of demolition or development must take place prior to a programme of works being submitted for the agreement and approved in writing by the Council in consultation with English Heritage" from the original conditions, with the explicit intention now of carrying out the demolition of the Mews Site

A word of caution. At the High Court yesterday the tale was told about Wards Corner. In the original planning application the development was contingent on the LatAm market being rehomed in the new development. Prior to being granted, that was subsequently altered to make it easy for the market not be rehomed, saving the developer a small fortune. Guess what - no market now. I haven't read the Hornsey TH applications, but it may be worth someone checking the small print here, Adrian.

I too have now realised what this mumbo-jumbo letter was all about having reviewed the online application and I wouldn't at all be surprised if this is an attempt to guarantee the development of yet more residential living space in the heart of Crouch End at vast profit to the developers. Call me cynical but I bet this was the idea all along. Use the Town Hall as the cloak and then take it off.

So Hugh's note about LBH past performance, and crouchhall's (healthy?) cynicism suggest I may have erroneously jumped to the correct conclusion. If only that were a skill I could rely upon.

If any one else shares these fears please let our Councillors know.

This stuff I dug out in relation to a proposed development in Harringay may (or may not) be of some interest here, Adrian.

I have since spoken to Dave Winskill. I hadn't realised that things have moved on and that the developers of the residential areas (there are only two areas, now - the Mews behind Lloyd's Bank and the car park area at the rear of the hall) are no longer developing the Town Hall itself

I have now objected to this application because, on the one hand, Haringey argue that the land value will be affected (reduced) because of the uncertainty that would arise if the current permission lapses. But, the land value is anyway affected (reduced) because of the uncertainty that arises because we know for absolutely certain sure, that the current permission does not suit Mountview, and that Mountview will make a further planning application.

So, they can't sell the land anyway, especially as they have promised they won't until Mountview move in.

So what game are they playing - silly buggers, as per normal. 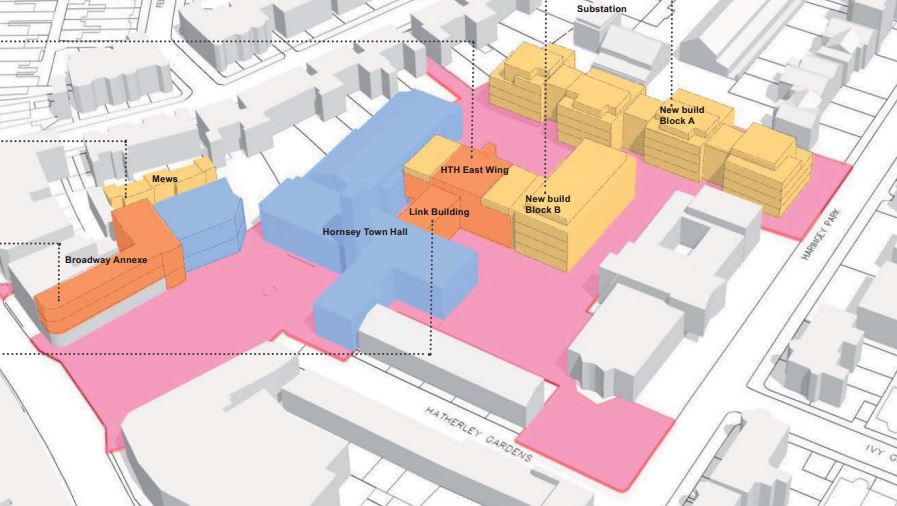