In this vibrant concert drama, composer and jazz musician Roland Perrin spotlights the remarkable life of mobster Meyer Lansky – a key player in the criminal underworld who built an international gambling empire. 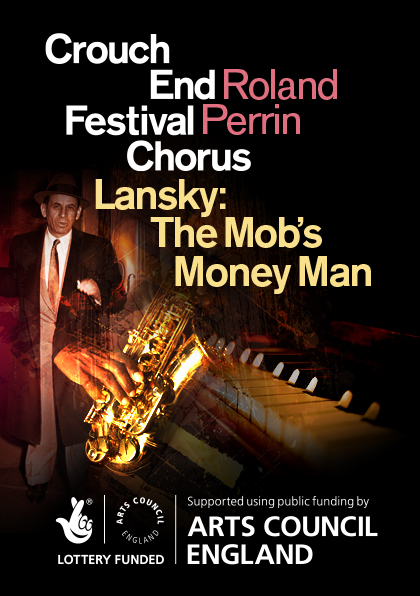 A sell out audience at The Queen Elizabeth Hall gave a rapturous response to the world premier of the CEFC commissioned Roland Perrin’s Lansky: The Mob’s Money Man on Monday night. This epic piece was performed by The Blue Planet Orchestra, jazz singer Rachel Sutton and 150 or so voices from Crouch End Festival Chorus.

As Perrin writes, “The subject of the work is specifically Meyer Lansky and generally the Eastern European Jews who emigrated to New York at the dawn of the twentieth century.. “

It was clear that the evening was going to be special – the ladies in the Chorus wearing pastels while the men stuck with mobster black. The lighting was excellent – supportive of the narrative without dominating or distracting.

Perrin takes us on the journey that Lansky made from anti-Semitic gangs in what is now Belarus in Russia to New York’s Lower East Side, his gradual but eager drift into organised crime, activities in Cuba and other parts of the world and attracting the attention of the Feds as well as President Nixon.

And, musically, what a journey! At the centre is the terrific Blue Planet Orchestra – a dozen or so seasoned jazz men with Perrin himself on piano and accordion, some fine horns and strings and Paul Robinson holding it all together on drums – almost putting conductor David Temple out of a job!

The work was semi-staged which meant several costume changes for Rachel Sutton, whose bluesy voice was perfect for the piece. Her roles included the women in Lansky’s life from grandmother to manicurist. Costumes were generally good but her air hostess was more Thunderbirds than Pan Am.

Musically this was a storm as Perrin moved from klezmer to depression blues and speakeasy bop, with nods to Gershwin and even the tinkle of Glass. Perhaps not enough Cuban dance but more than enough genres to keep any musicologist happy.

There were plenty of wonderfully memorable moments – Jerusalem (Farewell my Grandson) spoke of loss and exile and the desolation of his grandmother. The Chorus worked wonderfully with Rachel to produce a very emotional moment. Two scenes later and perhaps Perrin’s tour de force – On The Lower East Side – breaking the Chorus into four choirs, he managed, musically to create the atmosphere 30s New York - opportunity and thuggery, desperation and creation, bustle and bravado.

And through all this the avuncular narrator (Allan Corduner) sat comfortably in an armchair and, like a Yankee David Kossoff, told the story of a small boy turned bad.

Perhaps this is what is bothering me: the lack of any real moral dimension to this piece.

Lansky existed. He only died in 1983 with the sobriquet “the Mob’s Accountant”. In the US he, as the narrator tells us with some pride, invented what has come to be known as money laundering. He was implicated in the murder of friends and associates, mixed with murderers, clip joint owners, crooked casino operators, extortionists, blackmailers, drug dealers and extremely violent thugs. He made what they did possible by creating the financial infrastructure which allowed them to benefit from the proceeds of their activities while evading prosecution.

It is left to Lansky’s wife Anne to express horror as she realises he is “(probably)” a ruthless killer and then for us, the audience, to witness one of the most bizarre scenes staged anywhere – Anne’s madness as she sings Goodnight my Little Friends while she puts her pet cockroaches to bed.

But other than these references one would be forgiven for thinking that this work was a celebration of someone from a difficult background who had scaled the heights of social acceptability.

I suppose an ocean gives distance but, wonder with me, what the reaction would have been to Ronnie and Reggie - The Musical. Of course they too loved their dear old Gran. The contributions of eastern European Jews to US culture, industry, commerce and life cannot be overstated.  How keen they would be to see Lansky held up as an exemplar?