The impact of this project will be substantial. Roads will be closed, blocked off at one end, segregated cycle paths will be created, new public areas might very well be created at the ends of what become culs-de-sac, parking places will be abolished.

So I find it a bit surprising to find that while all this is going on Haringey is proposing an expensive (£50,000) review of Crouch End's CPZs, with the avowed intention of extending the hours of existing CPZs to all day, and of including streets not currently included. At the same time as the Liveable changes not a sensible proceeding.

This image is taken from the Cabinet papers approving the expenditure of £50,000 on the review. A review in which the outcome seems predetermined.

Personally I find this a bit thick. The current arrangement seems to work quite well. Most residents find somewhere to park most of the time, shoppers find somewhere to park quite often, and workers in our much loved local businesses manage to shunt around from 'A' to 'B' during the working day. There are a few grumbles, perhaps, but by and large we rub by.

Hands off our CPZ, I say.

The rot however, may already be setting in. A CPZ wrong has already been righted thanks to LibDem Councillor Luke Cawley-Harrison. LBH changed the designation of the parking bay outside the Earl Haig from 'Residents Only' to 'Paying guests only'. LBH were discreet about having made the change and many CEA permit holders did not notice until they found the plastic bag with a PCN in it sellotaped to the windscreen. Councillor Luke has negotiated a refund for victims of this injustice, and has had the parking bay restored to its former status. 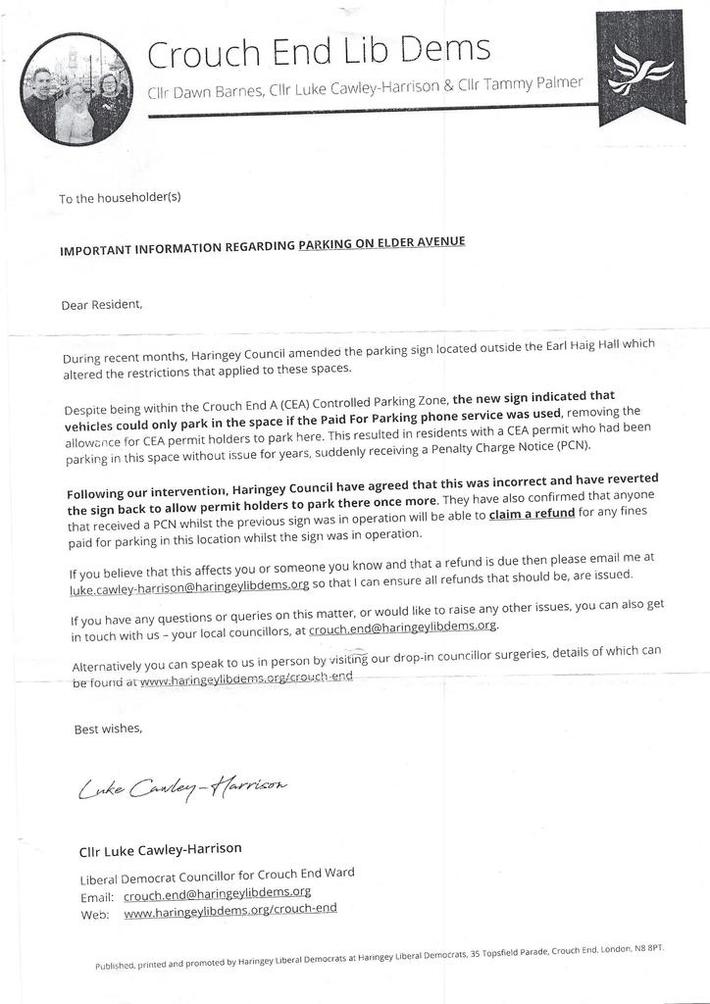