Private Eye has done some research on UK properties which have recently (2005 - 2014) become the property of offshore companies. The Private Eye searchable map of offshore ownership picks up quite a few places in Crouch End which are now owned offshore. The image below is not clickable or searchable, but it shows the sites in question.

Private Eye is pursuing this in the interests of political satire - pointing out the lip service that is being / has been paid by successive governments to the notion that Britain is for the British , and everyone here should pay their taxes with well-gotten gains. This might be a valid criticism of government policy. They are also attempting to identify offshore companies which may launder money, again something which "the government" has attempted to prevent.

Crouch End is no stranger to property ownership from abroad. The Private Eye research only looks at recent acquisitions. I bought my first house in Crouch End (1982) from Nicola Gagliardi, an Italian (PoW I think) , and the house I live in now (in 1996) from Joe Farrugia, an Algerian. Either a lot of properties locally belong to people who aren't originally British, or this is a considerable coincidence. There are today both Turks and Cypriots living nearby, who came here after earlier troubles on Cyprus. For myself I admire the prescience which led to the purchase of run down properties in a temporarily unfashionable area, but which are now much sought after.

During the lap dancing episode of 2010 I looked up the ownership of the Salvation Army Citadel (now Arthouse). At that time it belonged to the Pikis family of Cyprus under Land Registry Title Number : NGL363908. and according to ZoopLa it has not changed hands since 2000 so presumably still does. 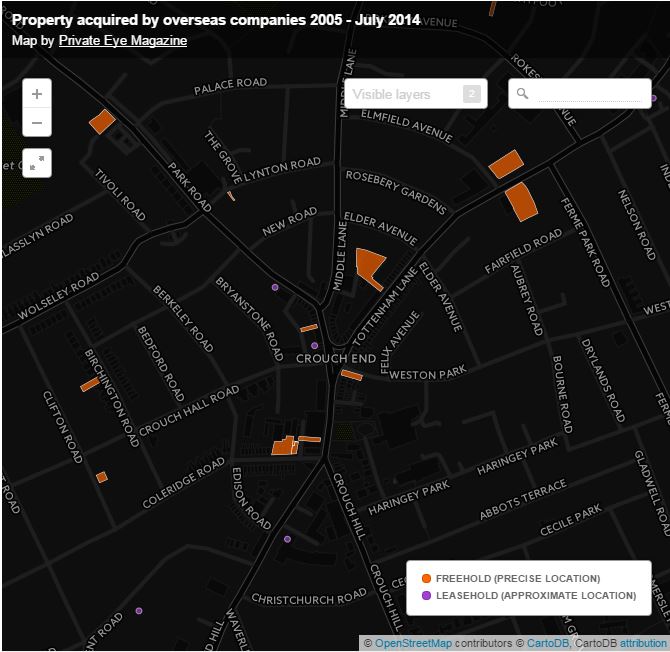