Conservation, nostalgia and the march of progress

There is a petition doing the rounds just at present headed " Help Make Conservation Matter In Crouch End".

I find myself somewhat out of tune with it. I ride up and down Shepherd's Hill usually twice a week, and  the buildings in question are undistinguished, grey brick slabs, with few notable features, almost entirely hidden by trees. I might notice as they were being demolished, because of the skips and the lorries coming and going, but thereafter probably not.

I can't bring myself to support the campaigners' pleas. Indeed I rather take the view that the stretch of Shepherd's Hill from MonteNotte up to Coolhurst is probably mislabelled as a conservation area (CA). There are more buildings in it which are either neutral to the CA (including the buildings in question) or are detractors (it's a lovely spot , with views across the allotments and the Metropolitan Open Space to Ally Pally, and there was a time when developers had a field day building blocks of flats).

So, far from taking up the campaigners' cause, in the long term I'd be inclined to redraw the CA boundary to be rather more meaningful, including mainly or exclusively buildings worthy of being conserved, and, in the short term, simply allow the planning committee to make its determination as it will.

But this does pose a poser for any local conservation interested groups. The petition was started by Richard Downes, who has backed it up with some emotive comments elsewhere on the web. In a blog about the part Shepherd's Hill has played in his life Richard calls on magic, fantasy and sustainability , but I'm afraid, very few conservation principles , to urge signature of the petition. In a response to a Facebook posting Mr Downes attempts a little social media blackmail. Neither of which efforts do anything to convince me. 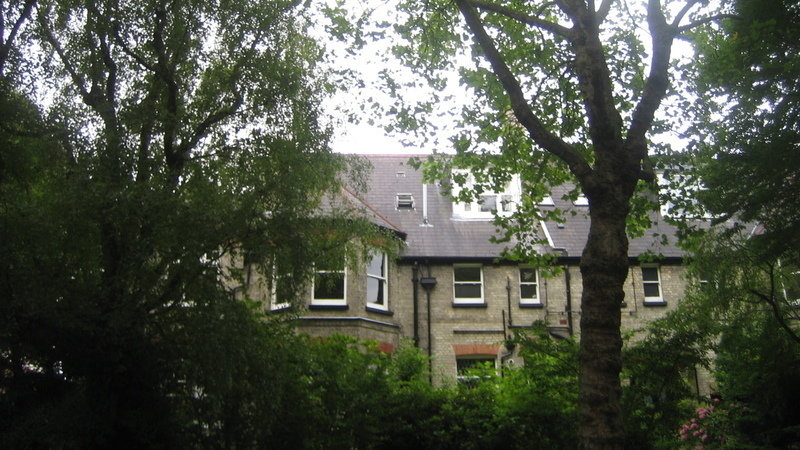 This is the image the campaigners have chosen to illustrate their case.

I honestly think this could go either way.

Whether the proposed new development is up to standard is a moot point. If it is judged to do harm, to be a detractor - then it's back to the drawing board for the developers on those grounds alone. Certainly both Highgate Conservation Area Advisory Committee and Highgate Society think it falls short ("better suited to a commercial office block in an inner urban setting").

Whether the existing building is a candidate for demolition seems at first glance to be odds on - it is a 'neutral' contributor, and even in a CA the presumption is for sustainable development. But, but ...  the CA appraisal itself has an alternative view, and describes the existing section of the CA as being solely there to protect the surviving Victorian houses.

The Victorian Society have just weighed in -

"The Victorian Society has been alerted to this application and we wish to register our objection to the proposals. Having examined the submitted plans and documents, we fully endorse the comments made by the Highgate Society on this application. Crouch End was predominantly developed in the late nineteenth century and demolishing an attractive building of this period will obviously not sustain the character of the Conservation Area. The proposals would therefore entail a high level of harm to Crouch End Conservation Area and the application should be refused on these grounds."

I really don't understand the planning laws in this country. Why should these types of building works be allowed if you know they're going to cause damage to neighboring homes? The plans don't even include a Basement Impact Assessment. Madness.  If I were somebody living close to the proposed works I'd be very, very worried.

The Crouch End Neighbourhood Forum made a very considered objection to this planning application, which concludes:

. . . . "the Forum feels that the decision on the application rests on a consideration of the quality of the proposed scheme, and that the replacement be judged on whether it preserves or enhances the character or appearance of the Conservation Area.

Here the case for the new build is on unsure footing. The proposed block matches the neighbouring blocks of flats in scale, height and massing – surrounding blocks that are all listed as 'detractors' in the CA Appraisal and cannot be employed as desirable precedent. We also note the opinions expressed elsewhere that the design of the replacement block falls short of the standard required by the CA, and will fail therefore to positively contribute to local character and distinctiveness. Furthermore the undeniably positive value of the existing arrangement lies in its scale, the break it supplies to the line of high blocks of flats along the street, and especially in the green and well planted setting fronting Shepherd's Hill. These features should be retained.

While some increase in the number of dwellings is supportable, we note that no affordable housing is proposed for the site.

Consequently although the developer's case is arguable, on balance we feel that the current scheme is of insufficient quality, will cause harm to the Conservation Area and should therefore be refused."

Many thanks for promo-ing the petition regardless of your personal support.

October is the latest date for a decision

When I started the petition I knew very little about planing and/or conservation.
I'm not of a view that I should apologise for my use of more creative methods if it is all that i had to bring to the table at the time
It has been a long struggle to keep up and I'm still lacking the articulatory skills of the CENF, Highgate and Victorian Societies, whose support has been much appreciated, in this area; which is why I'd have appreciated seeing these comments when they were printed as I'm sure i'd have learned much more from OpinioN8.