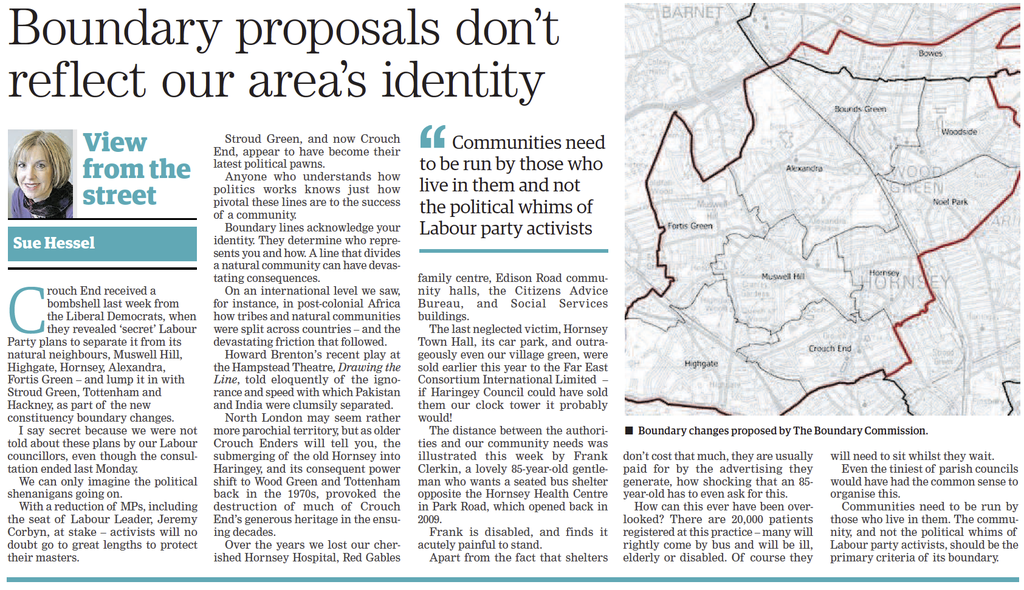 And as Sue points out , all done with the greatest possible discretion.

The maps below created from the 'secret' documents by Mark

The text of Sue's piece

Boundary proposals don’t reflect our area’s identity
Crouch End received a bombshell last week from tl1e Liberal Democrats, when they revealed 'secret` Labour Party plans to separate it from its natural neighbours, Muswell Hill, Highgate, Hornsey, Alexandra, Fortis Green - and lump it in with Struud Green, Tottenham and Hackney as part of the new constituency boundary changes.
I say secret because we were not told about t.hese plans by our Labour councillors, even though the consultation ended last Monday.
We can only imagine the political shenanigans going on.
With a reduction of MPs, including the seat of Labour Leader; Jeremy Corbyn, at stake - activists will no doubt go to great lengths to protect their masters.
Stroud Green, and now Crouch End, appear to have become their latest political pawns. Anyone who understands how politics works knows just how pivotal these lines are to the success of a community.
Boundary lines acknowledge your identity. They determine who represents you and how. A Line that divides a natural community can have devastating consequences.
On an international level we saw for instance, in post-colonial Africa how tribes and natural communities were split across countries — and the devastating friction that followed.
Howard Brenton's recent play at the Hampstead Theatre, Drawing the Line, told eloquently of the igno-rance and speed with which Pakistan and India were clumsily separated.
North London may seem mther more parochial territory but as older Crouch Enders will tell you, the subrnerging of the old Hornsey into Haringey and its consequent power shift to Wood Green and Tottenham back in the 1970s, provoked the destruction nf much of Crouch End's generous heritage in the ensuing decades. Over the years we lost our cherished Hornsey Hospital, Red Gables family centre, Edison Road community halls, the Citizens Advice Bureau, and Social Services buildings, The last neglected victim, Hornsey Town Hall, its car park, and outrageously even our village green, were sold earlier this year to the Far East Consortium International Limited - if Haringey Council could have sold them our clock tower it probably would!
The distance between the authorities and our community needs was illustrated this week by Frank Clerkin, a lovely 85-year-old gentle man who wants a seated bus shelter opposite the Hornsey Health Centre in Park Road, which opened hack in 2009. Frank is disabled, and finds it acutely painful to stand. Apart from the fact that shelters don't cost that much, they are usually paid for by the advertising they generate, how shncking that an 85 year-old has to even ask for this.
How can this ever have been over looked?
There are 20,000 patients registered at this practice — many will rightly come by bus and will be will be elderly or disabled. Of course they will need to sit whilst they wait. Even the tiniest of parish councils would have had the common sense to organise this. Communities need to be run by those who live in them. The community and not the political whims of Labour party activists, should be the primary criteria of its boundary.