Santander has just announced the closure of 140 branches. This includes the Crouch End branch, which will close on 4 July.

Rob's note is simply factual. There is a posting on Facebook which is oddly self centred - bemoaning the loss of the branch and the creation of an empty shop. Generally when Crouch Enders are not being complacent they are mawkishly sentimental - so major topics are ignored until they become a crisis, as , at present the Liveable proposals and the Boundary Commission largely are, or lost cats get shared over and over, or meaningless platitudes about dead actors multiply. In some ways this simple complaint is quite refreshing.

Presumably the staff in the branch will be losers. Not all of them can be redeployed to other branches so presumably some will get the sack, both the local staff and the Spanish ex-pats. At least in the brave new post-Brexit world in a prosperous Britain, there will be many other opportunities for them.

And the loss is not all that great. In terms of convenience there are nearby branches. Odd that Santander pick out the Muswell Hill branch as being closer than Wood Green, Actually it isn't. 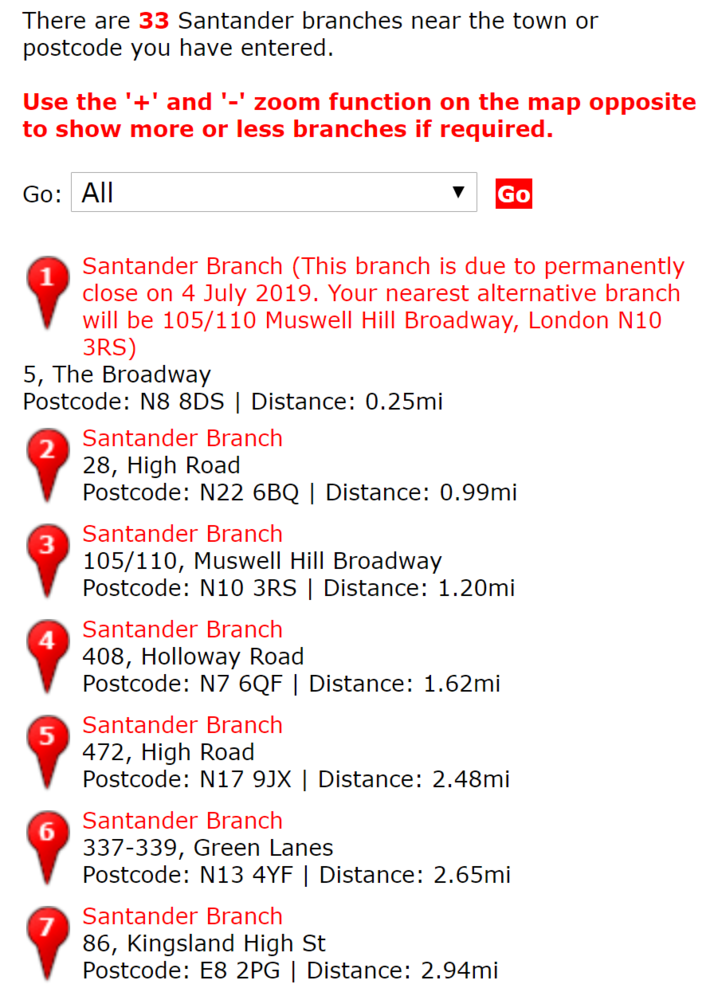 And any way , who uses branches any more? I have been in there from time to time, mainly to prove, again, who I am. I do sometimes see customers at the counter , possibly withdrawing cash, or maybe pursuing some errant transaction. I admit you can't withdraw cash from the internet, but you can make the book entry to transfer funds very easily, and errant transactions are often more conveniently dealt with over the phone or by email.

And as for the loss of a tenant, the branch is on a popular stretch - Oliver Bonas are relatively new tenants and seem to be doing OK. I'm sure someone will pop up to service all those new tenants who will soon be moving in to the Town Hall.

Antic pub, Santander, maybe Evans Cycles... is it too early to launch a 'save our chains' campaign?

I wonder if the Liveable project could accommodate tumbleweed blowing around the clock tower, or FEC could in the Town hall Square.

But I've seen at least 2 pleas for office space on Facebook recently.

Apparently the prices at Sorbet were much higher than the competition. Perhaps they were refusing to join the globalised economy. ...oh, alright, use slaves.

I can't speak for Santander.