Alexandra Palace - dramatic changes to a listed and historic building

The formal planning application for the changes to Alexandra Palace has been submitted and you can find it on this Haringey Planning link. The documents submitted with the application are really quite nicely named and it is possible to home in on the bits you might be interested in.

Given the long standing commitment from Haringey and the trustees of the Alexandra Palace Charity to apply for UNESCO world heritage status I have looked at the proposed First Floor East Wing plan. This has rooms called Marconi EMI Studio, Gallery and Baird Studio, These are large spaces.

The document Heritage Statement Appendix 2 plans documents the development of these spaces over the years and has lots of detail on the shape and uses of the rooms.

It seems the proposal is to remove these historic studios altogether, and to replace them with large modern open spaces, and lavatories. This will entirely destroy any chance of achieving UNESCO World Heritage status, and remove the opportunity to explore the studios, dressing rooms and make up areas used for very many early BBC broadcasts. Replacing these with an exciting audio visual display, and a few documents does not seem a fair exchange.

I believe that Haringey should stick to its commitment to pursue the Heritage listing and reject thos portion of the proposals.

will be replaced with this bland modern space You can submit your comments to Haringey on this link

The proposal to replace the historic BBC studios with a bland and modern replacement shpuld not be allowed. It runs counter to the principles of conservation, it breaches the council's own undertaking to apply for UNESCO world heritage status, and destroys a large part of the borough's historic legacy

nothing remains except the space on the balcony where it once was.

The walls I described enclose this space, that contained the IFT.

It probably needs to be made water-tight.

There are many parallels between television at our Ally Pally Trust and code-breaking at the Bletchley Park Trust. Both were built under pressure and both featured ground-breaking technology.

However, there's a parallel between the equipment and the spaces that enclosed that equipment. At Bletchley the sheds behind the Victorian mansion were thrown up and were only ever intended to be temporary. They were in a poor state of repair. Some would have seen them destroyed.

Thanks to the BP Trust, the Colossus Computer was rebuilt from scratch and in situ. In an ugly tatty old pre-fab shed that lacks symmetry!

And since the space and symbol has been restored, Bletchley has seen a feature film made about the code-breaking and the re-habilition of its most famous worker: Alan Turing.

The visitor attraction at AP could fail to succeed if all presented is modern fashionable electronic wizardry ... and practically nothing is original.

Colin, I've attached photos of the Baird Studio and the adjacent rooms.

Photos 31.1 to 31.6 (inclusive) show views of the associated areas with compass indictors too.

The "BBC Photographic Report" is I believe part of the Planning Application that you may have seen.

I had to lop off the (not important) penultimate page in order to keep the file size below 5 mb.

Thanks Clive. Yes, these include the relevant photos. Figure 31.3 on page 21 shows where your booth/ room would have been. There is no evidence of it now in this derelict closed-off space between the wall of Studio B (which can be seen through the open door) and the bricked-in arches.

On the contrary, in 31.3 you can see the space in the wall where the booth protruded into the studio; the tap that supplied the water.. not pretty, but industrial archeology rarely is ...

But who cares about a scientific milestone, as long as the arts graduates at English Heritage and the nimbies get their Victorian arches back

A reconstruction may be possible, as HLF is intended to attract other grants, and the restoration should allow for that. Taking the character of the Studios away thru modernisation is scandalous. Its like Bletchley Park without the huts.

English Heritage have a management agreement with the Alexandra Palace Trust Board according to the Grade 2 Listing report in 2012, so Im not sure how impartial Ms Brady is.

When Ms Brady refers to "an earlier and more important phase" in the "evolution of the building", exactly which earlier historical period is more important than the 1936 to 1939 period of the SE wing?

Does anyone agree with Clare Brady of EH, that opening the Victorian windows that housed a tea room is more important than the birthplace of modern TV?

Adrian, thank you for this succinct summary of the issues. I wrote the recent article in the Ham and High about the proposals: “Let’s conserve the Studios, warts and all”. I argued that it boils down to which is more important in world history, an interesting survival of Victorian exhibition buildings, or the cultural milestone which was the 1936 BBC Television Station, site of the world’s first regular public HD (=broadcastable) television service. When I first came to live in the area I was amazed it still survived. (Only found out after seeing a letter to the Times from Ken Gay of the Hornsey Historical Society and some journalistic delving - they were a well-kept secret).

English Heritage for years refused to list the building – their arts graduates decided it was not architecturally (=aesthetically)  important enough. I, HHS and others pointed out that this was somewhat missing the point. Eventually they gave in and in 1996 grudgingly listed it but only Grade II, against pressure from the then palace management. A further application for Grade II* - supported by the Beeb – was disdainfully refused.

As Lynne has mentioned in the above post, EH, still sulking,  has just come out with the extraordinary opinion to the Haringey planning committee that it’s fine to demolish the 1936 bricking on the arches that defined the boundaries of the studios, and so effectively irrevocably destroy their integrity, as it .." will reinstate the integrity and quality of an earlier and more important phase in the evolution of the building .".

The “earlier and more important phase” of this part of the building being Victorian tea-rooms.

To coin a phrase, EH still don’t get it…scientific industrial heritage is obviously not their cup of tea ..

These Alexandra Palace plans have now gone through unchanged, and Heritage Lottery Funding has been granted 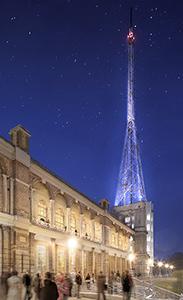