The 2nd meeting I went to on Wednesday was the Development Management Forum for the planning application at 161 Tottenham Lane (For the Hornsey Town Hall meeting see here).

This was a minor success for the almost formed Crouch End Neighbourhood Forum as it was scheduled in a direct response to their email to the Chair of the Planning sub-committee.
By contrast to the Hornsey Town hall meeting this was:
1) Open to all and well attended
2) Well organised - apart from a small glitch over the start time which was beautifully handled by everyone
3) Actively managed by a very professional team from the developer's architects and consultants
4) Characterised by questions both brief and to the point
5) Well supported by even more residents than were actively present by means of a proxy
6) Good tempered and productive
The views I took away with me were
1) The developers have responded in a variety if ways to residents' concerns
2) Residents will recognise that changes have been made but will still not be happy with the proposals
Particular problems will be :
My own view is that a block of flats on top of a terrace of houses accessible only to non-car owners through a covered enclosed alley way where the rubbish and recycling wheely bins are kept will not be an attractive place to live, so it will attract transient tenants who care rather less for their surroundings than if it were a truly attractive development.
I hold out no hope at all that a management company will maintain the living roofs and green walls, nor the general tidiness and loveliness of the buildings.
It is thus the over development aspects that concern me, yet the very capable architects and designers have checked minimum standards and clearances and overlookings and living to utility space ratios, and have presumably got the numbers right. If so the planning department may have little choice but to accept the plans.
The scale model did nothing to reassure me 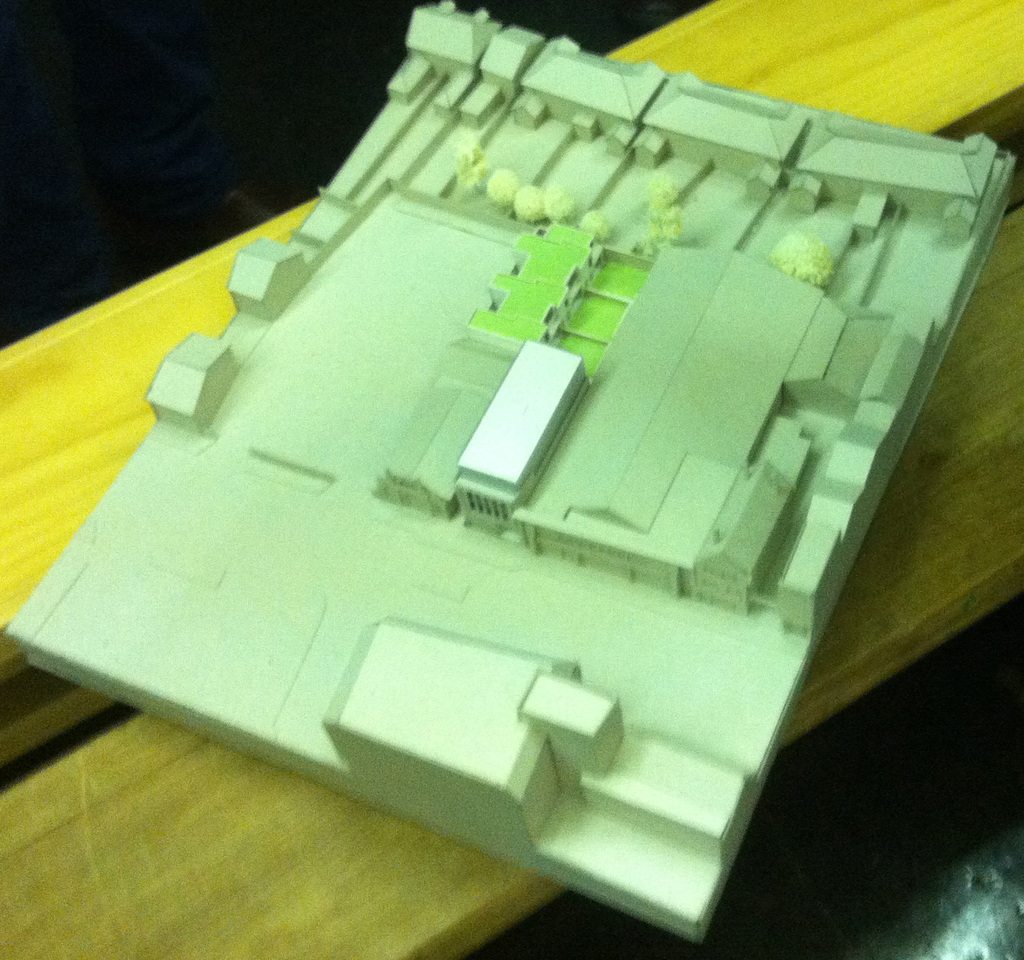 I have submitted these objections to the planning department

A) Height and mass of proposed front block on Tottenham Lane
i.Double height - a predominantly 2 storey building would become a 4 storey one
ii.Out of scale with adjacent buildings; it would tower over the Crouch End Arthouse (former Citadel). It would be higher than Kwit Fit too.
iii.It would create a ‘canyon’ with the former old Citadel dwarfed between this proposed building and the new development planned for the car wash (159 Tottenham Lane).
iv. The developers have repeatedly compared the mass of the building with the YMCA and Rosebery House soon to be replaced by a cinema - this is a false comparison - the measure should be the adjacent conservation area and the addition proposed to include the arcades of shops (Elder Avenue to Rosebery Gardens) and opposite - dubbed the "gateway to Crouch End"

B) Position of proposed rear houses
i. Intrusive House wall built right up to the Conservation Area boundary
ii.Large tree at corner of 24 Fairfield Road garden would inevitably be lost.
iii.Proposed ‘green wall’ would not be maintained from within proposed properties
iv.A revised layout should position amenity space between proposed houses and Fairfield Road gardens.
v.Proposed ‘green wall and roof’ would not be maintained by the proposed management company, nor by the transient occupants the propoerties would attract

C) Poor visual design
i.Front building features an unattractive 2-storey cube on the top of a building with some character
ii.Overall cube / flat roof design is out of keeping with surrounding architecture
ii) the only access to any of the dwellings is through a narrow locked alleyway with spaces set aside for bikes, refuse and recycling bins - this will render the propoertise unattractive to owner occupiers

D) Fire Escape route replaced by houses
An existing fire escape/ access route between 159 and 161 Tottenham Lane (which was included in approved plans for 159) would be lost, meaning the only access to the rear of the building and the three houses crammed into the current car park would be via a narrow passage through the front building. Clarification is needed from the Developers & Fire Brigade.

E) Pressure on local parking
1) The development includes 9 units but no parking spaces.
2) absence of parking will deter owner occupiers