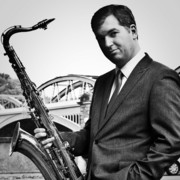 Described by the late Humphrey Lyttelton as ‘formidable’, Simon Spillett is a British jazz saxophonist who leads his own quartet featuring John Critchinson (piano), Alec Dankworth (bass) and Clark Tracey (drums). He has won several awards for his music, including the tenor saxophone category of the British Jazz Awards (2011), Jazz Journal magazine’s Critic’s Choice CD of the Year (2009) and Rising Star in the BBC Jazz Awards (2007).

To book your tickets visit our Eventbrite

RSVP for Jazz at Karamel:Simon Spillet to add comments!

Collage Arts has decided to hide the list of guests.